Encyclopedia
Zivildienst is the civilian branch of the national service systems in Austria
Austria
Austria , officially the Republic of Austria , is a landlocked country of roughly 8.4 million people in Central Europe. It is bordered by the Czech Republic and Germany to the north, Slovakia and Hungary to the east, Slovenia and Italy to the south, and Switzerland and Liechtenstein to the...
and Switzerland
Switzerland
Switzerland name of one of the Swiss cantons. ; ; ; or ), in its full name the Swiss Confederation , is a federal republic consisting of 26 cantons, with Bern as the seat of the federal authorities. The country is situated in Western Europe,Or Central Europe depending on the definition....
. In Germany
Germany
Germany , officially the Federal Republic of Germany , is a federal parliamentary republic in Europe. The country consists of 16 states while the capital and largest city is Berlin. Germany covers an area of 357,021 km2 and has a largely temperate seasonal climate...
as well Zivildienst was the alternative service to military service until suspension of conscription in 2011. It is a means for conscripted
Conscription
Conscription is the compulsory enlistment of people in some sort of national service, most often military service. Conscription dates back to antiquity and continues in some countries to the present day under various names...
persons who are conscientious objector
Conscientious objector
A conscientious objector is an "individual who has claimed the right to refuse to perform military service" on the grounds of freedom of thought, conscience, and/or religion....
s to fulfill their national service
National service
National service is a common name for mandatory government service programmes . The term became common British usage during and for some years following the Second World War. Many young people spent one or more years in such programmes...
, typically in the fields of social work (e.g. hospital
Hospital
A hospital is a health care institution providing patient treatment by specialized staff and equipment. Hospitals often, but not always, provide for inpatient care or longer-term patient stays....
s, retirement home
Retirement home
A retirement home is a multi-residence housing facility intended for senior citizens. Typically each person or couple in the home has an apartment-style room or suite of rooms. Additional facilities are provided within the building, including facilities for meals, gathering, recreation, and some...
s, emergency medical services
Emergency medical services
Emergency medical services are a type of emergency service dedicated to providing out-of-hospital acute medical care and/or transport to definitive care, to patients with illnesses and injuries which the patient, or the medical practitioner, believes constitutes a medical emergency...
) and, although rarely, environmental protection
Environmental protection
Environmental protection is a practice of protecting the environment, on individual, organizational or governmental level, for the benefit of the natural environment and humans. Due to the pressures of population and our technology the biophysical environment is being degraded, sometimes permanently...
, agriculture
Agriculture
Agriculture is the cultivation of animals, plants, fungi and other life forms for food, fiber, and other products used to sustain life. Agriculture was the key implement in the rise of sedentary human civilization, whereby farming of domesticated species created food surpluses that nurtured the...
, and public administration
Public administration
Public Administration houses the implementation of government policy and an academic discipline that studies this implementation and that prepares civil servants for this work. As a "field of inquiry with a diverse scope" its "fundamental goal.....
. As such, it is exempt from the general ban of forced labor by the European Convention on Human Rights
European Convention on Human Rights
The Convention for the Protection of Human Rights and Fundamental Freedoms is an international treaty to protect human rights and fundamental freedoms in Europe. Drafted in 1950 by the then newly formed Council of Europe, the convention entered into force on 3 September 1953...
. 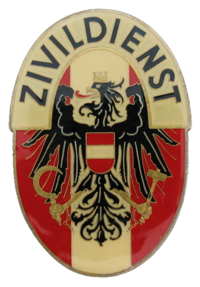 Up until 1975 there was no alternative to the compulsory military service in Austria. In order to discourage people from substituting community service for military service, the conservatives
Austrian People's Party
The Austrian People's Party is a Christian democratic and conservative political party in Austria. A successor to the Christian Social Party of the late 19th and early 20th centuries, it is similar to the Christian Democratic Union of Germany in terms of ideology...
introduced a committee which met with every man who wanted to do community service. The only accepted reason for avoiding military service was pacifism. In an effort to guide the applicants to the military service, questions like the following were asked: "Going for a walk in the woods, a stranger appears and rapes your girlfriend. How do you react?". Depending on one's reaction they had several options of refusing the application to serve community service.

Simply asserting that one was a pacifist was not enough. One had to thoroughly and rationally explain that one had weighed every argument (on the topic of violence), with the most satisfactory result being pacifism. Immaturity or naivety could be grounds for declining the application and potential candidates criminal record had to be impeccable.

Entrants would either serve in the community for 12 months, or military for 8 months. Candidates completing community service were then barred entry to the police force, as this would contradict one's claims of being a pacifist.

The amendment of 1991 ruled that individuals serving community service were prohibited from owning any weapon for 20 years after their community service (It should be noted that this ban does not extend to individuals barred from military service on medical or psychological grounds, though in the latter case, other laws may apply and a ban may be imposed). It also disbanded the committee and simplified the process individuals had to go through to serve community service.

The 1997 amendment introduced a holiday entitlement of 2 weeks for everybody serving community service, and extended the duration one had to serve to 12 months.

A recent amendment of 2005 reduced the duration of the military and community service to 6 and 9 months respectively.
Currently the applicant can choose one of several organisations (mainly NGOs) at which he wants to serve.

Most popular choices are serving at one of several emergency medical services (usually serving as a paramedic) and nursing homes. Other options include serving at hospitals, charity organizations or in several ministries.

Zivildienst was the most common alternative to conscription in the German armed forces, the Bundeswehr
Bundeswehr
The Bundeswehr consists of the unified armed forces of Germany and their civil administration and procurement authorities...
before conscription was suspended for peacetime in 2011. Drafted persons had to file a petition along with an essay describing the reasons, in order to become recognized as an objector. The "recognized objector" (anerkannter Kriegsdienstverweigerer) could then either negotiate for an accredited service institution himself, or be assigned an institution.

Since its creation on October 10, 1973 the Bundesamt für den Zivildienst (BAZ) (Federal Office for Civilian Service) was responsible for the petitions, the recognized objectors, and the accreditation of the institutions (and more) by law (mainly Zivildienstgesetz (ZDG)). In 2011 it was renamed in Bundesamt für Familie und zivilgesellschaftliche Aufgaben (BAFzA) (Federal Office for Family and Civil Society Duties) and is now responsible for the Bundesfreiwilligendienst (BFD) (Federal Volunteer Service), a voluntary social service after the suspention of conscription in 2011.

Currently, the German Zivildienst is suspended, same as the Wehrdienst (military service). It is not abolished since this would require a change of the German Constitution.