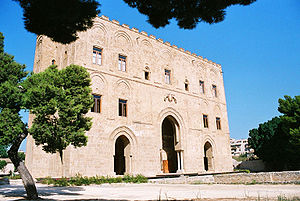 The Zisa is a castle in the western part of Palermo
Palermo
Palermo is a city in Southern Italy, the capital of both the autonomous region of Sicily and the Province of Palermo. The city is noted for its history, culture, architecture and gastronomy, playing an important role throughout much of its existence; it is over 2,700 years old...
, Sicily
Sicily
Sicily is a region of Italy, and is the largest island in the Mediterranean Sea. Along with the surrounding minor islands, it constitutes an autonomous region of Italy, the Regione Autonoma Siciliana Sicily has a rich and unique culture, especially with regard to the arts, music, literature,...
.

The construction was begun in the 12th century by Arabian craftsmen for king William I of Sicily
William I of Sicily
William I , called the Bad or the Wicked, was the second king of Sicily, ruling from his father's death in 1154 to his own...
, and completed by his son William II
William II of Sicily
William II , called the Good, was king of Sicily from 1166 to 1189. William's character is very indistinct. Lacking in military enterprise, secluded and pleasure-loving, he seldom emerged from his palace life at Palermo. Yet his reign is marked by an ambitious foreign policy and a vigorous diplomacy...
. The edifice had been conceived as summer residence for the Norman
Italo-Norman
The Italo-Normans, or Siculo-Normans when referring to Sicily, were the Italian-born descendants of the first Norman conquerors to travel to the southern Italy in the first half of the eleventh century...
kings, as a part of the large hunting resort known as Genoard ("Paradise on Earth") that included also the Cuba Sottana
Cuba, Palermo
The Cuba is a palace in the Sicilian city of Palermo. It was built in 1180 by William II of Sicily in his great Royal Park, as his personal recreation pavilion, together with an artificial lake: it shows strong Fatimid art influences, as it was designed and decorated by Arab artists still living...
, the Cuba Soprana and the Uscibene palace.

The Zisa is clearly inspired by Moorish architecture. The name Zisa itself derives from the Arab term al-Azîz, meaning "noble", "glorious", "magnificent". The same word, in Naskh
Naskh (script)
Naskh is a specific calligraphic style for writing in the Arabic alphabet, thought to be invented by the Iranian calligrapher Ibn Muqlah Shirazi . The root of this Arabic term means "to copy". It either refers to the fact that it replaced its predecessor, Kufic script, or that this style allows...
script, is impressed in the entrance, according to the usual habit for the main Islamic edifices of the time. 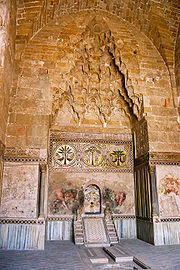 In the 14th century merlon
Merlon
In architecture, a merlon forms the solid part of an embattled parapet, sometimes pierced by embrasures. The space between two merlons is usually called a crenel, although those later designed and used for cannons were called embrasures.-Etymology:...
s were added, by partly destroying the Arab inscription (in Kufic
Kufic
Kufic is the oldest calligraphic form of the various Arabic scripts and consists of a modified form of the old Nabataean script. Its name is derived from the city of Kufa, Iraq, although it was known in Mesopotamia at least 100 years before the foundation of Kufa. At the time of the emergence of...
characters) which embellished the upper part of the edifice. More substantial modifications were introduced in the 17th century, when the Zisa, reduced to very poor conditions, was purchased by Giovanni di Sandoval e Platamone, Marquis of S. Giovanni la Mendola, Prince of Castelreale, Lord of the Mezzagrana and the Zisa. The latter's marble coat of arms with two lions can be seen over the entrance fornix. Several rooms of the interior were modified and others added on the ceiling, a great stair was built, as well as new external windows.

From 1808 to the 1950s the building was used a residence by the counts Notabartolo di Sciara. Acquired by the Region of Sicilia and restored in the 1970s and 1980s (the Northern part had crumbled down in 1971 and has been rebuilt along the original lines), the Zisa today is opened to tourists. Some rooms houses Islamic art pieces, tools and artifacts from the Mediterranean area. The most notable room is the central hall, with a mosaic decoration; once it had a fountain too, from which the water flowed outside.
The source of this article is wikipedia, the free encyclopedia.  The text of this article is licensed under the GFDL.