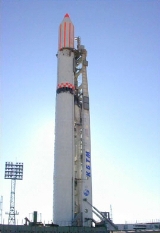 Encyclopedia
The Zenit-2 is a Ukrainian
Ukraine
Ukraine is a country in Eastern Europe. It has an area of 603,628 km², making it the second largest contiguous country on the European continent, after Russia...
, previously Soviet
Soviet Union
The Soviet Union , officially the Union of Soviet Socialist Republics , was a constitutionally socialist state that existed in Eurasia between 1922 and 1991....
, expendable
Expendable launch system
An expendable launch system is a launch system that uses an expendable launch vehicle to carry a payload into space. The vehicles used in expendable launch systems are designed to be used only once , and their components are not recovered for re-use after launch...
carrier rocket. First flown in 1985, it has been launched 37 times, with six failures. It is a member of the Zenit family of rockets, and was designed by the Yuzhnoye Design Bureau
Yuzhnoye Design Bureau
Yuzhnoye Design Bureau , located in Dnipropetrovsk, Ukraine, is a designer of satellites and rockets, and formerly of Soviet intercontinental ballistic missiles established by Mikhail Yangel. Yuzhnoye's OKB designation was OKB-586....
. A modified version, the Zenit-2S, is used as the first two stages of the Sea Launch
Sea Launch
Sea Launch is a spacecraft launch service that uses a mobile sea platform for equatorial launches of commercial payloads on specialized Zenit 3SL rockets...
Zenit-3SL
Zenit-3SL
The Zenit-3SL is an expendable carrier rocket operated by Sea Launch. First flown in 1999, it has been launched 30 times, with two failures and one partial failure. It is a member of the Zenit family of rockets, and is built by the Yuzhnoye Design Bureau. RKK Energia produces the Block DM-SL upper...
rocket. Launches of Zenit-2 rockets are conducted from Baikonur Cosmodrome
Baikonur Cosmodrome
The Baikonur Cosmodrome , also called Tyuratam, is the world's first and largest operational space launch facility. It is located in the desert steppe of Kazakhstan, about east of the Aral Sea, north of the Syr Darya river, near Tyuratam railway station, at 90 meters above sea level...
Site 45/1
Baikonur Cosmodrome Site 45
Site 45 at the Baikonur Cosmodrome is a launch site used by Zenit rockets. It consists of two pads, one of which is still in use. It has been the launch site for all Soviet and Russian government Zenit launches, along with a commercial launch conducted for Globalstar in 1998, and continuing...
. A second pad, 45/2, was also constructed, but was only used for two launches before being destroyed in an explosion. A third pad, Site 35 at the Plesetsk Cosmodrome
Plesetsk Cosmodrome
Plesetsk Cosmodrome is a Russian spaceport, located in Arkhangelsk Oblast, about 800 km north of Moscow and approximately 200 km south of Arkhangelsk.-Overview:...
was never completed, and work was abandoned after the dissolution of the Soviet Union
Dissolution of the Soviet Union
The dissolution of the Soviet Union was the disintegration of the federal political structures and central government of the Union of Soviet Socialist Republics , resulting in the independence of all fifteen republics of the Soviet Union between March 11, 1990 and December 25, 1991...
.

The Zenit-2 is currently being replaced by the Zenit-2M
Zenit-2M
The Zenit-2M, Zenit-2SB or Zenit-2SLB is an Ukrainian expendable carrier rocket derived from the Zenit-3SL. It is a member of the Zenit family of rockets, which were designed by the Yuzhnoye Design Bureau...
, which incorporates enhancements made during the development of the Zenit-3SL, and it is unclear whether any remain to be launched. The Zenit-2 has a fairly low flight rate as the Russia
Russia
Russia or , officially known as both Russia and the Russian Federation , is a country in northern Eurasia. It is a federal semi-presidential republic, comprising 83 federal subjects...
n government usually avoids flying national security payloads on Ukrainian rockets.

During the late 1990s, the Zenit-2 was marketed for commercial launches. Only one such launch was conducted, with a group of Globalstar
Globalstar
Globalstar is a low Earth orbit satellite constellation for satellite phone and low-speed data communications, somewhat similar to the Iridium satellite constellation and Orbcomm satellite systems.-History:...
satellites, which ended in failure after a computer error resulted in the premature cutoff of the second stage.
The source of this article is wikipedia, the free encyclopedia.  The text of this article is licensed under the GFDL.