Encyclopedia
The zemsky sobor was the first Russia
Russia
Russia or , officially known as both Russia and the Russian Federation , is a country in northern Eurasia. It is a federal semi-presidential republic, comprising 83 federal subjects...
n parliament
Parliament
A parliament is a legislature, especially in those countries whose system of government is based on the Westminster system modeled after that of the United Kingdom. The name is derived from the French , the action of parler : a parlement is a discussion. The term came to mean a meeting at which...
of the feudal Estates type, in the 16th and 17th centuries. The term roughly means assembly of the land. 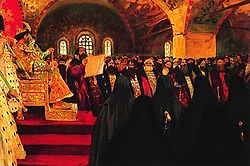 It could be summoned either by tsar
Tsar
Tsar is a title used to designate certain European Slavic monarchs or supreme rulers. As a system of government in the Tsardom of Russia and Russian Empire, it is known as Tsarist autocracy, or Tsarism...
, or patriarch
Patriarch
Originally a patriarch was a man who exercised autocratic authority as a pater familias over an extended family. The system of such rule of families by senior males is called patriarchy. This is a Greek word, a compound of πατριά , "lineage, descent", esp...
, or the Boyar Duma. Three categories of population participated in the assembly:

The first zemsky sobor was held by tsar Ivan the Terrible in 1549. During his reign he held a number of such gatherings and they became a common tool used to enact major pieces of legislation or to decide controversial issues. Although the Sobors were primarily a tool used to rubberstamp decisions that Ivan had already made, sometimes initiative was taken by the lower nobility and townsfolk. For instance, the tsar was scandalized when the assembly of 1566 asked him to abolish the Oprichnina
Oprichnina
The oprichnina is the period of Russian history between Tsar Ivan the Terrible's 1565 initiation and his 1572 disbanding of a domestic policy of secret police, mass repressions, public executions, and confiscation of land from Russian aristocrats...
.

When the Rurik Dynasty
Rurik Dynasty
The Rurik dynasty or Rurikids was a dynasty founded by the Varangian prince Rurik, who established himself in Novgorod around the year 862 AD...
died out in 1598 it was a sobor that appointed Boris Godunov
Boris Godunov
Boris Fyodorovich Godunov was de facto regent of Russia from c. 1585 to 1598 and then the first non-Rurikid tsar from 1598 to 1605. The end of his reign saw Russia descend into the Time of Troubles.-Early years:...
as the next tsar. Another grand council, featuring even peasants, elected Mikhail Romanov to take the throne in 1613 after the Time of Troubles
Time of Troubles
The Time of Troubles was a period of Russian history comprising the years of interregnum between the death of the last Russian Tsar of the Rurik Dynasty, Feodor Ivanovich, in 1598, and the establishment of the Romanov Dynasty in 1613. In 1601-1603, Russia suffered a famine that killed one-third...
. During Mikhail's reign, when the Romanov dynasty was still weak, such assemblies were summoned annually.

Once the Romanovs were firmly in power, however, the sobor gradually lost its power. A major council assembled to ratify the Treaty of Pereyaslav
Treaty of Pereyaslav
The Treaty of Pereyaslav is known in history more as the Council of Pereiaslav.Council of Pereyalslav was a meeting between the representative of the Russian Tsar, Prince Vasili Baturlin who presented a royal decree, and Bohdan Khmelnytsky as the leader of Cossack Hetmanate. During the council...
in 1654 was the last for thirty years. The last sobors were held by the great Galitzine
Galitzine
For Orthodox clergyman and theologian, see Alexander Golitzin.The Galitzines are one of the largest and noblest princely houses of Russia. Since the extinction of the Korecki family in the 17th century, the Golitsyns have claimed dynastic seniority in the House of Gediminas...
in 1682, to abolish the mestnichestvo
Mestnichestvo
In Russian history, Mestnichestvo was a feudal hierarchical system in Russia from the 15th to 17th centuries. Mestnichestvo revolved around a simple principle: the boyar who estimated that his origins were more ancient and his personal services to the tsar more valuable could claim a higher state...
, and in 1684, to ratify the "Eternal Peace" with Poland
Eternal Peace Treaty of 1686
The Eternal Peace Treaty of 1686 was a treaty between Tsardom of Russia and Polish-Lithuanian Commonwealth, signed by Polish-Lithuanian Commonwealth envoys: voivod of Poznań Krzysztof Grzymułtowski and chancellor of Lithuania Marcjan Ogiński and Russian knyaz Vasily Vasilyevich...
.

Four years after the death of the last Russian tsar, on July 23, 1922, General M.K. Dieterichs of the Far Eastern White Army
White movement
The White movement and its military arm the White Army - known as the White Guard or the Whites - was a loose confederation of Anti-Communist forces.The movement comprised one of the politico-military Russian forces who fought...
convened the Zemsky Sobor of Amur region (Приамурский Земский Собор) in Vladivostok
Vladivostok
The city is located in the southern extremity of Muravyov-Amursky Peninsula, which is about 30 km long and approximately 12 km wide.The highest point is Mount Kholodilnik, the height of which is 257 m...
. This sobor, calling to all Russian people to repent for the overthrow of the tsar, reinstituted a monarchy by naming Grand Duke Nikolai Nikolaievich Romanov as tsar. Patriarch Tikhon
Tikhon of Moscow
Saint Tikhon of Moscow , born Vasily Ivanovich Bellavin , was the 11th Patriarch of Moscow and All Russia of the Russian Orthodox Church during the early years of the Soviet Union, 1917 through 1925.-Early life:...
(who was not present; neither was the Grand Duke) was named as the honorary chairman of the sobor. Two months later the Amur region fell to the Bolsheviks.
The source of this article is wikipedia, the free encyclopedia.  The text of this article is licensed under the GFDL.