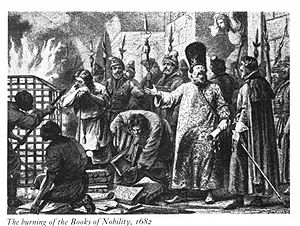 In Russia
Russia
Russia or , officially known as both Russia and the Russian Federation , is a country in northern Eurasia. It is a federal semi-presidential republic, comprising 83 federal subjects...
n history, Mestnichestvo was a feudal hierarchical system in Russia from the 15th to 17th centuries. Mestnichestvo revolved around a simple principle: the boyar
Boyar
A boyar, or bolyar , was a member of the highest rank of the feudal Moscovian, Kievan Rus'ian, Bulgarian, Wallachian, and Moldavian aristocracies, second only to the ruling princes , from the 10th century through the 17th century....
who estimated that his origins were more ancient and his personal services to the tsar
Tsar
Tsar is a title used to designate certain European Slavic monarchs or supreme rulers. As a system of government in the Tsardom of Russia and Russian Empire, it is known as Tsarist autocracy, or Tsarism...
more valuable could claim a higher state post. This often led to bitter disputes and physical violence among nobles about their ancestry and their services to the monarch
Monarch
A monarch is the person who heads a monarchy. This is a form of government in which a state or polity is ruled or controlled by an individual who typically inherits the throne by birth and occasionally rules for life or until abdication...
.

Because of the mestnichestvo, otherwise qualified people who could not boast of sufficiently extended ancestry had no hope of getting an important state post. Additionally, a boyar
Boyar
A boyar, or bolyar , was a member of the highest rank of the feudal Moscovian, Kievan Rus'ian, Bulgarian, Wallachian, and Moldavian aristocracies, second only to the ruling princes , from the 10th century through the 17th century....
from an old and respected family could get an important promotion even if personally unqualified.

With the developing autocracy
Tsarist autocracy
The Tsarist autocracy |transcr.]] tsarskoye samoderzhaviye) refers to a form of autocracy specific to the Grand Duchy of Muscovy . In a tsarist autocracy, all power and wealth is controlled by the tsar...
, where the core principle was the creation of a central bureaucracy
Bureaucracy
A bureaucracy is an organization of non-elected officials of a governmental or organization who implement the rules, laws, and functions of their institution, and are occasionally characterized by officialism and red tape.-Weberian bureaucracy:...
reporting directly to the tsar, the role of the mestnichestvo was progressively reduced. Moreover, increasing defense needs required that the top military posts be occupied by capable officers, not ancestry-proud but inept boyars. Consequently, the mestnichestvo was abolished in 1682 by Feodor III of Russia
Feodor III of Russia
Feodor III Alexeevich of Russia was the Tsar of all Russia between 1676 and 1682....
. The available genealogical data was made public as the so-called Velvet Book
Velvet Book
The Velvet Book is an official compilation of genealogies of Russia's most illustrious families. The book is bound in red velvet, hence the name...
, whereas the ancient pedigree books were burnt, to the great consternation and dismay of established boyar families.

The abolition made it easier later for Peter the Great to reform and govern the state. However, one can not neglect the positive effects as ensuring elite loyalty and thus political cohesion and stability. Also, the state may have had more flexibility in appointments than critics of the system have suggested. Tsars were able to make appointments outside the mestnichestvo system which created positions as bez mest, or "without place".
The source of this article is wikipedia, the free encyclopedia.  The text of this article is licensed under the GFDL.