Encyclopedia
Yury Matveyevich Felten (1730–1801) was a court architect
Architect
An architect is a person trained in the planning, design and oversight of the construction of buildings. To practice architecture means to offer or render services in connection with the design and construction of a building, or group of buildings and the space within the site surrounding the...
to Catherine the Great, Empress of Russia
Russia
Russia or , officially known as both Russia and the Russian Federation , is a country in northern Eurasia. It is a federal semi-presidential republic, comprising 83 federal subjects...
.

In 1744, after the death of his father, Felten moved to Germany. From 1744 to 1749 he studied at Tübingen University, but his financial and personal situation prompted him to move back to St. Petersburg. Felten wrote a letter to Empress Catherine the Great, and she extended her hospitality and scholarship, so he completed studies at the Russian Academy, graduating in 1752 as an architect.

From 1752 to 1762 Felten worked as assistant for architect Bartolomeo Rastrelli
Bartolomeo Rastrelli
Francesco Bartolomeo Rastrelli was an Italian architect naturalized Russian. He developed an easily recognizable style of Late Baroque, both sumptuous and majestic...
during the construction of the Winter Palace
Winter Palace
The Winter Palace in Saint Petersburg, Russia, was, from 1732 to 1917, the official residence of the Russian monarchs. Situated between the Palace Embankment and the Palace Square, adjacent to the site of Peter the Great's original Winter Palace, the present and fourth Winter Palace was built and...
and other buildings in St. Petersburg. During the 1760s and 1770s he designed the complex ensemble of the Palace Square
Palace Square
Palace Square , connecting Nevsky Prospekt with Palace Bridge leading to Vasilievsky Island, is the central city square of St Petersburg and of the former Russian Empire...
, now partially incorporated into the current buildings of the General Staff
General Staff
A military staff, often referred to as General Staff, Army Staff, Navy Staff or Air Staff within the individual services, is a group of officers and enlisted personnel that provides a bi-directional flow of information between a commanding officer and subordinate military units...
. At the same time, he designed the wing of the Hermitage
Hermitage Museum
The State Hermitage is a museum of art and culture in Saint Petersburg, Russia. One of the largest and oldest museums of the world, it was founded in 1764 by Catherine the Great and has been opened to the public since 1852. Its collections, of which only a small part is on permanent display,...
building on the waterfront, and worked on the winter garden on the roof of the Old Hermitage, as well as extended the museum galleries. 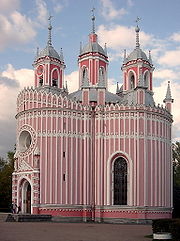 Yuri Felten enjoyed trust and respect from the Empress Catherine the Great. She commissioned him many works at the Catherine Palace
Catherine Palace
The Catherine Palace was the Rococo summer residence of the Russian tsars, located in the town of Tsarskoye Selo , 25 km south-east of St. Petersburg, Russia.- History :...
and park, such as the Zubov
Zubov
Zubov was a Russian noble family which rose to the highest offices of state in the 1790s, when Platon Zubov succeeded Count Orlov and Prince Potemkin as the favourite of Catherine II of Russia....
wing of the Catherine Palace in Tsarskoye Selo
Tsarskoye Selo
Tsarskoye Selo is the town containing a former Russian residence of the imperial family and visiting nobility, located south from the center of St. Petersburg. It is now part of the town of Pushkin and of the World Heritage Site Saint Petersburg and Related Groups of Monuments.-History:In...
, as well as at the Winter Palace and other royal commissions. He also designed two Lutheran churches in central St. Petersburg, the Chesma Palace (destroyed in the Siege of Leningrad
Siege of Leningrad
The Siege of Leningrad, also known as the Leningrad Blockade was a prolonged military operation resulting from the failure of the German Army Group North to capture Leningrad, now known as Saint Petersburg, in the Eastern Front theatre of World War II. It started on 8 September 1941, when the last...
) and the Church of Saint John at Chesme Palace.

Felten was also a reputable inventor and engineer. He built a heavy-lifting machine that moved the enormous granite rock that was the pedestal of the Bronze Horseman
The Bronze Horseman
The Bronze Horseman is an equestrian statue of Peter the Great in Saint Petersburg, Russia. Commissioned by Catherine the Great, it was created by the French sculptor Étienne Maurice Falconet. It is also the name of a narrative poem written by Aleksandr Pushkin about the statue in 1833, widely...
. To this day the pedestal is the largest stone ever moved by man.

It may be argued that his best-known work is not a building but an iron-cast grille of the Summer Garden
Summer Garden
The Summer Garden occupies an island between the Fontanka, Moika, and the Swan Canal in Saint Petersburg and shares its name with the adjacent Summer Palace of Peter the Great.-Original:...
(1783).