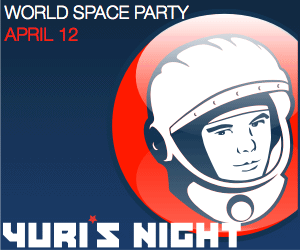 Yuri's Night is an international celebration held on April 12 every year to commemorate space exploration milestones. The event is named for the first human to launch into space, Yuri Gagarin
Yuri Gagarin
Yuri Alekseyevich Gagarin was a Soviet pilot and cosmonaut. He was the first human to journey into outer space, when his Vostok spacecraft completed an orbit of the Earth on April 12, 1961....
, who flew the Vostok 1
Vostok 1
Vostok 1 was the first spaceflight in the Vostok program and the first human spaceflight in history. The Vostok 3KA spacecraft was launched on April 12, 1961. The flight took Yuri Gagarin, a cosmonaut from the Soviet Union, into space. The flight marked the first time that a human entered outer...
spaceship on April 12, 1961. In 2004, people celebrated Yuri's Night in 34 countries in over 75 individual events. Locations have included Los Angeles
Los Angeles, California
Los Angeles , with a population at the 2010 United States Census of 3,792,621, is the most populous city in California, USA and the second most populous in the United States, after New York City. It has an area of , and is located in Southern California...
, Stockholm
Stockholm
Stockholm is the capital and the largest city of Sweden and constitutes the most populated urban area in Scandinavia. Stockholm is the most populous city in Sweden, with a population of 851,155 in the municipality , 1.37 million in the urban area , and around 2.1 million in the metropolitan area...
, Antarctica, the San Francisco Bay Area
San Francisco Bay Area
The San Francisco Bay Area, commonly known as the Bay Area, is a populated region that surrounds the San Francisco and San Pablo estuaries in Northern California. The region encompasses metropolitan areas of San Francisco, Oakland, and San Jose, along with smaller urban and rural areas...
, Tel Aviv
Tel Aviv
Tel Aviv , officially Tel Aviv-Yafo , is the second most populous city in Israel, with a population of 404,400 on a land area of . The city is located on the Israeli Mediterranean coastline in west-central Israel. It is the largest and most populous city in the metropolitan area of Gush Dan, with...
, Tokyo
Tokyo
, ; officially , is one of the 47 prefectures of Japan. Tokyo is the capital of Japan, the center of the Greater Tokyo Area, and the largest metropolitan area of Japan. It is the seat of the Japanese government and the Imperial Palace, and the home of the Japanese Imperial Family...
, and the International Space Station
International Space Station
The International Space Station is a habitable, artificial satellite in low Earth orbit. The ISS follows the Salyut, Almaz, Cosmos, Skylab, and Mir space stations, as the 11th space station launched, not including the Genesis I and II prototypes...
.

The goal of Yuri's Night is to increase public interest in space exploration
Space exploration
Space exploration is the use of space technology to explore outer space. Physical exploration of space is conducted both by human spaceflights and by robotic spacecraft....
and to inspire a new generation of explorers. Driven by space-inspired artistic expression and culminating in a worldwide network of annual celebrations and educational events, Yuri's Night creates a global community of young people committed to shaping the future of space exploration while developing responsible leaders and innovators with a global perspective. These global events are a showcase for elements of culture that embrace space including music, dance, fashion, and art.

Yuri's Night was created by Loretta Hidalgo, George T. Whitesides
George T. Whitesides
George Thomas Whitesides is CEO and President of Virgin Galactic, a firm developing commercial space vehicles. He was previously Chief of Staff of the National Aeronautics and Space Administration, a position to which he was named after serving on the NASA transition team for the incoming Obama...
and Trish Garner. The first Yuri's Night was held on April 12, 2001, on the 40th anniversary of human spaceflight.
This global celebration was preceded by Cosmonautics Day
Cosmonautics Day
Cosmonautics Day is a holiday celebrated in Russia and some other former USSR countries on April 12. This holiday celebrates the first manned space flight made on April 12, 1961 by the 27-year old Soviet cosmonaut Yuri Gagarin. Gagarin circled the Earth for 1 hour and 48 minutes aboard the Vostok...
, which was established in the Soviet Union
Soviet Union
The Soviet Union , officially the Union of Soviet Socialist Republics , was a constitutionally socialist state that existed in Eurasia between 1922 and 1991....
in 1962.

The 2004 event in Los Angeles was attended by over 100 prominent space leaders including author Ray Bradbury
Ray Bradbury
Ray Douglas Bradbury is an American fantasy, horror, science fiction, and mystery writer. Best known for his dystopian novel Fahrenheit 451 and for the science fiction stories gathered together as The Martian Chronicles and The Illustrated Man , Bradbury is one of the most celebrated among 20th...
, space tourist
Space tourism
Space Tourism is space travel for recreational, leisure or business purposes. A number of startup companies have sprung up in recent years, hoping to create a space tourism industry...
Dennis Tito
Dennis Tito
Dennis Anthony Tito is an Italian American engineer and multimillionaire, most widely known as the first space tourist to fund his own trip into space. In mid-2001, he spent nearly eight days in orbit as a crew member of ISS EP-1, a visiting mission to the International Space Station...
, X-Prize
Ansari X Prize
The Ansari X Prize was a space competition in which the X Prize Foundation offered a US$10,000,000 prize for the first non-government organization to launch a reusable manned spacecraft into space twice within two weeks...
founder Peter Diamandis
Peter Diamandis
Dr. Peter H. Diamandis , of Greek immigrant parents, is considered a key figure in the development of the personal spaceflight industry, having created many space-related businesses or organizations...
, *NSYNC's Lance Bass
Lance Bass
James Lance Bass , best known as Lance Bass, is an American pop singer, dancer, actor, film and television producer, and author. He grew up in Mississippi and rose to fame as the bass singer for the American pop boy band 'N Sync. 'N Sync's success led Bass to work in film and television...
and Nichelle Nichols
Nichelle Nichols
Nichelle Nichols is an American actress, singer and voice artist. She sang with Duke Ellington and Lionel Hampton before turning to acting...
(Uhura
Uhura
Nyota Uhura is a character in Star Trek: The Original Series, Star Trek: The Animated Series, the first six Star Trek films, and the 2009 film Star Trek...
from the original Star Trek
Star Trek
Star Trek is an American science fiction entertainment franchise created by Gene Roddenberry. The core of Star Trek is its six television series: The Original Series, The Animated Series, The Next Generation, Deep Space Nine, Voyager, and Enterprise...
series). The event was followed by a large party with 2 dance floors and world-class DJs.

The 2007 event in the San Francisco Bay Area was located at NASA
NASA
The National Aeronautics and Space Administration is the agency of the United States government that is responsible for the nation's civilian space program and for aeronautics and aerospace research...
Ames Research Center at Moffett Field in Mountain View, CA. The event featured artistic installations, technology demonstrations, and DJ music continuing through dawn of the following day and takes place in an aircraft hangar not accessible to the public.