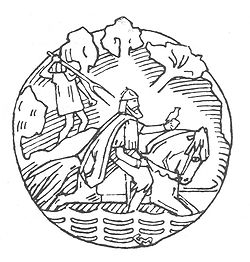 Ynglinga saga is a legendary saga
Legendary saga
A Legendary saga or Fornaldarsaga is a Norse saga that, unlike the Icelanders' sagas, takes place before the colonization of Iceland. There are some exceptions, such as Yngvars saga víðförla, which takes place in the 11th century...
, originally written in Old Norse
Old Norse
Old Norse is a North Germanic language that was spoken by inhabitants of Scandinavia and inhabitants of their overseas settlements during the Viking Age, until about 1300....
by the Icelandic
Icelanders
Icelanders are a Scandinavian ethnic group and a nation, native to Iceland.On 17 June 1944, when an Icelandic republic was founded the Icelanders became independent from the Danish monarchy. The language spoken is Icelandic, a North Germanic language, and Lutheranism is the predominant religion...
poet Snorri Sturluson
Snorri Sturluson
Snorri Sturluson was an Icelandic historian, poet, and politician. He was twice elected lawspeaker at the Icelandic parliament, the Althing...
about 1225. It was first translated into English and published in 1844.

Ynglinga saga is the first part of Snorri's history of the ancient Norse kings, the Heimskringla
Heimskringla
Heimskringla is the best known of the Old Norse kings' sagas. It was written in Old Norse in Iceland by the poet and historian Snorri Sturluson ca. 1230...
. Snorri's works covers the history of the Norwegian kings from the mythical prehistoric age until the year 1177, with the death of the pretender Eystein Meyla
Eystein Meyla
Eystein Meyla was elected a rival King of Norway during the Norwegian Civil War period.-Biography:Eystein was son of Eysteinn Haraldsson, King Eystein II of Norway. His nickname Møyla means maiden, girl, cute woman. His father was king of Norway from 1142 to 1157, ruling as co-ruler with his...
. Interwoven in this narrative are a number of references to important historical events.

The saga deals with the arrival of the Norse gods to Scandinavia and how Freyr
Freyr
Freyr is one of the most important gods of Norse paganism. Freyr was highly associated with farming, weather and, as a phallic fertility god, Freyr "bestows peace and pleasure on mortals"...
founded the Swedish Yngling dynasty at Uppsala
Uppsala
- Economy :Today Uppsala is well established in medical research and recognized for its leading position in biotechnology.*Abbott Medical Optics *GE Healthcare*Pfizer *Phadia, an offshoot of Pharmacia*Fresenius*Q-Med...
. Then the saga follows the line of Swedish kings until Ingjald
Ingjald
Ingjald illråde or Ingjaldr hinn illráði was a legendary Swedish king of the House of Ynglings. Ingjald may have ruled in the 7th century, and he was the son of the former king Anund....
(Ingjald illråde), after which the descendants settled in Norway
Norway
Norway , officially the Kingdom of Norway, is a Nordic unitary constitutional monarchy whose territory comprises the western portion of the Scandinavian Peninsula, Jan Mayen, and the Arctic archipelago of Svalbard and Bouvet Island. Norway has a total area of and a population of about 4.9 million...
and became the ancestors of the Norwegian King Harald Fairhair.