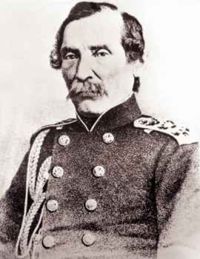 Yevfimy Vasilyevich Putyatin (November 8, 1803 – October 16, 1883) was a Russia
Russia
Russia or , officially known as both Russia and the Russian Federation , is a country in northern Eurasia. It is a federal semi-presidential republic, comprising 83 federal subjects...
n admiral noted for his diplomatic missions to Japan
Japan
Japan is an island nation in East Asia. Located in the Pacific Ocean, it lies to the east of the Sea of Japan, China, North Korea, South Korea and Russia, stretching from the Sea of Okhotsk in the north to the East China Sea and Taiwan in the south...
and China
China
Chinese civilization may refer to:* China for more general discussion of the country.* Chinese culture* Greater China, the transnational community of ethnic Chinese.* History of China* Sinosphere, the area historically affected by Chinese culture...
which resulted in the signing of the Treaty of Shimoda
Treaty of Shimoda
The Treaty of Shimoda of 1855, formally Treaty of Commerce and Navigation between Japan and Russia , was signed between the Russian Vice-Admiral Euphimy Vasil'evich Putiatin and Toshiakira Kawaji of Japan in the city of Shimoda, Izu Province, Japan, on February 7, 1855...
in 1855.

Yevfimy Putyatin was amongst the crew that sailed around the world with Mikhail Petrovich Lazarev
Mikhail Petrovich Lazarev
Admiral Mikhail Petrovich Lazarev was a Russian fleet commander and explorer who discovered Antarctica.-Education and early career:Lazarev was born in Vladimir, a scion of the old Russian nobility from the Vladimir province. In 1800, he enrolled in Russia's Naval College. Three years later he...
(1822–1825). and participated in the Caucasian War
Caucasian War
The Caucasian War of 1817–1864, also known as the Russian conquest of the Caucasus was an invasion of the Caucasus by the Russian Empire which ended with the annexation of the areas of the North Caucasus to Russia...
(1838–1839). In 1842 he led an armed diplomatic mission to Iran
Iran
Iran , officially the Islamic Republic of Iran , is a country in Southern and Western Asia. The name "Iran" has been in use natively since the Sassanian era and came into use internationally in 1935, before which the country was known to the Western world as Persia...
, which secured diplomatic relations, trade relations and steamer communication between the two countries.

He led a Russian expedition to open Japan to trade, which went to England
England
England is a country that is part of the United Kingdom. It shares land borders with Scotland to the north and Wales to the west; the Irish Sea is to the north west, the Celtic Sea to the south west, with the North Sea to the east and the English Channel to the south separating it from continental...
, Africa
Africa
Africa is the world's second largest and second most populous continent, after Asia. At about 30.2 million km² including adjacent islands, it covers 6% of the Earth's total surface area and 20.4% of the total land area...
and Japan
Japan
Japan is an island nation in East Asia. Located in the Pacific Ocean, it lies to the east of the Sea of Japan, China, North Korea, South Korea and Russia, stretching from the Sea of Okhotsk in the north to the East China Sea and Taiwan in the south...
and back to Russia from 1852 to 1855, onboard the frigate Pallada
Pallada
Pallada is the name of two ships of the Russian navy.-Frigate:Pallada was a frigate and the flagship of Admiral Yevfimy Putyatin during his visit to Japan in 1853. During the expedition, she was commanded by Admiral Ivan Unkovsky...
, commanded by Admiral Ivan Unkovsky
Admiral Ivan Unkovsky
Ivan Semyonovich Unkovsky , was an admiral, explorer and surveyor of the Imperial Russian Navy. After his navy years, Unkovsky formed opposition against Tsar Alexander II's legal system, and was exiled from Russia in 1861....
. These efforts culminated in the signing of a commercial treaty
Treaty of Shimoda
The Treaty of Shimoda of 1855, formally Treaty of Commerce and Navigation between Japan and Russia , was signed between the Russian Vice-Admiral Euphimy Vasil'evich Putiatin and Toshiakira Kawaji of Japan in the city of Shimoda, Izu Province, Japan, on February 7, 1855...
between Russia and Japan in 1855.

He arrived in Nagasaki on August 12, 1853, just one month after the first visit of Commodore Perry. Putyatin made a demonstration of a steam engine on his ship the Pallada, which led to Japan's first manufacture of a steam engine the same year under the direction of Hisashige Tanaka
Hisashige Tanaka
was a Japanese engineer and inventor during the late Edo and Meiji period Japan. He is one of the founders of what later became Toshiba Corporation. He has been called the "Thomas Edison of Japan" or Karakuri Giemon....
.

In his expedition, Putyatin was accompanied by Alexander Mozhaysky and a secretary, the writer Ivan Goncharov
Ivan Goncharov
Ivan Alexandrovich Goncharov was a Russian novelist best known as the author of Oblomov .- Biography :Ivan Goncharov was born in Simbirsk ; his father was a wealthy grain merchant and respected official who was elected mayor of Simbirsk several times...
, who wrote a travelogue, The Frigate Pallada (The Frigate Pallas), published in 1858 ("Pallada" is the Russian spelling of "Pallas
PALLAS
This article is about the research group. See Pallas for other uses of this word.PALLAS stands for Parallel Applications, Libraries, Languages, Algorithms, and Systems. It is a research group in of the at , led by...
").

He returned to Japan in October 1854 to continue the negotiations, landing at Shimoda
Shimoda, Shizuoka
is a city and port in Shizuoka, Japan.As of 2010, the city had an estimated population of 25,054 and a population density of 242 persons per square kilometer...
. Negotiations were under way when the Diana was hit by the tsunami
Tsunami
A tsunami is a series of water waves caused by the displacement of a large volume of a body of water, typically an ocean or a large lake...
associated with the 1854 Ansei-Tōkai earthquake
1854 Ansei-Tōkai earthquake
The 1854 Ansei-Tōkai earthquake was the first of the Ansei Great Earthquakes . It occurred at about 09:00 local time on 23 December, 1854. It had a magnitude of 8.4 and caused a damaging tsunami...
. Despite this the negotiations were successfully concluded on January 26, 1855 with the signing of the Shimoda Treaty
Treaty of Shimoda
The Treaty of Shimoda of 1855, formally Treaty of Commerce and Navigation between Japan and Russia , was signed between the Russian Vice-Admiral Euphimy Vasil'evich Putiatin and Toshiakira Kawaji of Japan in the city of Shimoda, Izu Province, Japan, on February 7, 1855...
. Putyatin's flagship Diana, which had been badly damaged, was on its way to Heda
Heda, Shizuoka
was a village located in Tagata District, Shizuoka, Japan on the Suruga Bay coast of Izu Peninsula. Stunning views of Mount Fuji can be seen from the village, which is a popular resort....
to carry out repairs, when it was sunk in a storm. Putyatin and the survivors continued to Heda where they began to construct a new ship, christened Heda, with the help of the local people. The Heda, a 25 m schooner
Schooner
A schooner is a type of sailing vessel characterized by the use of fore-and-aft sails on two or more masts with the forward mast being no taller than the rear masts....
, was launched on May 10, 1855 and carried Putyatin back to Russia, where he was made a count in recognition of his successful trip.

After the end of the Crimean War
Crimean War
The Crimean War was a conflict fought between the Russian Empire and an alliance of the French Empire, the British Empire, the Ottoman Empire, and the Kingdom of Sardinia. The war was part of a long-running contest between the major European powers for influence over territories of the declining...
, he was sent to London
London
London is the capital city of :England and the :United Kingdom, the largest metropolitan area in the United Kingdom, and the largest urban zone in the European Union by most measures. Located on the River Thames, London has been a major settlement for two millennia, its history going back to its...
as a naval attaché.

In February 1857 he was appointed plenipotentiary to China and set out from St Petersburg in March of that year, and had a role in the Amur Annexation
Amur Annexation
The Amur Annexation refers to the annexation of the southeast corner of Siberia by Russia from China in 1858–60. The two areas involved are the Priamurye between the Amur River and the Stanovoy Range to the north and the Primorye which runs down the coast from the Amur mouth to the Korean border...
.
The source of this article is wikipedia, the free encyclopedia.  The text of this article is licensed under the GFDL.