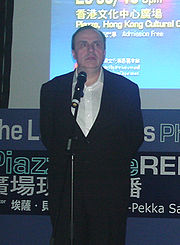 Yefim "Fima" Naumovich Bronfman is a Soviet
Soviet Union
The Soviet Union , officially the Union of Soviet Socialist Republics , was a constitutionally socialist state that existed in Eurasia between 1922 and 1991....
-born Israeli-American pianist.

He was born in Tashkent
Tashkent
Tashkent is the capital of Uzbekistan and of the Tashkent Province. The officially registered population of the city in 2008 was about 2.2 million. Unofficial sources estimate the actual population may be as much as 4.45 million.-Early Islamic History:...
, Uzbek SSR
Uzbek SSR
The Uzbek Soviet Socialist Republic , also known as the Uzbek SSR for short, was one of the republics of the Soviet Union since its creation in 1924...
, and emigrated to Israel at the age of 15. He became an American citizen in 1989.

He made his international debut in 1975 with Zubin Mehta
Zubin Mehta
Zubin Mehta is an Indian conductor of western classical music. He is the Music Director for Life of the Israel Philharmonic Orchestra.-Biography:...
and the Montreal Symphony Orchestra
Montreal Symphony Orchestra
Orchestre symphonique de Montréal is a symphony orchestra based in Montréal, Québec, Canada, with Montréal's Place des Arts as its home.-History:...
.

He made his Carnegie Hall
Carnegie Hall
Carnegie Hall is a concert venue in Midtown Manhattan in New York City, United States, located at 881 Seventh Avenue, occupying the east stretch of Seventh Avenue between West 56th Street and West 57th Street, two blocks south of Central Park....
debut in 1989 and gave a series of recitals with Isaac Stern
Isaac Stern
Isaac Stern was a Ukrainian-born violinist. He was renowned for his recordings and for discovering new musical talent.-Biography:Isaac Stern was born into a Jewish family in Kremenets, Ukraine. He was fourteen months old when his family moved to San Francisco...
in 1991. He won a Grammy award
Grammy Award
A Grammy Award — or Grammy — is an accolade by the National Academy of Recording Arts and Sciences of the United States to recognize outstanding achievement in the music industry...
in 1997 for his recording of the three Bartók
Béla Bartók
Béla Viktor János Bartók was a Hungarian composer and pianist. He is considered one of the most important composers of the 20th century and is regarded, along with Liszt, as Hungary's greatest composer...
piano concertos with Esa-Pekka Salonen
Esa-Pekka Salonen
Esa-Pekka Salonen is a Finnish orchestral conductor and composer. He is currently Principal Conductor and Artistic Advisor of the Philharmonia Orchestra in London and Conductor Laureate of the Los Angeles Philharmonic.-Early career:...
and the Los Angeles Philharmonic
Los Angeles Philharmonic
The Los Angeles Philharmonic is an American orchestra based in Los Angeles, California, United States. It has a regular season of concerts from October through June at the Walt Disney Concert Hall, and a summer season at the Hollywood Bowl from July through September...
. Another recording with Salonen, of the concertos of Sergei Rachmaninov, was pirated by the record label Concert Artist and re-issued with the piano part falsely attributed to Joyce Hatto
Joyce Hatto
Joyce Hatto was a British pianist and piano teacher. She became famous late in life, when unauthorised copies of commercial recordings made by other pianists were released under her name, earning her high praise from critics. The fraud did not come to light until a few months after her...
.

Bronfman is also devoted to chamber music and has performed with many chamber ensembles and instrumentalists.

In 1999, he appeared in Disney's Fantasia 2000, in a short clip introducing the "Steadfast Tin Soldier" segment. His rendition of Dmitri Shostakovich's Piano Concerto #2 in F-Major (1st movement) with the Chicago Symphony Orchestra is the music used for the segment.

Bronfman has also made an appearance with the Milwaukee Symphony Orchestra, performing Beethoven's "Emperor" Concerto.

His recent appearances have included performances with the Orchestre de Paris and the Singapore Symphony Orchestra
Singapore Symphony Orchestra
The Singapore Symphony Orchestra is a 96 members professional symphony orchestra. Its main performing venue is the Esplanade Concert Hall in Singapore although it has also toured widely in Asia, Europe and the United States...
. In January 2007, he also premiered Esa-Pekka Salonen's piano concerto, of which he is the dedicatee, with the New York Philharmonic
New York Philharmonic
The New York Philharmonic is a symphony orchestra based in New York City in the United States. It is one of the American orchestras commonly referred to as the "Big Five"...
conducted by the composer. This was later followed by a European premiere at the Proms with the BBC Symphony Orchestra
BBC Symphony Orchestra
The BBC Symphony Orchestra is the principal broadcast orchestra of the British Broadcasting Corporation and one of the leading orchestras in Britain.-History:...
. In May 2008, Bronfman performed the Brahms' Piano Concerto No. 1 with Michael Tilson Thomas
Michael Tilson Thomas
Michael Tilson Thomas is an American conductor, pianist and composer. He is currently music director of the San Francisco Symphony, and artistic director of the New World Symphony Orchestra.-Early years:...
and the San Francisco Symphony
San Francisco Symphony
The San Francisco Symphony is an orchestra based in San Francisco, California. Since 1980, the orchestra has performed at the Louise M. Davies Symphony Hall. The San Francisco Symphony Youth Orchestra and the San Francisco Symphony Chorus are part of the organization...
, during a three-week Brahms Festival. On Sept. 3, 2008, Bronfman performed Piano Concerto No. 3 in D minor by Sergei Rachmaninoff
Sergei Rachmaninoff
Sergei Vasilievich Rachmaninoff was a Russian composer, pianist, and conductor. Rachmaninoff is widely considered one of the finest pianists of his day and, as a composer, one of the last great representatives of Romanticism in Russian classical music...
under the direction of Michael Tilson Thomas at the Opening Gala of the San Francisco Symphony, and on Sept. 28 and 29 with the St. Louis Symphony Orchestra, under the direction of Dr. David Robertson. On March 25 and 26 2009, he performed Piano Concerto No. 3 in D minor by Sergei Rachmaninov, this time under the baton of Pinchas Zukerman
Pinchas Zukerman
Pinchas Zukerman is a world-renowned violinist, violist, and conductor. He is considered one of the greatest violinists of the 20th and 21st centuries, and his ongoing 45-year career has seen him perform with the world's best-known orchestras and record over 100 works...
with the National Arts Centre Orchestra
National Arts Centre Orchestra
The National Arts Centre Orchestra is an orchestra in Ottawa, Ontario, Canada's capital. It is a classically-sized ensemble currently conducted by Pinchas Zukerman.-Description:Since 1998, Pinchas Zukerman has been the Music Director. Mario Bernardi C.C...
in Ottawa
Ottawa
Ottawa is the capital of Canada, the second largest city in the Province of Ontario, and the fourth largest city in the country. The city is located on the south bank of the Ottawa River in the eastern portion of Southern Ontario...
, Canada
Canada
Canada is a North American country consisting of ten provinces and three territories. Located in the northern part of the continent, it extends from the Atlantic Ocean in the east to the Pacific Ocean in the west, and northward into the Arctic Ocean...
.

Bronfman's older sister, Elizabeth Krupnik is a violin player with the Israel Philharmonic Orchestra for the past 28 years.

In The Human Stain
The Human Stain
The Human Stain is a novel by Philip Roth. It is set in late 1990s rural New England. Its first person narrator is 65-year-old author Nathan Zuckerman, a character in previous Roth novels, including American Pastoral and I Married a Communist ; these two books form a loose trilogy with The Human...
by Philip Roth
Philip Roth
Philip Milton Roth is an American novelist. He gained fame with the 1959 novella Goodbye, Columbus, an irreverent and humorous portrait of Jewish-American life that earned him a National Book Award...
, the narrator attends a rehearsal at Tanglewood
Tanglewood
Tanglewood is an estate and music venue in Lenox and Stockbridge, Massachusetts. It is the home of the annual summer Tanglewood Music Festival and the Tanglewood Jazz Festival, and has been the Boston Symphony Orchestra's summer home since 1937. It was the venue of the Berkshire Festival.- History...
at which Bronfman performs. The following colorful description is offered (page 209-210):