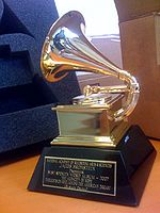 Overview
A Grammy Award — or Grammy — is an accolade by the National Academy of Recording Arts and Sciences
National Academy of Recording Arts and Sciences
The National Academy of Recording Arts & Sciences, Inc., known variously as The Recording Academy or NARAS, is a U.S. organization of musicians, producers, recording engineers and other recording professionals dedicated to improving the quality of life and cultural condition for music and its...
of the United States
United States
The United States of America is a federal constitutional republic comprising fifty states and a federal district...
to recognize outstanding achievement in the music industry. The annual awards ceremony features performances by prominent artists, and some of the awards of more popular interest are presented in a widely viewed televised ceremony. It is the music equivalent to the Emmy Awards for television, the Tony Award
Tony Award
The Antoinette Perry Award for Excellence in Theatre, more commonly known as a Tony Award, recognizes achievement in live Broadway theatre. The awards are presented by the American Theatre Wing and The Broadway League at an annual ceremony in New York City. The awards are given for Broadway...
for stage and the Academy Awards
Academy Awards
An Academy Award, also known as an Oscar, is an accolade bestowed by the American Academy of Motion Picture Arts and Sciences to recognize excellence of professionals in the film industry, including directors, actors, and writers...
for film.

The first Grammy Awards ceremony was held on May 4, 1959, to honor musical accomplishments by performers for the year 1958.

Can anyone identify the grammy winner pictured here? http://i51.tinypic.com/1z4wco1.jpg Someone's created a social networking account with his p...

Can I submit a single song to the Grammy's instead of a full lenght CD album? What are the requirements?