Encyclopedia
is a Japan
Japan
Japan is an island nation in East Asia. Located in the Pacific Ocean, it lies to the east of the Sea of Japan, China, North Korea, South Korea and Russia, stretching from the Sea of Okhotsk in the north to the East China Sea and Taiwan in the south...
ese diesel engine manufacturer with more than 90 years of history. The engines are used in a wide range of applications, including seagoing vessels, construction equipment, agricultural equipment and generator sets.

Yanmar is for the most part a corporation
Corporation
A corporation is created under the laws of a state as a separate legal entity that has privileges and liabilities that are distinct from those of its members. There are many different forms of corporations, most of which are used to conduct business. Early corporations were established by charter...
specializing in diesel engine
Diesel engine
A diesel engine is an internal combustion engine that uses the heat of compression to initiate ignition to burn the fuel, which is injected into the combustion chamber...
s, and also makes light fishing boats, hull
Hull (watercraft)
A hull is the watertight body of a ship or boat. Above the hull is the superstructure and/or deckhouse, where present. The line where the hull meets the water surface is called the waterline.The structure of the hull varies depending on the vessel type...
s for ships, tractor
Tractor
A tractor is a vehicle specifically designed to deliver a high tractive effort at slow speeds, for the purposes of hauling a trailer or machinery used in agriculture or construction...
s, combine harvester
Combine harvester
The combine harvester, or simply combine, is a machine that harvests grain crops. The name derives from the fact that it combines three separate operations, reaping, threshing, and winnowing, into a single process. Among the crops harvested with a combine are wheat, oats, rye, barley, corn ,...
s, rice
Rice
Rice is the seed of the monocot plants Oryza sativa or Oryza glaberrima . As a cereal grain, it is the most important staple food for a large part of the world's human population, especially in East Asia, Southeast Asia, South Asia, the Middle East, and the West Indies...
-planting machines, snow throwers, transporters, tillers, mini excavators, portable diesel generators and Heavy Utility Machinery. Yanmar is one of the most famous among the top brands of agricultural, marine machinery in Japan and the world.

Yanmar was the first to put a diesel engine in a rice planting machine with a passenger seat. Small, light, air-cooled diesel engines are Yanmar's speciality. Yanmar also supplies engines to John Deere tractors and Thermo King Corporation
Thermo King Corporation
Thermo King Corporation, based in Bloomington, Minnesota and a unit of Ingersoll Rand Company Limited, is a manufacturer of transport temperature control systems for trucks, trailers, shipboard containers and railway cars as well as HVAC systems for bus, shuttle and passenger rail applications...
used in refrigerated trucks and trailers
Refrigerator truck
A refrigerator truck is a van or truck designed to carry perishable freight at specific temperatures. Like refrigerator cars, refrigerated trucks differ from simple insulated and ventilated vans , neither of which are fitted with cooling apparatus...
.

Yanmar's headquarters are at 1-32, Chayamachi, Kita-ku
Kita-ku, Osaka
is one of 24 wards of Osaka, Japan.-Economy:West Japan Railway Company has its headquarters in Kita-ku. Nihon Bussan has its headquarters in Kita-ku. Dentsu and Yomiuri Shimbun have branch offices in Kita-ku. Mazda has an office in the Umeda Sky Building Tower East. Air France has an office on the...
, Osaka
Osaka
is a city in the Kansai region of Japan's main island of Honshu, a designated city under the Local Autonomy Law, the capital city of Osaka Prefecture and also the biggest part of Keihanshin area, which is represented by three major cities of Japan, Kyoto, Osaka and Kobe...
, Japan
Japan
Japan is an island nation in East Asia. Located in the Pacific Ocean, it lies to the east of the Sea of Japan, China, North Korea, South Korea and Russia, stretching from the Sea of Okhotsk in the north to the East China Sea and Taiwan in the south...
.

Yanmar is the patron of the J. League Division 1 soccer team Cerezo Osaka
Cerezo Osaka
is a J. League Division 1 association football team. The team name Cerezo means cherry tree in Spanish, which is also the flower of Ōsaka city....
and sponsor for AFC Champions League
AFC Champions League
The AFC Champions League is the premier Asian club football competition hosted annually by Asian Football Confederation . The tournament is contested among the top thirty-two clubs from the top 10 Asian leagues, two of which must qualify through the playoffs...
, Yanmar Racing and several weather forecast programmes on Japanese television
Television
Television is a telecommunication medium for transmitting and receiving moving images that can be monochrome or colored, with accompanying sound...
. 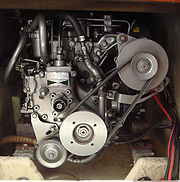