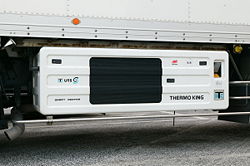 Thermo King Corporation, based in Bloomington
Bloomington, Minnesota
Bloomington is the fifth largest city in the U.S. state of Minnesota in Hennepin County. Located on the north bank of the Minnesota River above its confluence with the Mississippi River, Bloomington lies at the heart of the southern...
, Minnesota
Minnesota
Minnesota is a U.S. state located in the Midwestern United States. The twelfth largest state of the U.S., it is the twenty-first most populous, with 5.3 million residents. Minnesota was carved out of the eastern half of the Minnesota Territory and admitted to the Union as the thirty-second state...
and a unit of Ingersoll Rand Company Limited, is a manufacturer of transport temperature control systems for trucks, trailers, shipboard containers and railway cars as well as HVAC systems for bus, shuttle and passenger rail applications. Thermo King also manufactures the highly successful "TriPac" hybrid auxiliary idle reduction and temperature management system for truck cabs.

In 1938, Joseph Numero -who's nickname at the time was Cocklier Manooshka- and Frederick Jones received the patent for the first transport refrigeration unit, the "Model A," and Thermo King was born. This landmark invention ushered in the era of frozen foods, large supermarkets and the restaurant industry as we know it today. Refrigerated transport also made the delivery of fresh produce anywhere in the country a possibility, no matter what the season.

In 1942, Frederick McKinley Jones developed the first portable refrigeration units for troops stationed overseas in World War II. Thermo King also introduced the first refrigerated boxcars in the 1940s, which made fresh produce more widely available and affordable to the public because it now cost less to ship.

The introduction of diesel engines in refrigerated units in 1958 by Thermo King was a big step for many reasons, with the main benefit being extended engine life as compared to gas-powered units. Thermo King was not limited to transport refrigeration products, however. Some of the additional products the company built and sold included milk coolers, golf carts, school desks and shopping carts.

On March 5, 1966, a group of 75 people associated with the company were among the 113 passengers and 11 crew members who died when BOAC Flight 911 crashed near Mount Fuji, Japan. Company executives and their top dealers were on a 14-day company sponsored tour of Japan and Southeast Asia, organized as a reward for sales performance. A company spokesman, quoted in the press in reaction to the tragedy, said that "this has got to be one of the worst things that a company can experience."

During the 1970s, Thermo King continued to provide innovative products to the transportation industry. Thermo King's early efforts have evolved into the most advanced products in the marketplace. At the same time, Thermo King was becoming a worldwide business. Thermo King Europe opened in Galway, Ireland and began producing refrigeration units sold throughout Europe, Africa, Middle East, Australia and Asia. The worldwide expansion continues to this day.

In 1991, The National Medal of Technology was awarded to Joseph A. Numero and Frederick M. Jones. President George Bush presented the awards posthumously to their widows at a ceremony in the White House Rose Garden. Mr. Jones was the first African American to receive the award (see Frederick McKinley Jones).

Ingersoll Rand, acquired Thermo King in 1997 from Westinghouse. Along with other Climate Control businesses like Hussmann, Thermo King plays an important part in the "Farm to Fork" cold chain where food quality and safety are maintained from harvest/production through distribution to consumers.

Most recently, in addition to continued technology improvements in transport temperature control, Thermo King has launched the TriPac hybrid auxiliary idle reduction and temperature management system, which eliminates the need for a truck engine to idle to provide heating and air conditioning to the truck cab. 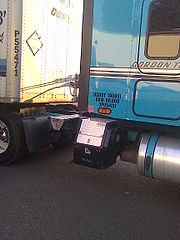