Encyclopedia
Xu Guangqi was a Chinese scholar-bureaucrat, agricultural scientist, astronomer, and mathematician in the Ming Dynasty
Ming Dynasty
The Ming Dynasty, also Empire of the Great Ming, was the ruling dynasty of China from 1368 to 1644, following the collapse of the Mongol-led Yuan Dynasty. The Ming, "one of the greatest eras of orderly government and social stability in human history", was the last dynasty in China ruled by ethnic...
. Xu was a colleague and collaborator of the Italian Jesuits Matteo Ricci
Matteo Ricci
Matteo Ricci, SJ was an Italian Jesuit priest, and one of the founding figures of the Jesuit China Mission, as it existed in the 17th-18th centuries. His current title is Servant of God....
and Sabatino de Ursis
Sabatino de Ursis
Sabatino de Ursis was an Italian Jesuit who was active in 17th-century China, during the Jesuit China missions.-Career:...
and they translated several classic Western texts into Chinese
Chinese language
The Chinese language is a language or language family consisting of varieties which are mutually intelligible to varying degrees. Originally the indigenous languages spoken by the Han Chinese in China, it forms one of the branches of Sino-Tibetan family of languages...
, including part of Euclid
Euclid
Euclid , fl. 300 BC, also known as Euclid of Alexandria, was a Greek mathematician, often referred to as the "Father of Geometry". He was active in Alexandria during the reign of Ptolemy I...
's Elements
Euclid's Elements
Euclid's Elements is a mathematical and geometric treatise consisting of 13 books written by the Greek mathematician Euclid in Alexandria c. 300 BC. It is a collection of definitions, postulates , propositions , and mathematical proofs of the propositions...
. He was also the author of the Nong Zheng Quan Shu, one of the first comprehensive treatises on the subject of agriculture. He was one of the "Three Pillars of Chinese Catholicism
Three Pillars of Chinese Catholicism
Xǔ Guāngqǐ of Shanghai, and Lǐ Zhīzǎo and Yáng Tíngyún both of Hangzhou, are known as the Three Great Pillars of Chinese Catholicism . It is due to their combined efforts that Hangzhou and Shanghai became the centre of missionary activity in late Ming China...
".

Xu Guangqi was born into a relatively poor family in Shanghai
Shanghai
Shanghai is the largest city by population in China and the largest city proper in the world. It is one of the four province-level municipalities in the People's Republic of China, with a total population of over 23 million as of 2010...
on April 24, 1562. His father, Xu Sicheng, was in difficult financial situation when Guangqi was a child, and had to support the family with a small vegetable farm, but apparently still earned enough to be able to send his son to school at the age of six. Xu received the equivalent of his bachelor's degree at nineteen, but did not receive higher degrees until his thirties. Afterwards, he spent the majority of his time in positions of high office serving the Ming court. He lived in a period when Chinese mathematics
Chinese mathematics
Mathematics in China emerged independently by the 11th century BC. The Chinese independently developed very large and negative numbers, decimals, a place value decimal system, a binary system, algebra, geometry, and trigonometry....
had gone into decline. The earlier efforts at algebra had been almost forgotten. Xu blamed some of the failures on a decline in interest of practical science in China and became something of a critic of Chinese society. 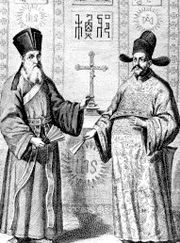 He was a colleague and collaborator of Matteo Ricci
Matteo Ricci
Matteo Ricci, SJ was an Italian Jesuit priest, and one of the founding figures of the Jesuit China Mission, as it existed in the 17th-18th centuries. His current title is Servant of God....
, the Italian
Italy
Italy , officially the Italian Republic languages]] under the European Charter for Regional or Minority Languages. In each of these, Italy's official name is as follows:;;;;;;;;), is a unitary parliamentary republic in South-Central Europe. To the north it borders France, Switzerland, Austria and...
Jesuit. Together they translated several classic Western texts (most notably part of Euclid
Euclid
Euclid , fl. 300 BC, also known as Euclid of Alexandria, was a Greek mathematician, often referred to as the "Father of Geometry". He was active in Alexandria during the reign of Ptolemy I...
's Elements
Euclid's Elements
Euclid's Elements is a mathematical and geometric treatise consisting of 13 books written by the Greek mathematician Euclid in Alexandria c. 300 BC. It is a collection of definitions, postulates , propositions , and mathematical proofs of the propositions...
) into Chinese
Chinese language
The Chinese language is a language or language family consisting of varieties which are mutually intelligible to varying degrees. Originally the indigenous languages spoken by the Han Chinese in China, it forms one of the branches of Sino-Tibetan family of languages...
, as well as several Chinese Confucian
Confucianism
Confucianism is a Chinese ethical and philosophical system developed from the teachings of the Chinese philosopher Confucius . Confucianism originated as an "ethical-sociopolitical teaching" during the Spring and Autumn Period, but later developed metaphysical and cosmological elements in the Han...
texts into Latin. Ricci's influence led to Xu being baptized as a Roman Catholic in 1603, under the name "Paul Xu Guangqi". His descendants remained as Catholics and Christians into the 21st century.

From 1607 until 1610, Xu was forced to retire from public office, and returned to his home in Shanghai. It was during this time that he experimented with Western-style irrigation methods. He also experimented with the cultivation of sweet potatoes, cotton
Cotton
Cotton is a soft, fluffy staple fiber that grows in a boll, or protective capsule, around the seeds of cotton plants of the genus Gossypium. The fiber is almost pure cellulose. The botanical purpose of cotton fiber is to aid in seed dispersal....
, and the nu zhen
Ligustrum lucidum
Ligustrum lucidum is a species of privet native to the southern half of China.-Growth:It is the largest species in the genus, growing as a tree up to 25 m tall...
tree. He was called once more to serve the Chinese bureaucracy, where he rose to a high rank and became known late in his career simply as "The Minister". Yet he continued to experiment and learn of new agricultural practices while he served his office, promoting the use of wet-rice in the Northeast of China. From 1613 until 1620 he often visited Tianjin
Tianjin
' is a metropolis in northern China and one of the five national central cities of the People's Republic of China. It is governed as a direct-controlled municipality, one of four such designations, and is, thus, under direct administration of the central government...
, where he helped organize self-sufficient military settlements (tun tian).

Xu Guangqi's tomb still exists in Shanghai
Shanghai
Shanghai is the largest city by population in China and the largest city proper in the world. It is one of the four province-level municipalities in the People's Republic of China, with a total population of over 23 million as of 2010...
in Guangqi Park just a short walk from the Xujiahui Cathedral in the Xujiahui
Xujiahui
Xujiahui , also spelt Zikawei or Siccawei is an historical and cultural area in Xuhui District of Shanghai, China. The area is a well known precinct for shopping and entertainment in Shanghai....
area on Nandan Road (南丹路).

Xu Guangxi was especially worried about the ability of his country to defend itself, especially in the face of the threat of invasion from the Manchus. He wrote a book on military techniques and strategies entitled Cook Xu's Words in response to the criticisms he faced for daring discuss military matters in spite of being a mere scolar.

Xu Guangqi put forward the concept of a "Rich country and strong army" (富国強兵), which would be adopted by Japan for its modernization in the end of the 19th century, under the name Fukoku Kyohei
Fukoku kyohei
, originally a phrase from the ancient Chinese historical work on the Warring States Period, Zhan Guo Ce , was Japan's national slogan during the Meiji Era, replacing sonnō jōi ....
.

After followers of Xu and Ricci publicly predicted a solar eclipse
Solar eclipse
As seen from the Earth, a solar eclipse occurs when the Moon passes between the Sun and the Earth, and the Moon fully or partially blocks the Sun as viewed from a location on Earth. This can happen only during a new moon, when the Sun and the Moon are in conjunction as seen from Earth. At least...
in 1629, Xu was appointed by the Emperor
Emperor of China
The Emperor of China refers to any sovereign of Imperial China reigning between the founding of Qin Dynasty of China, united by the King of Qin in 221 BCE, and the fall of Yuan Shikai's Empire of China in 1916. When referred to as the Son of Heaven , a title that predates the Qin unification, the...
as the leader of an effort to reform the Chinese calendar
Chinese calendar
The Chinese calendar is a lunisolar calendar, incorporating elements of a lunar calendar with those of a solar calendar. It is not exclusive to China, but followed by many other Asian cultures as well...
. The reform, which constituted the first major collaboration between scientists from Europe and from the Far East, was completed after his death.

Xu Guangqi wrote the Nong Zheng Quan Shu, an outstanding agricultural treatise that followed in the tradition of those such as Wang Zhen
Wang Zhen (official)
Wang Zhen was an official of the Yuan Dynasty of China. He is credited with the invention of the first wooden movable type printing in the world, while his predecessor of the Song Dynasty , Bi Sheng , invented the world's first earthenware movable type printing...
(wrote the Wang Zhen Nong Shu of 1313 AD) and Jia Sixia (wrote the Chi Min Yao Shu of 535 AD). Like Wang Zhen, Xu lived in troubled times, and was devoted as a patriot to aiding the rural farmers of China. His main interests were in irrigation
Irrigation
Irrigation may be defined as the science of artificial application of water to the land or soil. It is used to assist in the growing of agricultural crops, maintenance of landscapes, and revegetation of disturbed soils in dry areas and during periods of inadequate rainfall...
, fertilizers, famine
Famine
A famine is a widespread scarcity of food, caused by several factors including crop failure, overpopulation, or government policies. This phenomenon is usually accompanied or followed by regional malnutrition, starvation, epidemic, and increased mortality. Every continent in the world has...
relief, economic crops, and empirical observation with early notions of chemistry
Chemistry
Chemistry is the science of matter, especially its chemical reactions, but also its composition, structure and properties. Chemistry is concerned with atoms and their interactions with other atoms, and particularly with the properties of chemical bonds....
. It was an enormous written work, some 700,000 written Chinese characters, making it 7 times as large as the work of both Jia Sixia and Wang Zhen. Although its final draft was unfinished by Xu Guangqi by the time of his death in 1633, the famous Jiangnan scholar Chen Zilung assembled a group of scholars to edit the draft, publishing it in 1639.
The topics covered by his book are as follows: 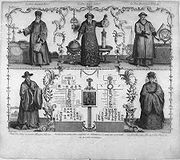 Xu Guangqi's granddaughter, Candida Xu (1607-1680), a devout Christian, was recognized as an important patron of Christianity in Jiangnan
Jiangnan
Jiangnan or Jiang Nan is a geographic area in China referring to lands immediately to the south of the lower reaches of the Yangtze River, including the southern part of the Yangtze Delta...
during the early Qing
Qing Dynasty
The Qing Dynasty was the last dynasty of China, ruling from 1644 to 1912 with a brief, abortive restoration in 1917. It was preceded by the Ming Dynasty and followed by the Republic of China....
era. The Jesuit Philippe Couplet
Philippe Couplet
Philippe Couplet, also Philip Couplet or Philippus Couplet , was a Belgian Jesuit Father who was active in China in the 17th century. He was born in Mechelen, Spanish Netherlands ....
, who worked closely with her, authored her biography, which was originally written in Latin, and published in a French translations as Histoire d'une dame chrétienne de la Chine, Candide Hiu (1688).