Encyclopedia
Xishuangbanna is an autonomous prefecture
Autonomous prefectures of China
Autonomous prefectures are one type of Autonomous areas of China, existing at the prefectural level. Autonomous prefectures either have over 50% of the population with ethnic minorities or are historically resided by significant minorities. All autonomous prefectures are mostly dominated, in...
in Yunnan Province, China
People's Republic of China
China , officially the People's Republic of China , is the most populous country in the world, with over 1.3 billion citizens. Located in East Asia, the country covers approximately 9.6 million square kilometres...
. The capital city is Jinghong
Jinghong
Jinghong romanised as chiang rung, chiang hung, chengrung, cheng hung, jinghung, keng hung and muangjinghung) is the capital of Xishuangbanna Dai Autonomous Prefecture, Yunnan province, China, and the historic capital of the former Tai kingdom of Sipsongpanna.-Location:Located between 100°25' -...
, the largest settlement in the area and one that straddles the Mekong River
Mekong
The Mekong is a river that runs through China, Burma, Laos, Thailand, Cambodia and Vietnam. It is the world's 10th-longest river and the 7th-longest in Asia. Its estimated length is , and it drains an area of , discharging of water annually....
, called the Lancang River in Chinese.

The prefecture has an area of 19,700 km². Xishuangbanna is the home of the Dai people
Dai people
The Dai peoples is one of several ethnic groups living in the Xishuangbanna Dai Autonomous Prefecture and the Dehong Dai and Jingpo Autonomous Prefecture , but by extension can apply to groups in Laos, Vietnam, Thailand, and Burma when Dai is used to mean specifically Tai Lue, Chinese Shan or even...
. The region sits at a lower altitude than most of Yunnan, and has a tropical climate
Tropical climate
A tropical climate is a climate of the tropics. In the Köppen climate classification it is a non-arid climate in which all twelve months have mean temperatures above...
. It is fast becoming a sought after tourist destination.

Xishuangbanna harbors much of the biodiversity
Biodiversity
Biodiversity is the degree of variation of life forms within a given ecosystem, biome, or an entire planet. Biodiversity is a measure of the health of ecosystems. Biodiversity is in part a function of climate. In terrestrial habitats, tropical regions are typically rich whereas polar regions...
of Yunnan Province, which harbors much of the biodiversity of China. Its tropical climate and its remoteness until recent times accounts for this. In addition to an abundance of plants, Xishuangbanna is home to the last few Asian elephant
Asian Elephant
The Asian or Asiatic elephant is the only living species of the genus Elephas and distributed in Southeast Asia from India in the west to Borneo in the east. Three subspecies are recognized — Elephas maximus maximus from Sri Lanka, the Indian elephant or E. m. indicus from mainland Asia, and E. m....
s still in China; the species roamed over a large part of the country even as late as a few hundred years ago. The elephants are protected in a reserve, but the plant diversity is threatened by, and has for five decades been threatened by, the proliferation of rubber
Rubber
Natural rubber, also called India rubber or caoutchouc, is an elastomer that was originally derived from latex, a milky colloid produced by some plants. The plants would be ‘tapped’, that is, an incision made into the bark of the tree and the sticky, milk colored latex sap collected and refined...
plantation
Plantation
A plantation is a long artificially established forest, farm or estate, where crops are grown for sale, often in distant markets rather than for local on-site consumption...
s which completely destroy the rainforest
Rainforest
Rainforests are forests characterized by high rainfall, with definitions based on a minimum normal annual rainfall of 1750-2000 mm...
and replace it with a monoculture
Monoculture
Monoculture is the agricultural practice of producing or growing one single crop over a wide area. It is also known as a way of farming practice of growing large stands of a single species. It is widely used in modern industrial agriculture and its implementation has allowed for large harvests from...
of trees originally from Brazil
Brazil
Brazil , officially the Federative Republic of Brazil , is the largest country in South America. It is the world's fifth largest country, both by geographical area and by population with over 192 million people...
.

With censuses in the year 2000 Xishuangbanna had 993,397 inhabitants with a population density of 50.43 inhabitants per km².

In the early 1950s, the Han
Han Chinese
Han Chinese are an ethnic group native to China and are the largest single ethnic group in the world.Han Chinese constitute about 92% of the population of the People's Republic of China , 98% of the population of the Republic of China , 78% of the population of Singapore, and about 20% of the...
population of Sipsongpanna was less than 10% of the total; today the Han population may soon overtake the local Dai people
Dai people
The Dai peoples is one of several ethnic groups living in the Xishuangbanna Dai Autonomous Prefecture and the Dehong Dai and Jingpo Autonomous Prefecture , but by extension can apply to groups in Laos, Vietnam, Thailand, and Burma when Dai is used to mean specifically Tai Lue, Chinese Shan or even...
. Most of the businesses had been bought by the Han, and commercial signs, which were earlier Tai/Chinese bilingual, are now almost solely in Chinese. However, the Dai villagers have also prospered as landlords, often renting out their livestock quarters to Han migrants as the area undergoes rapid urbanization. 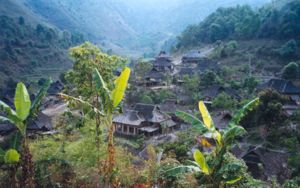 The Six famous tea mountains region (六大茶山; pinyin
Pinyin
Pinyin is the official system to transcribe Chinese characters into the Roman alphabet in China, Malaysia, Singapore and Taiwan. It is also often used to teach Mandarin Chinese and spell Chinese names in foreign publications and used as an input method to enter Chinese characters into...
: Liù Dà Chá Shān; literally, "Six major tea mountain") located in the prefecture produce some of the most highly regarded Pu-erh tea
Pu-erh tea
Pu'er, Pu-erh, Puer, also Po Lei or Bolay is a variety of post-fermented tea produced in Yunnan province, China. Post-fermentation is a tea production style in which the tea leaves undergo a microbial fermentation process after they are dried and rolled. This is a Chinese specialty and is sometimes...
in the 20th century.

The well-known traditional festival is the ethnic Dai's Water-Splashing Festival. It lasts for three days from April 13 to 15. Besides the water festival event it also consists of some other events such as Dragon boat
Dragon boat
A dragon boat is a human-powered watercraft traditionally made, in the Pearl River delta region of southern China - Guangdong Province, of teak wood to various designs and sizes. In other parts of China different woods are used to build these traditional watercraft...
races, firing of indigenous missiles, flying Kongming Lamps.

Since the opening of the Xishuangbanna Gasa Airport
Xishuangbanna Gasa Airport
Xishuangbanna Gasa International Airport is an airport in Jinghong, Xishuangbanna Dai Autonomous Prefecture, Yunnan, China . Due its location in Jinghong, it is also known as Jinghong International Airport -Airlines and destinations:...
(formerly "Jinghong International Airport") in 1990, traveling to Xishuangbanna by air has become more popular and convenient and there are daily flights connecting Xishuangbanna with Kunming City. The area also has air connections with Dali
Dali Bai Autonomous Prefecture
Dali Bai Autonomous Prefecture is an autonomous prefecture of Yunnan Province, China. Dali has an area of 29,460 km² and its capital is Xiaguan.-Subdivisions:...
, Chengdu
Chengdu
Chengdu , formerly transliterated Chengtu, is the capital of Sichuan province in Southwest China. It holds sub-provincial administrative status...
and Bangkok
Bangkok
Bangkok is the capital and largest urban area city in Thailand. It is known in Thai as Krung Thep Maha Nakhon or simply Krung Thep , meaning "city of angels." The full name of Bangkok is Krung Thep Mahanakhon Amon Rattanakosin Mahintharayutthaya Mahadilok Phop Noppharat Ratchathani Burirom...
. The Xishuangbanna Airport is 6 km south of Jinghong City.

There are also bus routes to places all over Yunnan
Yunnan
Yunnan is a province of the People's Republic of China, located in the far southwest of the country spanning approximately and with a population of 45.7 million . The capital of the province is Kunming. The province borders Burma, Laos, and Vietnam.Yunnan is situated in a mountainous area, with...
and neighboring provinces.

In October 2010, plans were announced for a 530 km railway linking Xishuangbanna to Vientiane
Vientiane
-Geography:Vientiane is situated on a bend of the Mekong river, which forms the border with Thailand at this point.-Climate:Vientiane features a tropical wet and dry climate with a distinct monsoon season and a dry season. Vientiane’s dry season spans from November through March. April marks the...
in Laos
Laos
Laos Lao: ສາທາລະນະລັດ ປະຊາທິປະໄຕ ປະຊາຊົນລາວ Sathalanalat Paxathipatai Paxaxon Lao, officially the Lao People's Democratic Republic, is a landlocked country in Southeast Asia, bordered by Burma and China to the northwest, Vietnam to the east, Cambodia to the south and Thailand to the west...
; connections to Thailand
State Railway of Thailand
The State Railway of Thailand is the state-owned rail operator in Thailand. The network sees around 50 million passengers per annum.-History:SRT was founded as the Royal State Railways of Siam in 1890...
are also possible.