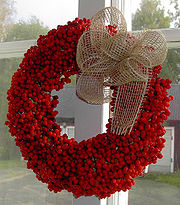 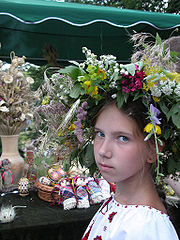 A wreath is an assortment of flower
Flower
A flower, sometimes known as a bloom or blossom, is the reproductive structure found in flowering plants . The biological function of a flower is to effect reproduction, usually by providing a mechanism for the union of sperm with eggs...
s, leaves
Leaf
A leaf is an organ of a vascular plant, as defined in botanical terms, and in particular in plant morphology. Foliage is a mass noun that refers to leaves as a feature of plants....
, fruit
Fruit
In broad terms, a fruit is a structure of a plant that contains its seeds.The term has different meanings dependent on context. In non-technical usage, such as food preparation, fruit normally means the fleshy seed-associated structures of certain plants that are sweet and edible in the raw state,...
s, twig
Twig
A twig is a small thin terminal branch of a woody plant. Twigs are critically important in identification of trees, shrubs and vines, especially in wintertime. The buds on the twig are an important diagnostic characteristic, as are the abscission scars where the leaves have fallen away...
s and/or various materials that is constructed to resemble a ring. They are used typically as Christmas decoration
Christmas decoration
A Christmas decoration is any of several types of decorations used at Christmastime. The traditional colours of Christmas are pine green , snow white, and heart red. Blue and white are often used to represent winter, or sometimes Hanukkah, which occurs around the same time. Gold and silver are...
s to symbolize the coming of Christ, also known as the Advent season
Advent
Advent is a season observed in many Western Christian churches, a time of expectant waiting and preparation for the celebration of the Nativity of Jesus at Christmas. It is the beginning of the Western liturgical year and commences on Advent Sunday, called Levavi...
in Christianity
Christianity
Christianity is a monotheistic religion based on the life and teachings of Jesus as presented in canonical gospels and other New Testament writings...
. They are also used as festive headdresses as attire in ceremonial events in many cultures around the globe. Wreaths have much history and symbolism associated with them. They are usually made from evergreen
Evergreen
In botany, an evergreen plant is a plant that has leaves in all seasons. This contrasts with deciduous plants, which completely lose their foliage during the winter or dry season.There are many different kinds of evergreen plants, both trees and shrubs...
s and symbolize strength, as evergreens last even throughout the harshest winters. Bay laurel
Bay Laurel
The bay laurel , also known as sweet bay, bay tree, true laurel, Grecian laurel, laurel tree, or simply laurel, is an aromatic evergreen tree or large shrub with green, glossy leaves, native to the Mediterranean region. It is the source of the bay leaf used in cooking...
may also be used, and these wreaths are known as laurel wreath.

Wreaths are also a traditional form of floral tribute at funeral
Funeral
A funeral is a ceremony for celebrating, sanctifying, or remembering the life of a person who has died. Funerary customs comprise the complex of beliefs and practices used by a culture to remember the dead, from interment itself, to various monuments, prayers, and rituals undertaken in their honor...
s.

The use of wreaths varies by culture, tradition and religions. In Christianity
Christianity
Christianity is a monotheistic religion based on the life and teachings of Jesus as presented in canonical gospels and other New Testament writings...
, it is used to prepare for Jesus’ birth and in many cultures around the world, wreaths are used in weddings as a headdress. The history behind wreaths dates back thousands of years and much of the symbolism lies with Greek mythology
Greek mythology
Greek mythology is the body of myths and legends belonging to the ancient Greeks, concerning their gods and heroes, the nature of the world, and the origins and significance of their own cult and ritual practices. They were a part of religion in ancient Greece...
, Roman tradition with the present day usage being focused on Advent
Advent
Advent is a season observed in many Western Christian churches, a time of expectant waiting and preparation for the celebration of the Nativity of Jesus at Christmas. It is the beginning of the Western liturgical year and commences on Advent Sunday, called Levavi...
and for festive décor.

In the Greco-Roman world
Greco-Roman world
The Greco-Roman world, Greco-Roman culture, or the term Greco-Roman , when used as an adjective, as understood by modern scholars and writers, refers to those geographical regions and countries that culturally were directly, protractedly and intimately influenced by the language, culture,...
, wreaths were used as an adornment that could represent a person’s occupation, rank, their achievements and status. The wreath that was commonly used was the laurel wreath. The use of this wreath arose from the Greek myth
Greek mythology
Greek mythology is the body of myths and legends belonging to the ancient Greeks, concerning their gods and heroes, the nature of the world, and the origins and significance of their own cult and ritual practices. They were a part of religion in ancient Greece...
involving Apollo
Apollo
Apollo is one of the most important and complex of the Olympian deities in Greek and Roman mythology...
, Zeus’ son and the god of life and light, who fell in love with the nymph Daphne
Daphne
Daphne was a female minor nature deity. Pursued by Apollo, she fled and was chased. Daphne begged the gods for help, who then transformed her into Laurel.-Overview:...
. When he pursued her she fled and asked the river god Peneus
Peneus
In Greek mythology, Peneus was a Thessalian river god, one of the three thousand Rivers , a child of Oceanus and Tethys. The nymph Creusa bore him one son, Hypseus, who was King of the Lapiths, and three daughters, Menippe , Daphne, and Stilbe. He also had a son Atrax with Bura, and Andreus with...
to help her, in which Peneus turned her into a laurel tree. From that day forth, Apollo wore a wreath of laurel on his head. This became associated with what Apollo embodied; victory, achievement and status and would later become one of the most commonly used symbols to address achievement throughout Greece and Rome.

The laurel wreath was also used to crown victors at the Pythian games dating back to the 6th century BCE and was later used in the Ancient Olympic Games as well. In present day society, the use of the laurel wreath is still honoured as to follow tradition. Modern Olympic
Olympic Games
The Olympic Games is a major international event featuring summer and winter sports, in which thousands of athletes participate in a variety of competitions. The Olympic Games have come to be regarded as the world’s foremost sports competition where more than 200 nations participate...
medals are designed with a sprig of laurel engraved to pay homage to the first Olympic games. A more recent example is the coins minted for the 2004 games that were held in Athens, Greece. They featured an olive wreath
Olive wreath
The olive wreath also known as kotinos , was the prize for the winner at the ancient Olympic Games. It was an olive branch, of the wild- olive tree that grew at Olympia, intertwined to form a circle or a horse-shoe. According to Pausanias it was introduced by Heracles as a prize for the running...
on them, as well as the victors were crowned with an actual laurel wreath.

The Romans use of laurel wreaths echo the Greek traditions. The wreath was a symbol in the arts, literature, government and education in Roman society. In the arts, it expressed that one was valued and respected with a laurel wreath resting atop one’s head. Ovid
Ovid
Publius Ovidius Naso , known as Ovid in the English-speaking world, was a Roman poet who is best known as the author of the three major collections of erotic poetry: Heroides, Amores, and Ars Amatoria...
, the famous Roman poet, is almost always depicted with laurel in his hair. Kings in both Greece and Rome donned the laurel wreath to illustrate sovereignty. Julius Caesar for example, proclaimed the laurel wreath "to be a symbol of the supreme ruler." The wreaths worn by kings were reminiscent of the traditional laurel wreath by the shape and its connotation yet were embellished with gold and gems. This eventually led to the modern day crown.

Since the classical use and symbolism of wreaths, the meaning and representation has taken on differing views, depending on the culture. In Christianity, wreaths are used to prepare for the Advent season
Advent
Advent is a season observed in many Western Christian churches, a time of expectant waiting and preparation for the celebration of the Nativity of Jesus at Christmas. It is the beginning of the Western liturgical year and commences on Advent Sunday, called Levavi...
or the "coming of Christ." The first known association with these now modern day wreaths dates back to the Lutherans
Lutheranism
Lutheranism is a major branch of Western Christianity that identifies with the theology of Martin Luther, a German reformer. Luther's efforts to reform the theology and practice of the church launched the Protestant Reformation...
in Germany in the 16th century. In 1839, Johann Hinrich Wichern
Johann Hinrich Wichern
Johann Hinrich Wichern was a founder of the Home Mission movement in Germany.-Biography:...
used a wreath made from a cart wheel to educate children about the meaning and purpose of Christmas
Christmas
Christmas or Christmas Day is an annual holiday generally celebrated on December 25 by billions of people around the world. It is a Christian feast that commemorates the birth of Jesus Christ, liturgically closing the Advent season and initiating the season of Christmastide, which lasts twelve days...
, as well as to help them count its approach. For every Sunday of Advent, starting with the fourth Sunday before Christmas, he would put a white candle in the wreath and for every day in between he would use a red candle. The Advent wreath is constructed of evergreens to represent everlasting life brought through Jesus and the circular shape of the wreath represents God, with no beginning and no end. The Advent wreath is now a popular symbol in preparation for the coming of Christ, to mark the beginning of the Christian Church’s year and as décor during the Christmas festivities.

A wreath is a headdress made from leaves, flowers and branches. It is typically worn in festive occasions and on holy days.