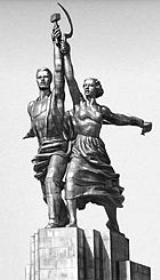 Encyclopedia
Worker and Kolkhoz Woman ( Rabochiy i Kolkhoznitsa) is a 24.5 meter (78 feet) high sculpture
Sculpture
Sculpture is three-dimensional artwork created by shaping or combining hard materials—typically stone such as marble—or metal, glass, or wood. Softer materials can also be used, such as clay, textiles, plastics, polymers and softer metals...
made from stainless steel
Stainless steel
In metallurgy, stainless steel, also known as inox steel or inox from French "inoxydable", is defined as a steel alloy with a minimum of 10.5 or 11% chromium content by mass....
by Vera Mukhina
Vera Mukhina
Vera Ignatyevna Mukhina was a prominent Soviet sculptor.- Life :Mukhina was born in Riga into a wealthy merchant family, and lived at Turgeneva st. 23/25, where a memorial plaque has now been placed. She later moved to Moscow, where she studied at several private art schools, including those of...
for the 1937 World's Fair
Exposition Internationale des Arts et Techniques dans la Vie Moderne (1937)
The Exposition Internationale des Arts et Techniques dans la Vie Moderne was held from May 25 to November 25, 1937 in Paris, France...
in Paris
Paris
Paris is the capital and largest city in France, situated on the river Seine, in northern France, at the heart of the Île-de-France region...
, and subsequently moved to Moscow
Moscow
Moscow is the capital, the most populous city, and the most populous federal subject of Russia. The city is a major political, economic, cultural, scientific, religious, financial, educational, and transportation centre of Russia and the continent...
. The sculpture is an example of the socialist realistic
Socialist realism
Socialist realism is a style of realistic art which was developed in the Soviet Union and became a dominant style in other communist countries. Socialist realism is a teleologically-oriented style having its purpose the furtherance of the goals of socialism and communism...
style, as well as Art Deco
Art Deco
Art deco , or deco, is an eclectic artistic and design style that began in Paris in the 1920s and flourished internationally throughout the 1930s, into the World War II era. The style influenced all areas of design, including architecture and interior design, industrial design, fashion and...
style. The worker holds aloft a hammer and the kolkhoz
Kolkhoz
A kolkhoz , plural kolkhozy, was a form of collective farming in the Soviet Union that existed along with state farms . The word is a contraction of коллекти́вное хозя́йство, or "collective farm", while sovkhoz is a contraction of советское хозяйство...
woman a sickle to form the hammer and sickle
Hammer and sickle
The hammer and sickle is a part of communist symbolism and its usage indicates an association with Communism, a Communist party, or a Communist state. It features a hammer and a sickle overlapping each other. The two tools are symbols of the industrial proletariat and the peasantry; placing them...
symbol.

The sculpture was originally created to crown the Soviet pavilion (architect: Boris Iofan
Boris Iofan
Boris Mihailovich Iofan was a Russian Soviet architect, known for his Stalinist architecture buildings like 1931 House on Embankment and the 1931-1933 winning draft of the Palace of Soviets.- Background :...
) of the World's Fair. The organizers had sited the Soviet and German pavilions facing each other across the main pedestrian boulevard at the Trocadéro
Trocadéro
The Trocadéro, , site of the Palais de Chaillot, , is an area of Paris, France, in the 16th arrondissement, across the Seine from the Eiffel Tower. The hill of the Trocadéro is the hill of Chaillot, a former village.- Origin of the name :...
on the north bank of the Seine.

Mukhina was inspired by her study of the classical Harmodius and Aristogeiton
Harmodius and Aristogeiton
Harmodius and Aristogeiton were two men from ancient Athens...
, the Victory of Samothrace and La Marseillaise
La Marseillaise
"La Marseillaise" is the national anthem of France. The song, originally titled "Chant de guerre pour l'Armée du Rhin" was written and composed by Claude Joseph Rouget de Lisle in 1792. The French National Convention adopted it as the Republic's anthem in 1795...
, François Rude
François Rude
François Rude was a French sculptor. He was the stepfather of Paul Cabet, a sculptor.Born in Dijon, he worked at his father's trade as a stovemaker till the age of sixteen, but received training in drawing from François Devosges, where he learned that a strong, simple contour was an invaluable...
's sculptural group for the Arc de Triomphe
Arc de Triomphe
-The design:The astylar design is by Jean Chalgrin , in the Neoclassical version of ancient Roman architecture . Major academic sculptors of France are represented in the sculpture of the Arc de Triomphe: Jean-Pierre Cortot; François Rude; Antoine Étex; James Pradier and Philippe Joseph Henri Lemaire...
, to bring a monumental composition of socialist realist confidence to the heart of Paris. The symbolism of the two figures striding from East to West, as determined by the layout of the pavilion, was also not lost by spectators.

Although as Mukhina said, her sculpture was intended "to continue the idea inherent in the building, and this sculpture was to be an inseparable part of the whole structure", after the fair Worker and Kolkhoz Woman was relocated to Moscow
Moscow
Moscow is the capital, the most populous city, and the most populous federal subject of Russia. The city is a major political, economic, cultural, scientific, religious, financial, educational, and transportation centre of Russia and the continent...
where it was placed just outside the Exhibition of Achievements of the People's Economy
All-Russia Exhibition Centre
All-Russia Exhibition Centre is a permanent general-purpose trade show in Moscow, Russia....
.

In 1941, the sculpture earned Mukhina one of the initial batch of Stalin Prizes.

The sculpture was removed for restoration in the autumn of 2003 in preparation for Expo 2010
Expo 2010
Expo 2010, officially Expo 2010 Shanghai China was held on both banks of the Huangpu River in the city of Shanghai, China, from May 1 to October 31, 2010. It was a major World Expo in the tradition of international fairs and expositions, the first since 1992...
. The original plan was for it to return in 2005, but because the World's Fair
World's Fair
World's fair, World fair, Universal Exposition, and World Expo are various large public exhibitions held in different parts of the world. The first Expo was held in The Crystal Palace in Hyde Park, London, United Kingdom, in 1851, under the title "Great Exhibition of the Works of Industry of All...
was not awarded to Moscow
Moscow
Moscow is the capital, the most populous city, and the most populous federal subject of Russia. The city is a major political, economic, cultural, scientific, religious, financial, educational, and transportation centre of Russia and the continent...
but to Shanghai
Shanghai
Shanghai is the largest city by population in China and the largest city proper in the world. It is one of the four province-level municipalities in the People's Republic of China, with a total population of over 23 million as of 2010...
, the restoration process was hampered by financial problems and re-installation delayed. See 2007 photographs of the disassembled statue.

It finally returned to its place at VDNKH on November 28, 2009. The revealing of the restored monument was held on the evening of December 4th, 2009, accompanied by fireworks. The restored statue uses a new pavilion as its pedestal, increasing its total height from 34.5 meters (the old pedestal was 10 meters tall) to 60 meters (new pavilion is 34.5 meters tall plus 24.5 meters of the statue's own height) .

In the 1997 film The Saint
The Saint (film)
The Saint is a 1997 film based on the character of Simon Templar created by Leslie Charteris in 1928 for a series of books published as "The Saint." The film stars Val Kilmer, Elisabeth Shue and Rade Šerbedžija...
Treitiak uses a variation of The Worker and Kolkhoz woman holding a sword on campaign posters.
The source of this article is wikipedia, the free encyclopedia.  The text of this article is licensed under the GFDL.