Encyclopedia
The rims
Rim (wheel)
The rim of a wheel is the outer circular design of the metal on which the inside edge of the tire is mounted on vehicles such as automobiles. For example, on a bicycle wheel the rim is a large hoop attached to the outer ends of the spokes of the wheel that holds the tire and tube.In the 1st...
of wire wheels (or "wire spoked wheels") are connected to their hubs by wire spoke
Spoke
A spoke is one of some number of rods radiating from the center of a wheel , connecting the hub with the round traction surface....
s. Although these wire
Wire
A wire is a single, usually cylindrical, flexible strand or rod of metal. Wires are used to bear mechanical loads and to carry electricity and telecommunications signals. Wire is commonly formed by drawing the metal through a hole in a die or draw plate. Standard sizes are determined by various...
s are generally stiffer than a typical wire rope
Wire rope
thumb|Steel wire rope Wire rope is a type of rope which consists of several strands of metal wire laid into a helix. Initially wrought iron wires were used, but today steel is the main material used for wire ropes....
, they function mechanically the same as tensioned flexible wires, keeping the rim true while supporting applied loads.

Wire wheels are used on most bicycle
Bicycle
A bicycle, also known as a bike, pushbike or cycle, is a human-powered, pedal-driven, single-track vehicle, having two wheels attached to a frame, one behind the other. A person who rides a bicycle is called a cyclist, or bicyclist....
s and still used on many motorcycles. They were invented by aeronautical engineer George Cayley
George Cayley
Sir George Cayley, 6th Baronet was a prolific English engineer and one of the most important people in the history of aeronautics. Many consider him the first true scientific aerial investigator and the first person to understand the underlying principles and forces of flight...
and first used in bicycles by James Starley
James Starley
James Starley was an English inventor and father of the bicycle industry. He was one of the most innovative and successful builders of bicycles and tricycles. His inventions include the differential gear and the perfection of chain-driven bicycles.-Early life:Starley was born in 1831 at Albourne,...
. A process of assembling wire wheels is described as wheelbuilding
Wheelbuilding
Wheelbuilding is the art and science of assembling a wheel from its component rim, spokes, nipples and hub.-Goals:...
. 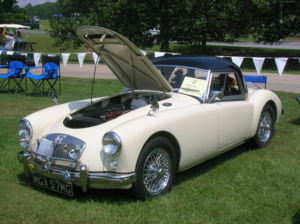 Before 1960, sports/racing cars often had wire wheels equipped with "knockoff" (central wing nut) hubs that could be unscrewed by striking a wing of the nut with a mallet or "knockoff hammer", but in the 1960s cast light-alloy or "Magnesium" wheels became common and now predominate. New versions of wire wheels are made with standard hub bolt patterns covered by a center cap to fit without adapters.

The first commercially successful use of wired wheels was on bicycles. They were introduced early on in the development of the bicycle, following soon after the adoption of solid rubber tires. This development marked a major improvement in bicycles, over the older wooden wheels, both in terms of weight and comfort (the increased elasticity of the wheel helping to absorb road vibrations).

In England, the engineer William Stanley developed the steel-wired spider wheel in 1849, an improvement over the cumbersome wooden spoked wheels then fitted to the tricycles that his employer was making.

Bicycle manufacturers build millions of wheels annually, using the common crossed-spoke patterns whose crossings of adjacent spokes are governed by the number of spokes in the wheel. Wheelbuilders of racing teams and in good bicycle shops build wheels to other patterns such as two-cross, one-cross, or no-cross (usually called radial). Many of these patterns have been used for more than 100 years, it is claimed that crossed patterns have more strength and stability while irregular patterns are art forms and have little structural merit (Brandt, 1993).

In the 1980s, cast wheels with 5 or 6 rigid spokes began to appear in the Olympic Games and professional racing: these have advantages in specialized applications, such as time trials, but wire-spoked wheels are used for most purposes.