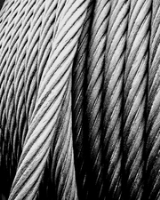 Overview
Wire rope is a type of rope
Rope
A rope is a length of fibres, twisted or braided together to improve strength for pulling and connecting. It has tensile strength but is too flexible to provide compressive strength...
which consists of several strands of metal wire
Wire
A wire is a single, usually cylindrical, flexible strand or rod of metal. Wires are used to bear mechanical loads and to carry electricity and telecommunications signals. Wire is commonly formed by drawing the metal through a hole in a die or draw plate. Standard sizes are determined by various...
laid (or 'twisted') into a helix
Helix
A helix is a type of smooth space curve, i.e. a curve in three-dimensional space. It has the property that the tangent line at any point makes a constant angle with a fixed line called the axis. Examples of helixes are coil springs and the handrails of spiral staircases. A "filled-in" helix – for...
. Initially wrought iron
Wrought iron
thumb|The [[Eiffel tower]] is constructed from [[puddle iron]], a form of wrought ironWrought iron is an iron alloy with a very low carbon...
wires were used, but today steel
Steel
Steel is an alloy that consists mostly of iron and has a carbon content between 0.2% and 2.1% by weight, depending on the grade. Carbon is the most common alloying material for iron, but various other alloying elements are used, such as manganese, chromium, vanadium, and tungsten...
is the main material used for wire ropes.

Historically wire rope evolved from steel chains which had a record of mechanical failure. While flaws in chain links or solid steel bars can lead to catastrophic failure, flaws in the wires making up a steel cable are less critical as the other wires easily take up the load.

If I manufacture a nonrotation cable (8x19)and the cable rotates, What may be the reason for its failure?

What ia an advantage of having a wire rope with a fiber core over that of a wire rope of the same size with a wire core?