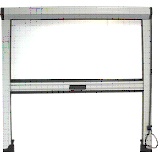 A window screen, insect screen or bug screen is a metal wire, fiberglass
Fiberglass
Glass fiber is a material consisting of numerous extremely fine fibers of glass.Glassmakers throughout history have experimented with glass fibers, but mass manufacture of glass fiber was only made possible with the invention of finer machine tooling...
, or other synthetic fiber mesh, stretched in a frame
Frame and panel
Frame and panel construction is a woodworking technique often used in the making of doors, wainscoting, and other decorative features for cabinets, furniture, and homes...
of wood or metal, designed to cover the opening of an open window
Window
A window is a transparent or translucent opening in a wall or door that allows the passage of light and, if not closed or sealed, air and sound. Windows are usually glazed or covered in some other transparent or translucent material like float glass. Windows are held in place by frames, which...
. Its primary purpose is to keep leaves, debris, insects, birds, and other animals from entering a building or a screened structure such as a porch, while permitting fresh air-flow. Most houses in Australia
Australia
Australia , officially the Commonwealth of Australia, is a country in the Southern Hemisphere comprising the mainland of the Australian continent, the island of Tasmania, and numerous smaller islands in the Indian and Pacific Oceans. It is the world's sixth-largest country by total area...
, the United States
United States
The United States of America is a federal constitutional republic comprising fifty states and a federal district...
and Canada
Canada
Canada is a North American country consisting of ten provinces and three territories. Located in the northern part of the continent, it extends from the Atlantic Ocean in the east to the Pacific Ocean in the west, and northward into the Arctic Ocean...
have screens on all operable windows, which are most useful in areas that have large mosquito
Mosquito
Mosquitoes are members of a family of nematocerid flies: the Culicidae . The word Mosquito is from the Spanish and Portuguese for little fly...
populations. Formerly, screens in North America were usually replaced with glass storm windows in the winter, but now the two functions are usually combined in combination storm and screen windows, which allow glass and screen panels to slide up and down.

The window screens to deny mosquito
Mosquito
Mosquitoes are members of a family of nematocerid flies: the Culicidae . The word Mosquito is from the Spanish and Portuguese for little fly...
s are called mosquito screens, and the ones for denying flies
Fly
True flies are insects of the order Diptera . They possess a pair of wings on the mesothorax and a pair of halteres, derived from the hind wings, on the metathorax...
would be named fly screens.

The most common materials used for insect screening material are aluminum and fiberglass. Aluminum is generally available in natural aluminium or in an applied charcoal color; the charcoal is much less visible. Fiberglass is available in light gray as well as charcoal colors, the charcoal again offering better viewing and appearance. Fiberglass is less expensive, and has the advantage of not "denting" when hit or pushed. However, the fiberglass mesh is somewhat more opaque than aluminum mesh, which darkens the external appearance of the window and reduces the amount of light transmitted from outside. In addition, fiberglass screen degrades rapidly with exposure to UV light, leading to it fraying and breaking after just a few years, unlike aluminum which lasts considerably longer.

For applications requiring greater strength, such as screened doors, nylon and polyester screening are also available.

Bronze insect screening is much more expensive, but gives much longer service than either aluminium or fiberglass. When first installed, it has a bright gold color; this weathers to an unobtrusive dark charcoal within a year or less. Bronze is somewhat more resistant to denting than aluminium. Less common screen fabrics include copper, brass, stainless steel, and galvanized steel.

Several manufacturers offer screens that roll into a pocket when not in use. These are available for casement windows as well as other types of window and door openings.

Do-it-yourself screen and frame replacement kits are widely available at hardware and home improvement stores. These frames are usually composed of straight aluminum sides (which can be cut to size) and plastic corner inserts. Screen replacement kits usually consist of a roll of nylon screening fabric and a generous supply of rubber spline.

Fiberglass screen material is typically available in 100 foot rolls in varying widths, from 18 inches to 120 inches wide. Aluminum screen material is available in 100 foot rolls except the range of available widths is less than for the more commonly used fiberglass.
The fineness of a screen mesh is measured in wires per inch on the warp (length) and the weft or filler (width). An 18×14 mesh has become standard; 16×16 was formerly common and other common sizes are 18×18 and 20×20.

Fiberglass solar screen
Solar screen
The term solar screen generally refers to fixed framed panels of dense mesh which are mounted to the exterior of a commercial or residential window. These may also be installed over skylights, doors, and other fenestrations of a building. In some cases, a solar screen might install in the normal...
s provide over 75% of UV protection, by using thicker strands and a closer mesh than regular 18x14 fiberglass window screening. There is some reduction in visibility, but this can be advantageous, since Solar Screens are difficult to see through from the outside, while easier to see through from the inside.

Finer meshes have been developed to prevent very small insects, often called "noseeums" from flying through. The finer mesh screens are also used to prevent pollens and allergens from entering homes in order to control allergic reactions.

"Wove wire for window screens" were referenced in the American Farmer in 1823. Advertisement for wire window screens appeared in Boyd's Blue Book in 1836. Two wire window screens were exhibited at Quincy Hall in Boston in 1839. In 1861 Gilberr, Bennett and Company was manufacturing wire mesh sieves for food processing. An employee realized that the wire cloth could be painted gray and sold as window screens and the product became an immediate success. On July 7, 1868, Bayley and McCluskey filed a U.S. Patent, number 79541 for screened roof-top rail-car windows, allowing ventilation, while preventing "sparks, cinders, dust, etc." from entering the passenger compartment. By 1874, E.T. Barnum Company of Detroit
Detroit, Michigan
Detroit is the major city among the primary cultural, financial, and transportation centers in the Metro Detroit area, a region of 5.2 million people. As the seat of Wayne County, the city of Detroit is the largest city in the U.S. state of Michigan and serves as a major port on the Detroit River...
, Michigan
Michigan
Michigan is a U.S. state located in the Great Lakes Region of the United States of America. The name Michigan is the French form of the Ojibwa word mishigamaa, meaning "large water" or "large lake"....
advertised screens that were sold by the square foot. Apparently, window screens designed specifically to prevent insect entry were not patented in the United States, although by 1900 several patents were awarded for particular innovations related to window screen design. By the 1950s, parasitic diseases were largely eradicated in the United States
United States
The United States of America is a federal constitutional republic comprising fifty states and a federal district...
in part due to the widespread use of window screens. Today most houses in Australia
Australia
Australia , officially the Commonwealth of Australia, is a country in the Southern Hemisphere comprising the mainland of the Australian continent, the island of Tasmania, and numerous smaller islands in the Indian and Pacific Oceans. It is the world's sixth-largest country by total area...
, the United States
United States
The United States of America is a federal constitutional republic comprising fifty states and a federal district...
and Canada
Canada
Canada is a North American country consisting of ten provinces and three territories. Located in the northern part of the continent, it extends from the Atlantic Ocean in the east to the Pacific Ocean in the west, and northward into the Arctic Ocean...
have screens on all operable windows.

For screens installed on aluminium
Aluminium
Aluminium or aluminum is a silvery white member of the boron group of chemical elements. It has the symbol Al, and its atomic number is 13. It is not soluble in water under normal circumstances....
frames, the material is cut slightly larger than the frame, then laid over it, and a flexible vinyl
Vinyl
A vinyl compound is any organic compound that contains a vinyl group ,which are derivatives of ethene, CH2=CH2, with one hydrogen atom replaced with some other group...
cord, called a spline
Spline
Spline can refer to:* Spline , a mating feature for rotating elements* Spline , a mathematical function used for interpolation or smoothing* Smoothing spline, a method of smoothing using a spline function...
, is pressed over the screen into a groove (spline channel) in the frame. The excess screen is then trimmed close to the spline with a sharp utility knife
Utility knife
A utility knife is a knife used for general or utility purposes. The utility knife was originally a fixed blade knife with a cutting edge suitable for general work such as cutting hides and cordage, scraping hides, butchering animals, cleaning fish, and other tasks.Today, the term "utility knife"...
. Common spline sizes range from .140″ to .190″, in increments of .010″.

The spline is often manufactured with parallel ridges running along the length of the spline to provide a better grip and compliance when it is pressed into the channel. A spline roller — a special tool that consists of a metal (or plastic) wheel on a handle — is used to press the spline into the frame. The wheel edge is concave, to help it hold the spline and not slip off to the side. Some spline rollers are double-ended and have both convex and concave rollers; the convex roller can be used to seat the spline deeper into the channel without risk of cutting the screen. Driving the spline into the channel tends to tension the screen on the frame, so the installer must avoid pre-tensioning the screen excessively to prevent the frame from becoming warped.

When installed using wooden frames, the screen fabric is tacked or stapled onto the frame. A narrow wooden molding is then nailed over the ragged edge. The screening fabric needs to be stretched tightly before nailing, but not so tightly as to deform the fabric.

Because of corrosion problems with dissimilar metals, metal screening fabrics other than aluminium are not used in aluminium frames.

Screen mesh may collect condensation. This effect has been used to collect water from fog.

Screen painting
Screen painting
Screen painting is painting on window screens. It is a folk art form originating in immigrant working class neighborhoods in Baltimore, Maryland in the early 20th century....
is a folk art
Folk art
Folk art encompasses art produced from an indigenous culture or by peasants or other laboring tradespeople. In contrast to fine art, folk art is primarily utilitarian and decorative rather than purely aesthetic....
consisting of paintings on window screens. It is also possible to print images directly onto fiberglass screen cloth using specially designed inkjet printers.
The source of this article is wikipedia, the free encyclopedia.  The text of this article is licensed under the GFDL.