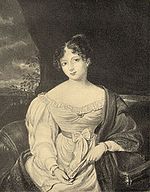 Several months after Augusta's death on 19 February 1841, William morganatically
Morganatic marriage
In the context of European royalty, a morganatic marriage is a marriage between people of unequal social rank, which prevents the passage of the husband's titles and privileges to the wife and any children born of the marriage...
married his mistress and their children were legitimated. Emilie Ortlöpp died less than two years after the marriage in 1843.