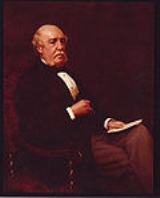 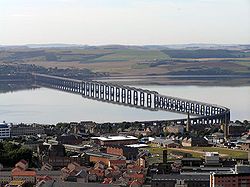 On 28 December 1879, the central section of the North British Railway
North British Railway
The North British Railway was a Scottish railway company that was absorbed into the London and North Eastern Railway at the Grouping in 1923.-History:...
's bridge
Bridge
A bridge is a structure built to span physical obstacles such as a body of water, valley, or road, for the purpose of providing passage over the obstacle...
across the River Tay
River Tay
The River Tay is the longest river in Scotland and the seventh-longest in the United Kingdom. The Tay originates in western Scotland on the slopes of Ben Lui , then flows easterly across the Highlands, through Loch Dochhart, Loch Lubhair and Loch Tay, then continues east through Strathtay , in...
near Dundee
Dundee
Dundee is the fourth-largest city in Scotland and the 39th most populous settlement in the United Kingdom. It lies within the eastern central Lowlands on the north bank of the Firth of Tay, which feeds into the North Sea...
collapsed in the Tay Bridge disaster
Tay Bridge disaster
The Tay Bridge disaster occurred on 28 December 1879, when the first Tay Rail Bridge, which crossed the Firth of Tay between Dundee and Wormit in Scotland, collapsed during a violent storm while a train was passing over it. The bridge was designed by the noted railway engineer Sir Thomas Bouch,...
as an express train crossed it in a heavy storm. All 75 passengers and crew on the train were killed. As the newly elected President of the Institution of Civil Engineers, Barlow was appointed as a member of the Board of Trade
Board of Trade
The Board of Trade is a committee of the Privy Council of the United Kingdom, originating as a committee of inquiry in the 17th century and evolving gradually into a government department with a diverse range of functions...
's Court of Inquiry into the disaster. He sat with Henry Cadogan Rothery
Henry Cadogan Rothery
Henry Cadogan Rothery was an English lawyer and commissioner of wrecks , especially remembered for chairing the inquiry into the Tay Bridge disaster in 1879.-Life:...
and William Yolland
William Yolland
William Yolland CB, FRS was an English military surveyor, astronomer and engineer, and was Britain’s Chief Inspector of Railways from 1877 until his death...
, co-authoring one of the final reports with Yolland recommending a commission be established to examine wind loads on bridges. In its report dated 30 June 1880, the Court of Inquiry concluded that the bridge, designed by Sir Thomas Bouch
Thomas Bouch
Sir Thomas Bouch was a British railway engineer in Victorian Britain.He was born in Thursby, near Carlisle, Cumberland, England and lived in Edinburgh. He helped develop the caisson and the roll-on/roll-off train ferry. He worked initially for the North British Railway and helped design parts of...
and opened only the year before its collapse, had been "badly designed, badly built and badly maintained". The entire central box truss
Box truss
A box truss is a structure composed of three or more chords connected by transverse and/or diagonal structural elements.-Application:Box trusses are commonly used in certain types of aircraft fuselages, electric power pylons, large radio antennas, and many bridge structures...
section of the bridge known as the "High Girders" collapsed along with the thirteen trestle
Trestle
A trestle is a rigid frame used as a support, especially referring to a bridge composed of a number of short spans supported by such frames. In the context of trestle bridges, each supporting frame is generally referred to as a bent...
s supporting it, leaving a gap of nearly half-a-mile in the 2 miles (3.2 km) long bridge.

His reputation destroyed, Bouch died in October 1880. Work on the suspension bridge
Suspension bridge
A suspension bridge is a type of bridge in which the deck is hung below suspension cables on vertical suspenders. Outside Tibet and Bhutan, where the first examples of this type of bridge were built in the 15th century, this type of bridge dates from the early 19th century...
he had designed to cross the Firth of Forth
Firth of Forth
The Firth of Forth is the estuary or firth of Scotland's River Forth, where it flows into the North Sea, between Fife to the north, and West Lothian, the City of Edinburgh and East Lothian to the south...
was stopped after the Tay Bridge collapse and Barlow, Sir John Fowler and Thomas Elliot Harrison, consultant engineers for the three railway companies involved in the construction, were asked to choose a replacement design. The solution was the cantilevered
Cantilever bridge
A cantilever bridge is a bridge built using cantilevers, structures that project horizontally into space, supported on only one end. For small footbridges, the cantilevers may be simple beams; however, large cantilever bridges designed to handle road or rail traffic use trusses built from...
Forth Bridge
Forth Bridge
The Forth Bridge is a cantilever railway bridge over the Firth of Forth in the east of Scotland, to the east of the Forth Road Bridge, and 14 kilometres west of central Edinburgh. It was opened on 4 March 1890, and spans a total length of...
by Fowler and Sir Benjamin Baker.

In 1881 Barlow sat as member of the Wind Pressure (Railway Structures) Commission established at the recommendation of the Tay Bridge report. He led the design of the replacement Tay Bridge
Tay Rail Bridge
The Tay Bridge is a railway bridge approximately two and a quarter miles long that spans the Firth of Tay in Scotland, between the city of Dundee and the suburb of Wormit in Fife ....
(1882–87) with his son Crawford Barlow as engineer. The new design used large monocoque
Monocoque
Monocoque is a construction technique that supports structural load by using an object's external skin, as opposed to using an internal frame or truss that is then covered with a non-load-bearing skin or coachwork...
piers to support a double railway track. The old brick and masonry piers from the first bridge were retained as breakwaters
Breakwater (structure)
Breakwaters are structures constructed on coasts as part of coastal defence or to protect an anchorage from the effects of weather and longshore drift.-Purposes of breakwaters:...
for the new piers upstream. They can still be seen today as a forlorn reminder of the tragedy of 1879.

Barlow was an early experimenter with civil engineering uses for steel, carrying out research at Woolwich Arsenal in the 1850s and being a member of the Institution of Civil Engineers' committee on the subject. From 1873 he was a member of a Board of Trade committee which produced the first recommendations on safe working loads for steel in railway structures in 1877.

Barlow also experimented with sound recording. In February 1874 he presented the Royal Society
Royal Society
The Royal Society of London for Improving Natural Knowledge, known simply as the Royal Society, is a learned society for science, and is possibly the oldest such society in existence. Founded in November 1660, it was granted a Royal Charter by King Charles II as the "Royal Society of London"...
with a talk On the Pneumatic Action which accompanies the Articulation of Sounds by the Human Voice, as exhibited by a Recording Instrument. He called his 'recording instrument' a Logograph.

Barlow was a Fellow of the Royal Society of Edinburgh
Royal Society of Edinburgh
The Royal Society of Edinburgh is Scotland's national academy of science and letters. It is a registered charity, operating on a wholly independent and non-party-political basis and providing public benefit throughout Scotland...
, a member of the Institution of Mechanical Engineers
Institution of Mechanical Engineers
The Institution of Mechanical Engineers is the British engineering society based in central London, representing mechanical engineering. It is licensed by the Engineering Council UK to assess candidates for inclusion on ECUK's Register of professional Engineers...
and the Society of Arts. He served as Vice President of the Royal Society in 1881 and was an honorary member of the Société des Ingénieurs Civil de France. He was also a Lieutenant-Colonel in the Railway Volunteer Staff Corps
Engineer and Logistic Staff Corps
The Engineer and Logistic Staff Corps is a part of the Royal Engineers in the British Territorial Army. It is intended to provide advisers on engineering and logistics to the British Army at a senior level.- History :...
.

With his health failing, he retired from practice in 1896, along with his son. He died on 12 November 1902 from exhaustion after breaking his leg. His home "High Combe", Charlton Road, Greenwich, is marked with a blue plaque
Blue plaque
A blue plaque is a permanent sign installed in a public place to commemorate a link between that location and a famous person or event, serving as a historical marker....
.