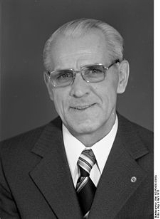 Born in Berlin
Berlin
Berlin is the capital city of Germany and is one of the 16 states of Germany. With a population of 3.45 million people, Berlin is Germany's largest city. It is the second most populous city proper and the seventh most populous urban area in the European Union...
in 1914, Stoph's father died the following year in World War I
World War I
World War I , which was predominantly called the World War or the Great War from its occurrence until 1939, and the First World War or World War I thereafter, was a major war centred in Europe that began on 28 July 1914 and lasted until 11 November 1918...
. In 1928, the young Stoph joined the Communist
Communism
Communism is a social, political and economic ideology that aims at the establishment of a classless, moneyless, revolutionary and stateless socialist society structured upon common ownership of the means of production...
Youth League of Germany
Germany
Germany , officially the Federal Republic of Germany , is a federal parliamentary republic in Europe. The country consists of 16 states while the capital and largest city is Berlin. Germany covers an area of 357,021 km2 and has a largely temperate seasonal climate...
(Kommunistischer Jugendverband Deutschlands; KJVD) and, in 1931, he joined the Communist Party of Germany
Communist Party of Germany
The Communist Party of Germany was a major political party in Germany between 1918 and 1933, and a minor party in West Germany in the postwar period until it was banned in 1956...
. He also served in the Wehrmacht
Wehrmacht
The Wehrmacht – from , to defend and , the might/power) were the unified armed forces of Nazi Germany from 1935 to 1945. It consisted of the Heer , the Kriegsmarine and the Luftwaffe .-Origin and use of the term:...
from 1935 to 1937, and again during World War II
World War II
World War II, or the Second World War , was a global conflict lasting from 1939 to 1945, involving most of the world's nations—including all of the great powers—eventually forming two opposing military alliances: the Allies and the Axis...
from 1940 to 1945. He was awarded the Iron Cross
Iron Cross
The Iron Cross is a cross symbol typically in black with a white or silver outline that originated after 1219 when the Kingdom of Jerusalem granted the Teutonic Order the right to combine the Teutonic Black Cross placed above a silver Cross of Jerusalem....
2nd Class and rose to the rank of Unteroffizier
Unteroffizier
Unteroffizier is both a specific military rank as well as a collective term for non-commissioned officers of the German military that has existed since the 19th century. The rank existed as a title as early as the 17th century with the first widespread usage occurring in the Bavarian Army of the...
.

From 1964 to 1973, he was Chairman of the Council of Ministers (Ministerrat
Ministerrat
The Council of Ministers of the German Democratic Republic was the chief executive body of East Germany from November 1950 until the GDR was unified with the Federal Republic of Germany on 3 October 1990...
). After the death of Walter Ulbricht
Walter Ulbricht
Walter Ulbricht was a German communist politician. As First Secretary of the Socialist Unity Party from 1950 to 1971 , he played a leading role in the creation of the Weimar-era Communist Party of Germany and later in the early development and...
in 1973, Stoph became Chairman of the Council of State, and thus, head of state of the GDR. After Volkskammer elections in 1976, the state and party leadership structure was re-arranged, and Stoph once again became Chairman of the Council of Ministers.
As Prime Minister, Stoph began a series of negotiations with West German
West Germany
West Germany is the common English, but not official, name for the Federal Republic of Germany or FRG in the period between its creation in May 1949 to German reunification on 3 October 1990....
Chancellor Willy Brandt
Willy Brandt
Willy Brandt, born Herbert Ernst Karl Frahm , was a German politician, Mayor of West Berlin 1957–1966, Chancellor of West Germany 1969–1974, and leader of the Social Democratic Party of Germany 1964–1987....
in 1970. It marked the first ever meeting between the leaders of East and West Germany.

Following the ousting of Erich Honecker
Erich Honecker
Erich Honecker was a German communist politician who led the German Democratic Republic as General Secretary of the Socialist Unity Party from 1971 until 1989, serving as Head of State as well from Willi Stoph's relinquishment of that post in 1976....
in October 1989, Stoph and all 44 members of his cabinet resigned on 7 November in response to public pressure. On 8 November, the Central Committee of the SED nominated Hans Modrow
Hans Modrow
Hans Modrow is a German politician, best known as the last communist premier of East Germany. He currently is the honorary Chairman of the Left Party....
as Stoph's replacement. Stoph was subsequently arrested for corruption in December 1989. He was later spared detention due to health reasons. In 1994, a court in Berlin
Berlin
Berlin is the capital city of Germany and is one of the 16 states of Germany. With a population of 3.45 million people, Berlin is Germany's largest city. It is the second most populous city proper and the seventh most populous urban area in the European Union...
decided that he should not get back his seized savings of 200,000 DM.

Stoph died in Berlin on 13 April 1999. He was buried in Wildau
Wildau
Wildau is a German municipality of the state of Brandenburg, located in the district of Dahme-Spreewald. It is located close to Berlin and easily reached by the S-Bahn...
.
|-
|-
The source of this article is wikipedia, the free encyclopedia.  The text of this article is licensed under the GFDL.