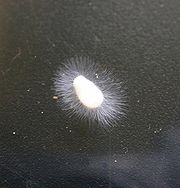 Oömycota or oömycetes form a distinct phylogenetic lineage of fungus-like eukaryotic microorganisms (Protists). They are filamentous, microscopic, absorptive organisms that reproduce both sexually and asexually. Oomycetes occupy both saprophytic and pathogenic lifestyles – and include some of the most notorious pathogens of plants, causing devastating diseases such as late blight of potato and sudden oak death
Sudden oak death
Sudden Oak Death is the common name of a disease caused by the oomycete plant pathogen Phytophthora ramorum. The disease kills oak and other species of tree and has had devastating effects on the oak populations in California and Oregon as well as also being present in Europe...
. They are also often referred to as water molds (or water moulds), although the water-loving nature which led to that name is not true of most species, which are terrestrial pathogens.

The oomycetes rarely have septa (see hypha
Hypha
A hypha is a long, branching filamentous structure of a fungus, and also of unrelated Actinobacteria. In most fungi, hyphae are the main mode of vegetative growth, and are collectively called a mycelium; yeasts are unicellular fungi that do not grow as hyphae.-Structure:A hypha consists of one or...
), and if they do, they are scarce, appearing at the bases of sporangia, and sometimes in older parts of the filaments. Some are unicellular, but others are filamentous and branching.

The group is arranged into six orders. Briefly:
(The above after ).

Most of the oomycetes produce two distinct types of spores. The main dispersive spores are asexual, self-motile spore
Spore
In biology, a spore is a reproductive structure that is adapted for dispersal and surviving for extended periods of time in unfavorable conditions. Spores form part of the life cycles of many bacteria, plants, algae, fungi and some protozoa. According to scientist Dr...
s called zoospore
Zoospore
A zoospore is a motile asexual spore that uses a flagellum for locomotion. Also called a swarm spore, these spores are created by some algae, bacteria and fungi to propagate themselves.-Flagella:...
s, which are capable of chemotaxis (movement toward or away from a chemical signal, such as those released by potential food sources) in surface water (including precipitation on plant surfaces). A few oomycetes produce aerial asexual spores that are distributed by wind. They also produce sexual spores, called oospore
Oospore
An oospore is a thick-walled sexual spore that develops from a fertilized oosphere in some algae and fungi. Also the result of plasmogamy/karyogamy in oomycetes, which in turn leads to the development of hyphae, then mycelium....
s, that are translucent, double-walled, spherical structures used to survive adverse environmental conditions.

Although this group was traditionally classified as protists based on general morphology and lifestyle, a cladistic classification based on modern insights supports a relatively close relationship with the photosynthetic organisms such as brown algae and diatom
Diatom
Diatoms are a major group of algae, and are one of the most common types of phytoplankton. Most diatoms are unicellular, although they can exist as colonies in the shape of filaments or ribbons , fans , zigzags , or stellate colonies . Diatoms are producers within the food chain...
s, within the heterokont
Heterokont
The heterokonts or stramenopiles are a major line of eukaryotes currently containing more than 100,000 known species. Most are algae, ranging from the giant multicellular kelp to the unicellular diatoms, which are a primary component of plankton...
s.

This relationship is supported by a number of observed differences in the characteristics of oomycetes and fungi. For instance, the cell wall
Cell wall
The cell wall is the tough, usually flexible but sometimes fairly rigid layer that surrounds some types of cells. It is located outside the cell membrane and provides these cells with structural support and protection, and also acts as a filtering mechanism. A major function of the cell wall is to...
s of oomycetes are composed of cellulose
Cellulose
Cellulose is an organic compound with the formula , a polysaccharide consisting of a linear chain of several hundred to over ten thousand β linked D-glucose units....
rather than chitin
Chitin
Chitin n is a long-chain polymer of a N-acetylglucosamine, a derivative of glucose, and is found in many places throughout the natural world...
and generally do not have septations
Septum
In anatomy, a septum is a wall, dividing a cavity or structure into smaller ones.-In human anatomy:...
. Also, in the vegetative state they have diploid nuclei, whereas fungi have haploid nuclei. Most oomycetes produce self-motile zoospores with two flagella. One flagellum has a "whiplash" morphology, and the other a branched "tinsel" morphology. Spores of the few fungal groups which retain flagella (such as the Chytridiomycetes
Chytridiomycetes
Chytridiomycetes is a class of fungi. Members are found in soil, fresh water, and saline estuaries. They are primitive fungi, closely related to the true fungi, and are first known from the Rhynie chert. It has recently been redefined to exclude the taxa Neocallimastigomycota and...
) have only one whiplash flagellum. Oomycota and fungi have different metabolic pathways for synthesizing lysine
Lysine
Lysine is an α-amino acid with the chemical formula HO2CCH4NH2. It is an essential amino acid, which means that the human body cannot synthesize it. Its codons are AAA and AAG....
and have a number of enzymes which differ. The ultrastructure is also different, with oomycota having tubular mitochondrial cristae and fungi having flattened cristae.
In spite of this, many species
Species
In biology, a species is one of the basic units of biological classification and a taxonomic rank. A species is often defined as a group of organisms capable of interbreeding and producing fertile offspring. While in many cases this definition is adequate, more precise or differing measures are...
of oomycetes are still described or listed as types of fungi and may sometimes be referred to as pseudofungi, or lower fungi.

"Oomycota" means "egg fungi", referring to the large round oogonia, structures containing the female gametes, that are characteristic of the oomycetes.

The name "water mold" refers to their earlier classification as fungi and their preference for conditions of high humidity and running surface water, which is characteristic for the basal taxa of the oomycetes.