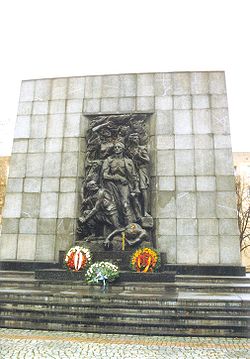 The incident took place during a visit to a monument to the Nazi
Nazism
Nazism, the common short form name of National Socialism was the ideology and practice of the Nazi Party and of Nazi Germany...
-era Warsaw Ghetto Uprising
Warsaw Ghetto Uprising
The Warsaw Ghetto Uprising was the Jewish resistance that arose within the Warsaw Ghetto in German occupied Poland during World War II, and which opposed Nazi Germany's effort to transport the remaining ghetto population to Treblinka extermination camp....
on December 7, 1970, in what was then the communist People's Republic of Poland
People's Republic of Poland
The People's Republic of Poland was the official name of Poland from 1952 to 1990. Although the Soviet Union took control of the country immediately after the liberation from Nazi Germany in 1944, the name of the state was not changed until eight years later...
. After laying down a wreath
Wreath
A wreath is an assortment of flowers, leaves, fruits, twigs and/or various materials that is constructed to resemble a ring. They are used typically as Christmas decorations to symbolize the coming of Christ, also known as the Advent season in Christianity. They are also used as festive headdresses...
, Brandt, very surprisingly, and to all appearances spontaneously, knelt. He remained silently in that position for a short time, surrounded by a large group of dignitaries and press photographers.

Brandt had actively resisted the early Nazi regime, and had spent most of the time of Hitler's reign in exile
Exile
Exile means to be away from one's home , while either being explicitly refused permission to return and/or being threatened with imprisonment or death upon return...
. The occasion of Brandt's visit to Poland at the time was the signing of the Treaty of Warsaw
Treaty of Warsaw (1970)
The Treaty of Warsaw was a treaty between West Germany and the People's Republic of Poland. It was signed by Chancellor Willy Brandt and Prime Minister Józef Cyrankiewicz at the Presidential Palace on 7 December 1970, and it was ratified by the German Bundestag on 17 May 1972.In the treaty, both...
between West Germany
West Germany
West Germany is the common English, but not official, name for the Federal Republic of Germany or FRG in the period between its creation in May 1949 to German reunification on 3 October 1990....
and the People's Republic of Poland
People's Republic of Poland
The People's Republic of Poland was the official name of Poland from 1952 to 1990. Although the Soviet Union took control of the country immediately after the liberation from Nazi Germany in 1944, the name of the state was not changed until eight years later...
, guaranteeing German acceptance of the new borders of Poland
Territorial changes of Poland after World War II
The territorial changes of Poland after World War II were very extensive. In 1945, following the Second World War, Poland's borders were redrawn following the decisions made at the Potsdam Conference of 1945 at the insistence of the Soviet Union...
. The treaty was one of the Brandt-initiated policy steps (the 'Ostpolitik
Ostpolitik
Neue Ostpolitik , or Ostpolitik for short, refers to the normalization of relations between the Federal Republic of Germany and Eastern Europe, particularly the German Democratic Republic beginning in 1969...
') to ease tensions between West and East during the Cold War
Cold War
The Cold War was the continuing state from roughly 1946 to 1991 of political conflict, military tension, proxy wars, and economic competition between the Communist World—primarily the Soviet Union and its satellite states and allies—and the powers of the Western world, primarily the United States...
. 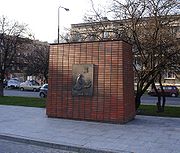 On the same day, Brandt signed the Treaty of Warsaw, which acknowledged the Oder-Neiße-Line as the final German border with Poland. Both actions attracted controversy within Germany, much like Ostpolitik in general, gaining only a narrow majority in public opinion. It was disputed within his own party, which had had (compare Herbert Hupka
Herbert Hupka
Herbert Hupka was a German journalist and politician .Hupka was born in Diyatalawa, Sri Lanka, to a Silesian German Catholic professor Erich Hupka and a Jewish-German Lutheran mother Sara Rosenthal. Herbert Hupka raised in Ratibor, Upper Silesia...
) a significant share of voters within former expellees which mostly went to the conservative parties.

According to a Der Spiegel
Der Spiegel
Der Spiegel is a German weekly news magazine published in Hamburg. It is one of Europe's largest publications of its kind, with a weekly circulation of more than one million.-Overview:...
survey of the time, 48% of all West Germans thought the "Kniefall" was exaggerated, 41% said it was appropriate and 11% had no opinion. The Kniefall was a symbolic action the opposition tried to use against Brandt, e.g. within a Constructive Vote of No Confidence
Constructive vote of no confidence
The constructive vote of no confidence is a variation on the motion of no confidence which allows a parliament to withdraw confidence from a head of government only if there is a positive majority for a prospective successor...
in April 1972 which he survived by only two votes. The "Willy-Wahl", Brandt's landslide win in following elections was as well based on most German views that Brandt's Ostpolitik - symbolized by the Kniefall - as well as his reformist domestic policies was helping Germany to gain international reputation and was to be supported. It led his SPD party to its best-ever federal election result in late 1972.

While at the time, positive reactions may have been limited, his show of humility was a small but vital step in bridging the gaps World War II
World War II
World War II, or the Second World War , was a global conflict lasting from 1939 to 1945, involving most of the world's nations—including all of the great powers—eventually forming two opposing military alliances: the Allies and the Axis...
had left between Germany
Germany
Germany , officially the Federal Republic of Germany , is a federal parliamentary republic in Europe. The country consists of 16 states while the capital and largest city is Berlin. Germany covers an area of 357,021 km2 and has a largely temperate seasonal climate...
and Eastern Europe
Eastern Europe
Eastern Europe is the eastern part of Europe. The term has widely disparate geopolitical, geographical, cultural and socioeconomic readings, which makes it highly context-dependent and even volatile, and there are "almost as many definitions of Eastern Europe as there are scholars of the region"...
. In historical terms, Brandt gained much renown for this act, and it is thought to be one of the reasons he received the Nobel Peace Prize
Nobel Peace Prize
The Nobel Peace Prize is one of the five Nobel Prizes bequeathed by the Swedish industrialist and inventor Alfred Nobel.-Background:According to Nobel's will, the Peace Prize shall be awarded to the person who...
in 1971.

Brandt was repeatedly interviewed about the genuflection and about his motives. He later noted that:
"Unter der Last der jüngsten Geschichte tat ich, was Menschen tun, wenn die Worte versagen. So gedachte ich Millionen Ermordeter."
Under the weight of recent history, I did what people do when words fail them. In this way I commemorated millions of murdered people.