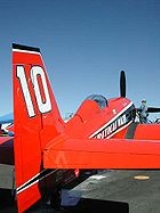 Although the term originally implied piston-driven aircraft from the World War II
World War II
World War II, or the Second World War , was a global conflict lasting from 1939 to 1945, involving most of the world's nations—including all of the great powers—eventually forming two opposing military alliances: the Allies and the Axis...
era, it is now often extended to include all military aircraft, including jet-powered aircraft, that are no longer in military service. Vintage jet aircraft in flyable condition, however, are much rarer due to technical complexity.

Sometimes, the term "warbird" also applies to newly built replicas and reproductions of vintage aircraft, such as Allison V-1710 powered Yak-9s from Yakovlev
Yakovlev
The Yak Aircraft Corporation is a Russian aircraft designer and manufacturer...
, Me 262s built by the Me 262 Project
Me 262 Project
The Me 262 Project is a company formed to build flyable reproductions of the Messerschmitt Me 262, the world's first operational jet fighter. The project was started with the Texas Airplane Factory and administered by Classic Fighter Industries. It is based at Paine Field in Everett, Washington,...
and FW 190s by Flug Werk, and can, for earlier eras when military aircraft design was of a less complex nature, even include any one of a large number of different World War I and later military aircraft designs, up through the late 1930s in origin, sometimes powered by vintage engines from the era of the aircraft design being flown.

Restored warbirds
Vintage warbird restoration
Vintage Warbird Restoration or classic aircraft restoration is the process of taking exotic and complex aircraft from the World War II and postwar era, and performing processes such as maintenance, repairs and refurbishments in order to restore these military aircraft to their original wartime...
are a frequent attraction at airshow
Airshow
An air show is an event at which aviators display their flying skills and the capabilities of their aircraft to spectators in aerobatics. Air shows without aerobatic displays, having only aircraft displayed parked on the ground, are called "static air shows"....
s. Highly modified as well as "stock" warbirds can also frequently be seen at air races, since late-war fighter planes are among the fastest propeller-driven planes ever built. Some of the most popular warbirds for races are the North American Aviation
North American Aviation
North American Aviation was a major US aerospace manufacturer, responsible for a number of historic aircraft, including the T-6 Texan trainer, the P-51 Mustang fighter, the B-25 Mitchell bomber, the F-86 Sabre jet fighter, the X-15 rocket plane, and the XB-70, as well as Apollo Command and Service...
P-51 Mustang, the Hawker
Hawker Aircraft
Hawker Aircraft Limited was a British aircraft manufacturer responsible for some of the most famous products in British aviation history.-History:...
Sea Fury
Hawker Sea Fury
The Hawker Sea Fury was a British fighter aircraft developed for the Royal Navy by Hawker during the Second World War. The last propeller-driven fighter to serve with the Royal Navy, it was also one of the fastest production single piston-engined aircraft ever built.-Origins:The Hawker Fury was an...
, the Grumman F8F Bearcat, and the North American T-6 Texan
North American T-6 Texan
The North American Aviation T-6 Texan was a single-engine advanced trainer aircraft used to train pilots of the United States Army Air Forces, United States Navy, Royal Air Force and other air forces of the British Commonwealth during World War II and into the 1950s...
.