Encyclopedia
The Temora Aviation Museum is an Australian
Australia
Australia , officially the Commonwealth of Australia, is a country in the Southern Hemisphere comprising the mainland of the Australian continent, the island of Tasmania, and numerous smaller islands in the Indian and Pacific Oceans. It is the world's sixth-largest country by total area...
aerospace museum located in Temora, New South Wales
Temora, New South Wales
Temora is a town located in north east part of the Riverina area of New South Wales, south-west of the state capital, Sydney. At the 2006 census the population of Temora was 4,086.-History:...
. The Museum was established in late 1999, based on the collection of warbird
Warbird
Warbird is a term used, predominantly in North America, to describe vintage military aircraft.- Naming :Although the term originally implied piston-driven aircraft from the World War II era, it is now often extended to include all military aircraft, including jet-powered aircraft, that are no...
aircraft owned by David Lowy. Lowy remains the President of the Museum, which is overseen by a seven-member Governing Committee.

The Museum is home to many historic military and civilian aircraft that range from the World War II
World War II
World War II, or the Second World War , was a global conflict lasting from 1939 to 1945, involving most of the world's nations—including all of the great powers—eventually forming two opposing military alliances: the Allies and the Axis...
era to the Vietnam War
Vietnam War
The Vietnam War was a Cold War-era military conflict that occurred in Vietnam, Laos, and Cambodia from 1 November 1955 to the fall of Saigon on 30 April 1975. This war followed the First Indochina War and was fought between North Vietnam, supported by its communist allies, and the government of...
era and holds Flying Weekends (normally once approximately every six weeks) to display its operating aircraft. 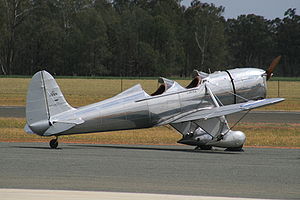 Unless otherwise noted, all of the museum's aircraft are airworthy and are flown regularly during the Museum's Showcase Days, Special major airshow days at Temora and at airshows elsewhere in Australia such as those at the RAAF Museum, Historical Aircraft Restoration Society (HARS),RAN Fleet Air Arm Museum (HMAS Albatross), Tyabb, Victoria and the like.