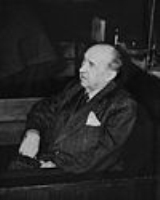 Encyclopedia
Walther Funk was a prominent Nazi official. He served as Reich Minister for Economic Affairs in Nazi Germany
Nazi Germany
Nazi Germany , also known as the Third Reich , but officially called German Reich from 1933 to 1943 and Greater German Reich from 26 June 1943 onward, is the name commonly used to refer to the state of Germany from 1933 to 1945, when it was a totalitarian dictatorship ruled by...
from 1937 to 1945, tried as a major war criminal by the International Military Tribunal at Nuremberg
Nuremberg Trials
The Nuremberg Trials were a series of military tribunals, held by the victorious Allied forces of World War II, most notable for the prosecution of prominent members of the political, military, and economic leadership of the defeated Nazi Germany....
.

Funk was born into a merchant family in 1890 in Danzkehmen (present-day Sosnowka in the Russian Kaliningrad Oblast
Kaliningrad Oblast
Kaliningrad Oblast is a federal subject of Russia situated on the Baltic coast. It has a population of The oblast forms the westernmost part of the Russian Federation, but it has no land connection to the rest of Russia. Since its creation it has been an exclave of the Russian SFSR and then the...
) near Trakehnen
Yasnaya Polyana, Kaliningrad Oblast
Yasnaya Polyana is a rural settlement in the Nesterovsky District of Kaliningrad Oblast, Russia. It is located in the southeast of the oblast, north of the Romincka Forest...
in East Prussia
East Prussia
East Prussia is the main part of the region of Prussia along the southeastern Baltic Coast from the 13th century to the end of World War II in May 1945. From 1772–1829 and 1878–1945, the Province of East Prussia was part of the German state of Prussia. The capital city was Königsberg.East Prussia...
. He was the son of Wiesenbaumeister Walther Funk the elder and his wife Sophie (née Urbschat). He studied law, economics, and philosophy at the Humboldt University of Berlin
Humboldt University of Berlin
The Humboldt University of Berlin is Berlin's oldest university, founded in 1810 as the University of Berlin by the liberal Prussian educational reformer and linguist Wilhelm von Humboldt, whose university model has strongly influenced other European and Western universities...
and the University of Leipzig
University of Leipzig
The University of Leipzig , located in Leipzig in the Free State of Saxony, Germany, is one of the oldest universities in the world and the second-oldest university in Germany...
. In World War I
World War I
World War I , which was predominantly called the World War or the Great War from its occurrence until 1939, and the First World War or World War I thereafter, was a major war centred in Europe that began on 28 July 1914 and lasted until 11 November 1918...
, he joined the infantry, but was discharged as unfit for service in 1916. In 1920, Funk married Luise Schmidt-Sieben. Following the war, he worked as a journalist, and in 1924 he became the editor of the center-right financial newspaper the Berliner Börsenzeitung.

Funk, who was a nationalist and anti-Marxist, resigned from the newspaper in the summer of 1931 and joined the Nazi Party, becoming close to Gregor Strasser
Gregor Strasser
Gregor Strasser was a politician of the National Socialist German Workers Party...
, who arranged his first meeting with Adolf Hitler
Adolf Hitler
Adolf Hitler was an Austrian-born German politician and the leader of the National Socialist German Workers Party , commonly referred to as the Nazi Party). He was Chancellor of Germany from 1933 to 1945, and head of state from 1934 to 1945...
. Partially because of his interest in economic policy, he was elected a Reichstag
Reichstag (Weimar Republic)
The Reichstag was the parliament of Weimar Republic .German constitution commentators consider only the Reichstag and now the Bundestag the German parliament. Another organ deals with legislation too: in 1867-1918 the Bundesrat, in 1919–1933 the Reichsrat and from 1949 on the Bundesrat...
deputy in July 1932, and within the party, he was made chairman of the Committee on Economic Policy in December 1932, a post that he did not hold for long. After the Nazi Party came to power, he stepped down from his Reichstag position and was made Chief Press Officer of the Third Reich.

In March 1933, Funk was appointed as a State Secretary (Staatssekretär) at the Ministry of Public Enlightenment and Propaganda
Ministry of Public Enlightenment and Propaganda
The Reich Ministry of Public Enlightenment and Propaganda was Nazi Germany's ministry that enforced Nazi Party ideology in Germany and regulated its culture and society. Founded on March 13, 1933, by Adolf Hitler's new National Socialist government, the Ministry was headed by Dr...
(Reichsministerium für Volksaufklärung und Propaganda). In 1938, he assumed the title of Chief Plenipotentiary
Plenipotentiary
The word plenipotentiary has two meanings. As a noun, it refers to a person who has "full powers." In particular, the term commonly refers to a diplomat fully authorized to represent his government as a prerogative...
for Economics (Wirtschaftsbeauftragter). He also became Reich Minister of Economics (Reichswirtschaftsminister) in February 1938, replacing Hjalmar Schacht
Hjalmar Schacht
Dr. Hjalmar Horace Greeley Schacht was a German economist, banker, liberal politician, and co-founder of the German Democratic Party. He served as the Currency Commissioner and President of the Reichsbank under the Weimar Republic...
, who had been dropped in November 1937. Schacht had been dismissed in a power struggle with Reichsmarschall
Reichsmarschall
Reichsmarschall literally in ; was the highest rank in the armed forces of Nazi Germany during World War II after the position of Supreme Commander held by Adolf Hitler....
Hermann Göring
Hermann Göring
Hermann Wilhelm Göring, was a German politician, military leader, and a leading member of the Nazi Party. He was a veteran of World War I as an ace fighter pilot, and a recipient of the coveted Pour le Mérite, also known as "The Blue Max"...
, who was quick to tie the ministry more closely to his Four Year Plan Office.

He boasted that by 1938, the authorities had managed to steal Jewish property worth two million marks.

In January 1939, Hitler appointed Funk as President of the Reichsbank
Reichsbank
The Reichsbank was the central bank of Germany from 1876 until 1945. It was founded on 1 January 1876 . The Reichsbank was a privately owned central bank of Prussia, under close control by the Reich government. Its first president was Hermann von Dechend...
, again replacing Schacht, and this way he became also a member of the board of directors of the Bank for International Settlements
Bank for International Settlements
The Bank for International Settlements is an intergovernmental organization of central banks which "fosters international monetary and financial cooperation and serves as a bank for central banks." It is not accountable to any national government...
, based in Switzerland
Switzerland
Switzerland name of one of the Swiss cantons. ; ; ; or ), in its full name the Swiss Confederation , is a federal republic consisting of 26 cantons, with Bern as the seat of the federal authorities. The country is situated in Western Europe,Or Central Europe depending on the definition....
.http://www.bis.org/publ/arpdf/archive/ar1939_en.pdf He was appointed to the Central Planning Board in September 1943.

Despite poor health, Funk was tried with other Nazi leaders at the Nuremberg Trials
Nuremberg Trials
The Nuremberg Trials were a series of military tribunals, held by the victorious Allied forces of World War II, most notable for the prosecution of prominent members of the political, military, and economic leadership of the defeated Nazi Germany....
. Accused of conspiracy to commit crimes against peace; planning, initiating and waging wars of aggression; war crime
War crime
War crimes are serious violations of the laws applicable in armed conflict giving rise to individual criminal responsibility...
s and crimes against humanity
Crime against humanity
Crimes against humanity, as defined by the Rome Statute of the International Criminal Court Explanatory Memorandum, "are particularly odious offenses in that they constitute a serious attack on human dignity or grave humiliation or a degradation of one or more human beings...
, he argued that, despite his titles, he had very little power in the regime. Göring described Funk as "an insignificant subordinate," but documentary evidence and his wartime biography Walther Funk, A Life for Economy were used against him during the trial, leading to his conviction on counts 2, 3 and 4 of the indictment and his sentence of life imprisonment.

Funk was held at Spandau Prison
Spandau Prison
Spandau Prison was a prison situated in the borough of Spandau in western Berlin, constructed in 1876 and demolished in 1987 after the death of its last prisoner, Rudolf Hess, to prevent it from becoming a neo-Nazi shrine. The prison was near, though not part of, the Renaissance-era Spandau Citadel...
along with other senior Nazis. He was released on 16 May 1957 because of ill health. He made a last-minute call on Rudolf Hess
Rudolf Hess
Rudolf Walter Richard Hess was a prominent Nazi politician who was Adolf Hitler's deputy in the Nazi Party during the 1930s and early 1940s...
, Albert Speer
Albert Speer
Albert Speer, born Berthold Konrad Hermann Albert Speer, was a German architect who was, for a part of World War II, Minister of Armaments and War Production for the Third Reich. Speer was Adolf Hitler's chief architect before assuming ministerial office...
and Baldur von Schirach
Baldur von Schirach
Baldur Benedikt von Schirach was a Nazi youth leader later convicted of being a war criminal. Schirach was the head of the Hitler-Jugend and Gauleiter and Reichsstatthalter of Vienna....
. He died three years later at Düsseldorf
Düsseldorf
Düsseldorf is the capital city of the German state of North Rhine-Westphalia and centre of the Rhine-Ruhr metropolitan region.Düsseldorf is an important international business and financial centre and renowned for its fashion and trade fairs. Located centrally within the European Megalopolis, the...
of diabetes.