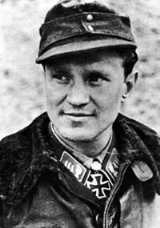 Encyclopedia
Walter ´´Graf Pinski`` Krupinski (November 11, 1920 - October 7, 2000) was a German
Germany
Germany , officially the Federal Republic of Germany , is a federal parliamentary republic in Europe. The country consists of 16 states while the capital and largest city is Berlin. Germany covers an area of 357,021 km2 and has a largely temperate seasonal climate...
Luftwaffe
Luftwaffe
Luftwaffe is a generic German term for an air force. It is also the official name for two of the four historic German air forces, the Wehrmacht air arm founded in 1935 and disbanded in 1946; and the current Bundeswehr air arm founded in 1956....
fighter ace
Fighter Ace
Fighter Ace was a massively multiplayer online computer game in which one flies World War II fighter and bomber planes in combat against other players and virtual pilots...
of World War II
World War II
World War II, or the Second World War , was a global conflict lasting from 1939 to 1945, involving most of the world's nations—including all of the great powers—eventually forming two opposing military alliances: the Allies and the Axis...
and a senior West German air force officer after the war. He was one of the highest-scoring pilots, accredited with 197 victories in 1,100 sorties. He was called by his fellow pilots Graf Pinski due to his Prussian origins. Krupinski was one of the first to fly the Me 262 jet fighter in combat as a member of the famous aces squadron JV 44
JV 44
Jagdverband 44 was a special fighter unit of top German fighter ace pilots in the Luftwaffe during the last months of World War II. The main aircraft used by the unit was the Messerschmitt Me 262 jet fighter...
led by Adolf Galland
Adolf Galland
Adolf "Dolfo" Joseph Ferdinand Galland was a German Luftwaffe General and flying ace who served throughout World War II in Europe. He flew 705 combat missions, and fought on the Western and the Defence of the Reich fronts...
.

Walter Krupinski was born on 11 November 1920, in the town of Domnau (Domnowo)  in East Prussia
East Prussia
East Prussia is the main part of the region of Prussia along the southeastern Baltic Coast from the 13th century to the end of World War II in May 1945. From 1772–1829 and 1878–1945, the Province of East Prussia was part of the German state of Prussia. The capital city was Königsberg.East Prussia...
, and grew up in Braunsberg (Braniewo)
Braniewo
Braniewo is a town in northeastern Poland, in the Warmian-Masurian Voivodeship, with a population of 18,068 . It is the capital of Braniewo County...
. Krupinski had two younger brothers, Paul and Günther. Paul joined the Kriegsmarine
Kriegsmarine
The Kriegsmarine was the name of the German Navy during the Nazi regime . It superseded the Kaiserliche Marine of World War I and the post-war Reichsmarine. The Kriegsmarine was one of three official branches of the Wehrmacht, the unified armed forces of Nazi Germany.The Kriegsmarine grew rapidly...
and entered the Unterseeboot service. He was killed in action on 11 November 1944 while serving on U-771
German submarine U-771
German submarine U-771 was a Type VIIC U-boat of the German Kriegsmarine during World War II. She was ordered on 21 November 1940, and was laid down on 21 August 1942 at Kriegsmarinewerft, Wilhelmshaven, as 'werk 154'...
, which was sunk off the Norwegian coast by HMS Venturer
HMS Venturer (P68)
HMS Venturer was a Second World War British submarine.-Construction:Venturer was the lead boat of the British V class submarine, a development of the successful U-class...
.

Krupinski entered the Luftwaffe in September 1939 as an ensign. From November 1939 to October 1940, Krupinski entered basic air training and after being assigned as a fighter pilot, the fighter school. After his training Krupinski was sent to join his new unit Jagdgeschwader 52
Jagdgeschwader 52
Jagdgeschwader 52 of the Luftwaffe, was the most successful fighter-wing of all time, with a claimed total of more than 10,000 victories over enemy aircraft during World War II. It was the unit of the top three scoring Fighter aces of all time, Erich Hartmann, Gerhard Barkhorn and Günther Rall...
, where he was placed in 6.Staffel in November 1940. He flew combat missions over England, but did not gain any successes.
Krupinski won his first aerial victory in the early stages of the Russian campaign
Operation Barbarossa
Operation Barbarossa was the code name for Germany's invasion of the Soviet Union during World War II that began on 22 June 1941. Over 4.5 million troops of the Axis powers invaded the USSR along a front., the largest invasion in the history of warfare...
. By December 1941 his tally stood at seven confirmed victories and by August 1942 at 50, for which he was awarded the German Cross
German Cross
The German Cross was instituted by Adolf Hitler on 17 November 1941 as an award ranking higher than the Iron Cross First Class but below the Knight's Cross of the Iron Cross respectively ranking higher than the War Merit Cross First Class with Swords but below the Knight's Cross of the War Merit...
in gold. After another six victories Krupinski was awarded the Knight's Cross of the Iron Cross
Knight's Cross of the Iron Cross
The Knight's Cross of the Iron Cross was a grade of the 1939 version of the 1813 created Iron Cross . The Knight's Cross of the Iron Cross was the highest award of Germany to recognize extreme battlefield bravery or successful military leadership during World War II...
. In March 1943, Krupinski was promoted to Staffelkapitän
Staffelkapitän
Staffelkapitän is a position in flying units of the German Luftwaffe that is the equivalent of RAF/USAF Squadron Commander. Usually today a Staffelkapitän is of Oberstleutnant or Major rank....
and was given command of 7.Staffel. At this time Erich Hartmann
Erich Hartmann
Erich Alfred Hartmann , nicknamed "Bubi" by his comrades and "The Black Devil" by his Soviet enemies, was a German World War II fighter pilot and is the highest-scoring fighter ace in the history of aerial warfare...
, who went on to become the highest scoring Ace of the war, served as his wingman. Hartmann adopted Krupinki's close quarters method of attack. Krupinski was awarded the Oak Leaves for his knight's cross for his 174th victory.

After achieving 177 victories, Krupinski was transferred from the Russian front
Eastern Front (World War II)
The Eastern Front of World War II was a theatre of World War II between the European Axis powers and co-belligerent Finland against the Soviet Union, Poland, and some other Allies which encompassed Northern, Southern and Eastern Europe from 22 June 1941 to 9 May 1945...
to Germany, where he was assigned to 1.Staffel of Jagdgeschwader 5
Jagdgeschwader 5
Jagdgeschwader 5 Eismeer was a Luftwaffe fighter Wing that served during World War II. As the name Eismeer implies, it was created to operate in the far North of Europe, namely Norway, Scandinavia and northern parts of Finland, all nearest the Arctic Ocean...
. Promoted to the rank of Hauptmann
Hauptmann
Hauptmann is a German word usually translated as captain when it is used as an officer's rank in the German, Austrian and Swiss armies. While "haupt" in contemporary German means "main", it also has the dated meaning of "head", i.e...
(captain) in May 1944, Krupinski was made commander of II. Gruppe of Jagdgeschwader 11
Jagdgeschwader 11
Jagdgeschwader 11 was a German fighter wing of the Luftwaffe during World War II. Its primary role was the defense of Northern Germany against Allied day bomber raids...
. After the Allied invasion of France in June 1944, the Gruppe was rushed to Normandy to operate on low-level Army support missions. Krupinski claimed 10 Allied aircraft shot down before he was wounded and burned on 12 August.
By September he was transferred as Commanding Officer of III. Gruppe, Jagdgeschwader 26
Jagdgeschwader 26
Jagdgeschwader 26 Schlageter was a Luftwaffe fighter-wing of World War II. It operated mainly in Western Europe against Great Britain, France the United States but also saw service against Russia. It was named after Albert Leo Schlageter, a World War I veteran and Freikorps member arrested and...
. In March 1945, Krupinski was transferred to the aces unit Jagdverband 44, which flew the Me 262 jet.

At 3:00 PM on 24 April 1945, Krupinski was one of four pilots to take off from Munich-Riem
Munich-Riem Airport
Munich-Riem Airport was the main, international airport of Munich until it was closed down on 16 May 1992, the day before the new airport near Freising commenced operation. It was located near the old village of Riem in the Munich borough of Trudering-Riem.-History:Construction on the airport...
to intercept a USAAF B-26 Marauder
B-26 Marauder
The Martin B-26 Marauder was a World War II twin-engine medium bomber built by the Glenn L. Martin Company. First used in the Pacific Theater in early 1942, it was also used in the Mediterranean Theater and in Western Europe....
aircraft formation. Günther Lützow
Günther Lützow
Colonel Günther Lützow was a German Luftwaffe fighter ace and a leader in the "Fighter Pilots Revolt". Lützow was credited with 110 victories achieved in over 300 combat missions. He scored 5 victories during the Spanish Civil War...
, who failed to return from this mission, led the flight of four. Lützow's fate remains unknown to this date. One of the other two pilots was Leutnant Klaus Neumann
Klaus Neumann
Klaus Neumann was a German Leutnant and recipient of the Knight's Cross of the Iron Cross during World War II. The Knight's Cross of the Iron Cross was awarded to recognise extreme battlefield bravery or successful military leadership.-World War II:Unteroffizier Neumann began his combat flying...
.

After having claimed 197 enemy planes (177 Eastern Front, 20 against the Western Allies, in about 1100 missions), Krupinski went into American captivity on May 5, 1945.
Krupinski had bailed out four times and had been wounded five times.

Released from captivity in September, by November 1952 entered the German provisional defense ministry. Given the rank of major in 1957, Krupinski went to England to lead the first post war German jet fighter wing. In 1966 Krupinski took command of the German forces of the Luftwaffen-Ausbildungs-Kommando in Texas
Texas
Texas is the second largest U.S. state by both area and population, and the largest state by area in the contiguous United States.The name, based on the Caddo word "Tejas" meaning "friends" or "allies", was applied by the Spanish to the Caddo themselves and to the region of their settlement in...
with the rank of brigadier general. In July 1969 Walter Krupinski became commander of the 3rd Luftwaffe division. In 1971 he became chief of staff of 2 ATAF. In October 1974 Krupinski was promoted commanding officer of the airfleet. Due to the Rudel Scandal
Rudel Scandal
The Rudel Scandal of 1976 was a political scandal in Germany which concerned the way the German Army dealt with the traditions of the Wehrmacht....
he was forced into early retirement on 8 November 1976 holding the rank of Lieutenant-general. Walter Krupinski died in Neunkirchen-Seelscheid
Neunkirchen-Seelscheid
Neunkirchen-Seelscheid is a municipality in the Rhein-Sieg district in the southern part of North Rhine-Westphalia, Germany. Beside the two principal places Neunkirchen and Seelscheid there are numerous smaller localities among the municipality....
in 2000.