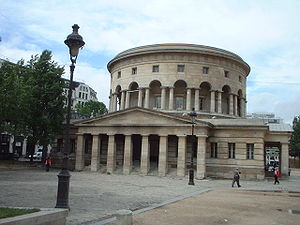 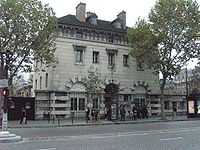 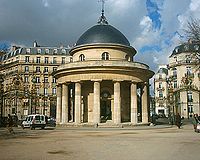 The Wall of the Farmers-General was built between 1784 and 1791 by the Ferme générale
Ferme générale
The Ferme générale was, in ancien régime France, essentially an outsourced customs and excise operation which collected duties on behalf of the king, under six-year contracts...
, the corporation of tax farmers. It was one of the several city walls of Paris
City walls of Paris
Over time, several city walls of Paris were built :* a gauloise enclosure * a Gallo-Roman wall* two medieval walls including the main one : the wall of Philippe Auguste* the wall of Charles V, extending on the right bank...
built between the early Middle Ages
Middle Ages
The Middle Ages is a periodization of European history from the 5th century to the 15th century. The Middle Ages follows the fall of the Western Roman Empire in 476 and precedes the Early Modern Era. It is the middle period of a three-period division of Western history: Classic, Medieval and Modern...
to the mid 19th century. It was 24 kilometers long and roughly followed the route now occupied by the line 2
Paris Metro Line 2
Line 2 is one of the sixteen lines of the Paris Métro rapid transit system in Paris, France. Situated almost entirely above the former city walls , it runs in a semi-circle in the north of Paris....
and line 6
Paris Metro Line 6
Line 6 is one of the sixteen lines of the Paris Métro rapid transit system. Following a semi-circular route around the southern half of the city above boulevards formed by ancient city walls , it runs from Charles de Gaulle – Étoile in the west and Nation in the east.Opened between 1900 and 1906...
of the metro
Paris Métro
The Paris Métro or Métropolitain is the rapid transit metro system in Paris, France. It has become a symbol of the city, noted for its density within the city limits and its uniform architecture influenced by Art Nouveau. The network's sixteen lines are mostly underground and run to 214 km ...
. It crossed the districts of the Place de l'Étoile
Place de l'Étoile
The Place Charles de Gaulle, , historically known as the Place de l'Étoile , is a large road junction in Paris, France, the meeting point of twelve straight avenues including the Champs-Élysées which continues to the east. It was renamed in 1970 following the death of General and President Charles...
, Batignolles
Batignolles
Batignolles is a neighborhood of Paris, a part of the 17th arrondissement of the city. The neighborhood is bounded on the south by the Boulevard des Batignolles, on the east by the Avenue de Clichy, on the north by the Rue Cardinet, and on the west by the Rue de Rome.-History:Batignolles was an...
, Pigalle
Quartier Pigalle
Pigalle is an area in Paris around the Place Pigalle, on the border between the 9th and the 18th arrondissements. It is named after the sculptor Jean-Baptiste Pigalle ....
, Belleville
Belleville, Paris
Belleville is a neighbourhood of Paris, France, parts of which lie in four different arrondissements. The major portion of Belleville straddles the borderline between the 20th arrondissement and the 19th along its main street, the Rue de Belleville...
, Nation
Place de la Nation
The place de la Nation is a square in Paris, on the border of the 11th and 12th arrondissements...
, the Place d'Italie
Place d'Italie
The Place d'Italie is a public space in the 13th arrondissement of Paris. The square has an average dimension somewhat less than 200 meters in extent , and the following streets meet there:*Boulevard Vincent-Auriol...
, Denfert-Rochereau
Place Denfert-Rochereau
Place Denfert-Rochereau, previously known as Place d'Enfer, is a public square located in the 14th arrondissement of Paris, France, in the Montparnasse district, at the intersection of the boulevards Raspail, Arago, and Saint-Jacques, and the avenues René Coty, Général Leclerc, and , as well as the...
, Montparnasse
Montparnasse
Montparnasse is an area of Paris, France, on the left bank of the river Seine, centred at the crossroads of the Boulevard du Montparnasse and the Rue de Rennes, between the Rue de Rennes and boulevard Raspail...
and the Trocadéro
Trocadéro
The Trocadéro, , site of the Palais de Chaillot, , is an area of Paris, France, in the 16th arrondissement, across the Seine from the Eiffel Tower. The hill of the Trocadéro is the hill of Chaillot, a former village.- Origin of the name :...
.

Unlike earlier walls, the Farmers-General Wall was not aimed at defending Paris from invaders but intended to ensure the payment of a toll on goods entering Paris ("octroi
Octroi
Octroi is a local tax collected on various articles brought into a district for consumption.-Antiquity:Octroi taxes have a respectable antiquity, being known in Roman times as vectigalia...
") to the Ferme générale. The wall's tax-collection function made it very unpopular, it was said, "Le mur murant Paris rend Paris murmurant" ("The wall walling Paris keeps Paris murmuring". There was also an epigram:

The architect Claude Nicolas Ledoux
Claude Nicolas Ledoux
Claude-Nicolas Ledoux was one of the earliest exponents of French Neoclassical architecture. He used his knowledge of architectural theory to design not only in domestic architecture but town planning; as a consequence of his visionary plan for the Ideal City of Chaux, he became known as a utopian...
designed its 62 toll barriers in a neo-classic or even classical style. The architectural value of these buildings, "dens of the Tax Department metamorphosed into palaces with columns" according to Louis-Sebastien Mercier
Louis-Sébastien Mercier
Louis-Sébastien Mercier was a French dramatist and writer.-Early life and education:He was born in Paris to a humble family: his father was a skilled artisan who polished swords and metal arms. Mercier nevertheless received a decent education.-Literary career:Mercier began his literary career by...
, highlighted the oppression which the wall represented for Parisians. The wall was bordered by a boulevard outside and a chemin de ronde
Chemin de ronde
A chemin de ronde — also called an allure or, more prosaically, a wall-walk — is a raised, protected walkway behind a castle battlement....
(a raised protected walkway) inside, except between the barrière d'Italie (now the Place d'Italie
Place d'Italie
The Place d'Italie is a public space in the 13th arrondissement of Paris. The square has an average dimension somewhat less than 200 meters in extent , and the following streets meet there:*Boulevard Vincent-Auriol...
) and the barrière d'Enfer (now the Place Denfert-Rochereau
Place Denfert-Rochereau
Place Denfert-Rochereau, previously known as Place d'Enfer, is a public square located in the 14th arrondissement of Paris, France, in the Montparnasse district, at the intersection of the boulevards Raspail, Arago, and Saint-Jacques, and the avenues René Coty, Général Leclerc, and , as well as the...
) where the Boulevards of Gobelins, Saint-Jacques and d'Enfer replaced the chemin de ronde inside the wall.

In 1787, Loménie de Brienne, Minister for Finance, worried about the very high cost of the work and considered stopping construction but never actually stopped it because the work was too far advanced.

The toll on goods was removed on 1 May 1791 in the early stages of the French Revolution
French Revolution
The French Revolution , sometimes distinguished as the 'Great French Revolution' , was a period of radical social and political upheaval in France and Europe. The absolute monarchy that had ruled France for centuries collapsed in three years...
, but was restored in 1798 by the Directory
French Directory
The Directory was a body of five Directors that held executive power in France following the Convention and preceding the Consulate...
. The perception of the tolls improved under Napoleon
Napoleon I
Napoleon Bonaparte was a French military and political leader during the latter stages of the French Revolution.As Napoleon I, he was Emperor of the French from 1804 to 1815...
. The majority of the toll barriers were destroyed during the expansion of Paris in 1860. At the same time the octroi that had been collected at the wall was abolished.

Some portions of the wall still exist, such as the rotunda of the Barrier of La Villette (now Place de Stalingrad), the Barrière du Trône (now Place de la Nation
Place de la Nation
The place de la Nation is a square in Paris, on the border of the 11th and 12th arrondissements...
), the Barrière d'Enfer (now Place Denfert-Rochereau
Place Denfert-Rochereau
Place Denfert-Rochereau, previously known as Place d'Enfer, is a public square located in the 14th arrondissement of Paris, France, in the Montparnasse district, at the intersection of the boulevards Raspail, Arago, and Saint-Jacques, and the avenues René Coty, Général Leclerc, and , as well as the...
), and the rotunda of Parc Monceau
Parc Monceau
Parc Monceau is a semi-public park situated in the 8th arrondissement of Paris, France, at the junction of Boulevard de Courcelles, Rue de Prony and Rue Georges Berger. At the main entrance is a rotunda. The park covers an area of 8.2 hectares ....
. The wall itself was replaced by the route of the following streets:
The source of this article is wikipedia, the free encyclopedia.  The text of this article is licensed under the GFDL.