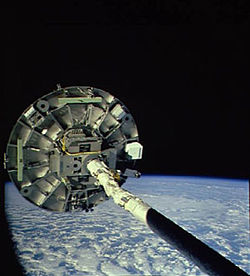 ]
Wake Shield Facility is an experimental science platform that was placed in low-earth orbit
Low Earth orbit
A low Earth orbit is generally defined as an orbit within the locus extending from the Earth’s surface up to an altitude of 2,000 km...
by the Space Shuttle
Space Shuttle
The Space Shuttle was a manned orbital rocket and spacecraft system operated by NASA on 135 missions from 1981 to 2011. The system combined rocket launch, orbital spacecraft, and re-entry spaceplane with modular add-ons...
. It is a 3.7 meter (12 ft) diameter, free-flying stainless steel
Stainless steel
In metallurgy, stainless steel, also known as inox steel or inox from French "inoxydable", is defined as a steel alloy with a minimum of 10.5 or 11% chromium content by mass....
disk.

The WSF is deployed in the wake of the Space Shuttle at an orbital altitude of over 300 kilometers (186 mi), within the thermosphere
Thermosphere
The thermosphere is the biggest of all the layers of the Earth's atmosphere directly above the mesosphere and directly below the exosphere. Within this layer, ultraviolet radiation causes ionization. The International Space Station has a stable orbit within the middle of the thermosphere, between...
, where the atmosphere is exceedingly tenuous. The forward edge of the WSF disk redirects atmospheric and other particles around the sides, leaving an "ultra-vacuum" in its wake. The resulting vacuum is used to study epitaxial film growth.

The WSF has flown into space three times, on board shuttle flights STS-60
STS-60
STS-60 was the first mission of the US/Russian Shuttle-Mir Program, which carried Sergei K. Krikalev, the first Russian cosmonaut to fly aboard a Space Shuttle. The mission used Space Shuttle Discovery, which lifted off from Launch Pad 39A on 3 February 1994 from Kennedy Space Center, Florida...
, STS-69
STS-69
STS-69 was a Space Shuttle Endeavour mission, and the second flight of the Wake Shield Facility . The mission launched from Kennedy Space Center, Florida on 7 September 1995.-Crew:-Mission parameters:*Mass: payload*Perigee:...
and STS-80
STS-80
-Mission parameters:* Mass: payload* Perigee: * Apogee: * Inclination: 28.5°* Period: 91.5 min-Mission highlights:* The mission deployed two satellites and successfully recovered them after they had performed their tasks....
. During STS-60, some hardware issues were experienced and as a result the WSF was only deployed at the end of the shuttle's robotic arm. During the later missions the WSF was deployed as a free-flying platform in the wake of the shuttle.

These flights proved the vacuum wake concept, and realized the space epitaxy
Epitaxy
Epitaxy refers to the deposition of a crystalline overlayer on a crystalline substrate, where the overlayer is in registry with the substrate. In other words, there must be one or more preferred orientations of the overlayer with respect to the substrate for this to be termed epitaxial growth. The...
concept by growing the first-ever crystalline semiconductor thin films in the vacuum of space http://www.sciencedirect.com/science?_ob=ArticleURL&_udi=B6V1N-42GDGKN-9&_user=10&_origUdi=B6TW4-44D2CDR-5&_fmt=high&_coverDate=01%2F02%2F2001&_rdoc=1&_orig=article&_acct=C000050221&_version=1&_urlVersion=0&_userid=10&md5=e30617536478ffd83bda0a133828e63a. These included gallium arsenide (GaAs) and aluminum gallium arsenide (AlGaAs) depositions. These experiments have been used to develop better photocells and thin films http://www.sciencedirect.com/science?_ob=ArticleURL&_udi=B6TJ6-3YF9X43-1G&_user=10&_coverDate=02%2F29%2F2000&_alid=922552806&_rdoc=1&_fmt=high&_orig=mlkt&_cdi=5302&_sort=v&_st=17&_docanchor=&view=c&_ct=24&_acct=C000050221&_version=1&_urlVersion=0&_userid=10&md5=741571820de7edcf76644e030db89b85. Among the potential resulting applications are artificial retinas made from tiny ceramic
Ceramic
A ceramic is an inorganic, nonmetallic solid prepared by the action of heat and subsequent cooling. Ceramic materials may have a crystalline or partly crystalline structure, or may be amorphous...
detectors.

Pre-flight calculations suggested that the pressure on the wake side could be decreased by some 6 orders of magnitude over the ambient pressure in low earth orbit (from 10−8 to 10−14 Torr). Analysis of the pressure and temperature data gathered from the two flights concluded that the decrease was some 2 orders of magnitude or 4 orders of magnitude less than expected http://www.sciencedirect.com/science?_ob=ArticleURL&_udi=B6TW4-44D2CDR-5&_user=10&_rdoc=1&_fmt=&_orig=search&_sort=d&view=c&_acct=C000050221&_version=1&_urlVersion=0&_userid=10&md5=4850910b821748d877dc7963cb459fb8.

The Wake Shield is sponsored by the Space Processing Division in NASA
NASA
The National Aeronautics and Space Administration is the agency of the United States government that is responsible for the nation's civilian space program and for aeronautics and aerospace research...
's Office of Life and Microgravity Sciences and Applications. Wake Shield was designed, built and is operated by the Center for Advanced Materials (formerly Space Vacuum Epitaxy Center
Space Vacuum Epitaxy Center
Space Vacuum Epitaxy Center is the of laboratory space in 3 buildings on the University of Houston campus. The SVEC facilities contains equipment dedicated to thin film deposition, processing and characterization of III-V compound semiconductor, high temperature superconductor and ferroelectric...
) at the University of Houston
University of Houston
The University of Houston is a state research university, and is the flagship institution of the University of Houston System. Founded in 1927, it is Texas's third-largest university with nearly 40,000 students. Its campus spans 667 acres in southeast Houston, and was known as University of...
—a NASA Commercial Space Center—in conjunction with its industrial partner, Space Industries, Inc.
Space Industries Incorporated
Space Industries Incorporated was a company formed in the 1980s for the purpose of building a privately owned space station, which was to be called the Industrial Space Facility...
, also in Houston.