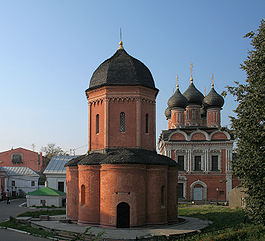 Vysokopetrovsky Monastery (Russian: Высокопетровский монастырь, English: High Monastery of St Peter) is a Russian Orthodox monastery
Monastery
Monastery denotes the building, or complex of buildings, that houses a room reserved for prayer as well as the domestic quarters and workplace of monastics, whether monks or nuns, and whether living in community or alone .Monasteries may vary greatly in size – a small dwelling accommodating only...
in the Bely Gorod
Bely Gorod
Bely Gorod is the central core area of Moscow, Russia. The name comes from the color of its defensive wall, which was erected in 1585-1593 at the behest of tsar Feodor I and Boris Godunov by architect Fyodor Kon...
of Moscow
Moscow
Moscow is the capital, the most populous city, and the most populous federal subject of Russia. The city is a major political, economic, cultural, scientific, religious, financial, educational, and transportation centre of Russia and the continent...
commanding a hill whence Petrovka Street
Petrovka Street
Petrovka Street is a street in Moscow, Russia, that runs north from Kuznetsky Most and Theatral Square up past Strastnoy Boulevard and Petrovsky Boulevard....
descends towards the Kremlin.

The monastery is believed to have been founded in the 1320s by Saint Peter of Moscow
Metropolitan Peter
Saint Peter, Metropolitan of Moscow and all Russia was the Russian metropolitan who moved his see from Vladimir to Moscow in 1325. Later he was proclaimed a patron saint of Moscow. In spite of the move, the office remained officially entitled "Metropolitan of Kiev and All Rus'" until the...
, the first Russian metropolitan to move his see in Moscow. The cloister gave its name to adjacent Petrovka Street, one of the streets radiating from Red Square
Red Square
Red Square is a city square in Moscow, Russia. The square separates the Kremlin, the former royal citadel and currently the official residence of the President of Russia, from a historic merchant quarter known as Kitai-gorod...
.

In the late 17th century, the Naryshkin
Naryshkin
Naryshkin is a Russian surname and may refer to:* Members of the Naryshkin family* Sergey Naryshkin , a politician* Two men of the name Kirill Naryshkin...
boyars, maternal relatives of Peter the Great, turned the monastery into their family burial place. They had it reconstructed in the Naryshkin Baroque
Naryshkin Baroque
Naryshkin Baroque, also called Moscow Baroque, or Muscovite Baroque, is the name given to a particular style of Baroque architecture and decoration which was fashionable in Moscow from the turn of the 17th into the early 18th centuries.-Style:...
style of architecture associated with their name. In the mid-18th century, several subsidiary structures were added, conceivably to designs by Dmitry Ukhtomsky
Dmitry Ukhtomsky
Prince Dmitry Vasilyevich Ukhtomsky, Дмитрий Васильевич Ухтомский was the chief architect of Moscow, Russia during the reign of Empress Elizabeth.-Biography:...
or Ivan Fyodorovich Michurin
Ivan Fyodorovich Michurin
Ivan Fyodorovich Michurin was a Russian architect whose designs marked a transition of Russian architecture from early Muscovite Baroque to mature Rastrelliesque style....
. 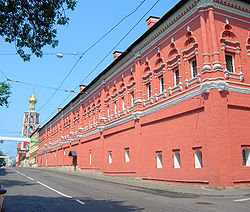