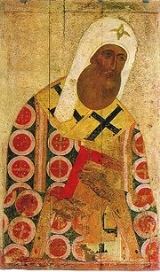 Peter's alliance with Moscow helped assert his own authority and contributed to the rise of the House of Moscow. Peter transferred his metropolitan duties from depopulated Kiev to Vladimir and then to Moscow, where he received property estates. The move strengthened the political position of Moscow and established it as the spiritual capital of fragmented Russia.

After Peter's move to Moscow, the Cathedral of the Dormition
Cathedral of the Dormition
The Cathedral of the Dormition is a Russian Orthodox church dedicated to the Dormition of the Theotokos. It is located on the north side of Cathedral Square of the Moscow Kremlin in Russia, where a narrow alley separates the north from the Patriarch's Palace with the Twelve Apostles Church....
and several other stone churches were built by Ivan Kalita in the Moscow Kremlin
Moscow Kremlin
The Moscow Kremlin , sometimes referred to as simply The Kremlin, is a historic fortified complex at the heart of Moscow, overlooking the Moskva River , Saint Basil's Cathedral and Red Square and the Alexander Garden...
. The foundation of the Vysokopetrovsky Monastery
Vysokopetrovsky Monastery
Vysokopetrovsky Monastery is a Russian Orthodox monastery in the Bely Gorod of Moscow commanding a hill whence Petrovka Street descends towards the Kremlin....
in Moscow is ascribed to Peter. He also authored a few sermon
Sermon
A sermon is an oration by a prophet or member of the clergy. Sermons address a Biblical, theological, religious, or moral topic, usually expounding on a type of belief, law or behavior within both past and present contexts...
s and epistle
Epistle
An epistle is a writing directed or sent to a person or group of people, usually an elegant and formal didactic letter. The epistle genre of letter-writing was common in ancient Egypt as part of the scribal-school writing curriculum. The letters in the New Testament from Apostles to Christians...
s. He is credited with painting a wonderworking icon
Icon
An icon is a religious work of art, most commonly a painting, from Eastern Christianity and in certain Eastern Catholic churches...
of the Theotokos
Theotokos
Theotokos is the Greek title of Mary, the mother of Jesus used especially in the Eastern Orthodox, Oriental Orthodox, and Eastern Catholic Churches. Its literal English translations include God-bearer and the one who gives birth to God. Less literal translations include Mother of God...
known as the Icon of the Mother of God of St Peter of Moscow (commemorated on August 24).

After his canonization
Canonization
Canonization is the act by which a Christian church declares a deceased person to be a saint, upon which declaration the person is included in the canon, or list, of recognized saints. Originally, individuals were recognized as saints without any formal process...
by Metropolitan Alexis, his veneration was propagated all over Moscovy. Accordingly, many churches were dedicated to Peter the Metropolitan in Moscow and other cities of Russia. His feast day is celebrated on August 24 (the translation
Translation (relics)
In Christianity, the translation of relics is the removal of holy objects from one locality to another ; usually only the movement of the remains of the saint's body would be treated so formally, with secondary relics such as items of clothing treated with less ceremony...
of his relic
Relic
In religion, a relic is a part of the body of a saint or a venerated person, or else another type of ancient religious object, carefully preserved for purposes of veneration or as a tangible memorial...
s to the Dormition Cathedral in Moscow) and October 5 (in common with Metropolitans Jonah and Alexis
Alexius, Metropolitan of Moscow
Saint Alexius was Metropolitan of Kiev and all Russia , and presided over the Moscow government during Dmitrii Donskoi's minority....
)