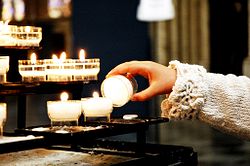 A votive candle or prayer candle is a small candle
Candle
A candle is a solid block or cylinder of wax with an embedded wick, which is lit to provide light, and sometimes heat.Today, most candles are made from paraffin. Candles can also be made from beeswax, soy, other plant waxes, and tallow...
, typically white or beeswax yellow, intended to be burnt as a votive offering
Votive offering
A votive deposit or votive offering is one or more objects displayed or deposited, without the intention of recovery or use, in a sacred place for broadly religious purposes. Such items are a feature of modern and ancient societies and are generally made in order to gain favor with supernatural...
in a religious ceremony
Ceremony
A ceremony is an event of ritual significance, performed on a special occasion. The word may be of Etruscan origin.-Ceremonial occasions:A ceremony may mark a rite of passage in a human life, marking the significance of, for example:* birth...
. It now also refers to a standard size of candle two inches high by one and a half inches diameter, of any color or scent.

Candles are lit for prayer intention
Intention
Intention is an agent's specific purpose in performing an action or series of actions, the end or goal that is aimed at. Outcomes that are unanticipated or unforeseen are known as unintended consequences....
s. To "light a candle for someone" indicates one's intention to say a prayer for another person, and the candle symbolizes that prayer. A donation box intended to defer candle costs generally accompanies votive candles. In some churches, the donation is considered a mandatory contribution in exchange for lighting a candle.

In the Eastern Orthodox Church, candles are lit before icon
Icon
An icon is a religious work of art, most commonly a painting, from Eastern Christianity and in certain Eastern Catholic churches...
s, usually of Jesus Christ or the Holy Theotokos
Theotokos
Theotokos is the Greek title of Mary, the mother of Jesus used especially in the Eastern Orthodox, Oriental Orthodox, and Eastern Catholic Churches. Its literal English translations include God-bearer and the one who gives birth to God. Less literal translations include Mother of God...
. Usually Orthodox churches only use long, thin candles. These are usually placed in round containers, having either various sockets to hold the candles, or in a container filled with sand, in which the worshippers place their candles. Orthodox churches will usually have a separate place to put candles lit for the departed; Roman Catholic churches make no such distinction.

Some Anglican
Anglicanism
Anglicanism is a tradition within Christianity comprising churches with historical connections to the Church of England or similar beliefs, worship and church structures. The word Anglican originates in ecclesia anglicana, a medieval Latin phrase dating to at least 1246 that means the English...
churches (typically High Anglican
High church
The term "High Church" refers to beliefs and practices of ecclesiology, liturgy and theology, generally with an emphasis on formality, and resistance to "modernization." Although used in connection with various Christian traditions, the term has traditionally been principally associated with the...
churches) also have votive candles for purposes similar to that of the Roman Catholic Church. They use the candles to pray for the dead as well as to ask for saintly intercession.

Although typically a Catholic
Catholic
The word catholic comes from the Greek phrase , meaning "on the whole," "according to the whole" or "in general", and is a combination of the Greek words meaning "about" and meaning "whole"...
practice, votive candles are used in High Church
High church
The term "High Church" refers to beliefs and practices of ecclesiology, liturgy and theology, generally with an emphasis on formality, and resistance to "modernization." Although used in connection with various Christian traditions, the term has traditionally been principally associated with the...
and Evangelical Catholic forms of Protestantism.

Lutheran churches may use votive candles which may be lit at home or at the church. They are usually lit on altar racks, altar rails, or in front of a cross. They also may be lit during the Liturgy of Good Friday
Good Friday
Good Friday , is a religious holiday observed primarily by Christians commemorating the crucifixion of Jesus Christ and his death at Calvary. The holiday is observed during Holy Week as part of the Paschal Triduum on the Friday preceding Easter Sunday, and may coincide with the Jewish observance of...
.

In the United Methodist Church
United Methodist Church
The United Methodist Church is a Methodist Christian denomination which is both mainline Protestant and evangelical. Founded in 1968 by the union of The Methodist Church and the Evangelical United Brethren Church, the UMC traces its roots back to the revival movement of John and Charles Wesley...
of the High Church
High church
The term "High Church" refers to beliefs and practices of ecclesiology, liturgy and theology, generally with an emphasis on formality, and resistance to "modernization." Although used in connection with various Christian traditions, the term has traditionally been principally associated with the...
tradition, during the liturgical celebration of All Saint's Day, votive candles are lit and a prayer is said with each candle for each person of the congregation who has died that year. Methodism does not practice intercessory prayers of the saints, and uses the votive candles to pray directly to God.

Burning a votive candle as a prayer for someone or some situation, is also often used as a ritual in India. At the river the Ganges people often offer votive candles.