Encyclopedia
Vomero is a central district of Naples
Naples
Naples is a city in Southern Italy, situated on the country's west coast by the Gulf of Naples. Lying between two notable volcanic regions, Mount Vesuvius and the Phlegraean Fields, it is the capital of the region of Campania and of the province of Naples...
, with a population of about 48,000. 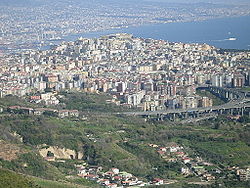 Vomero is a hilly and heavily urbanized area in the center of Naples. To the north, Vomero borders the quarter of Arenella
Arenella
Arenella is a neighbourhood of Naples, southern Italy. It is on the Vomero hill above the city and was, at approximately 300 meters in elevation, many years ago considered a place to go to "get away from it all." It is adjacent to the main hospital section of the city, set somewhat higher, on...
, to the west; Soccavo
Soccavo
thumb|250px|Urban sprawl in Soccavo.Soccavo is a western suburb of Naples, with a population of about 48,000.-Geography:Soccavo is bounded on one side by the area of Fuorigrotta and on the other by the Camaldoli hill...
and Fuorigrotta
Fuorigrotta
Fuorigrotta is a western suburb of Naples, southern Italy.-Geography:It lies beyond the Posillipo hill and has been joined to the main body of Naples by two traffic tunnels through that hill since the early 20th century....
, to the south; Chiaia
Chiaia
Chiaia is a neighbourhood on the seaside in Naples, bounded by Piazza Vittoria on the east and Mergellina on the west. The most prominent landmark in the area is the large public park known as the Villa Comunale...
, to the east; Montecalvario
Montecalvario
Montecalvario is a neighbourhood of Naples, southern Italy. The area centers roughly on the square called Piazza Carità and the metal monument to Salvo d'Acquisto at the northern end of the Spanish Quarters of the city; the area stretches along the main downtown street, via Toledo , to include a...
and to the north east; Avvocata
Avvocata
Avvocata is a neighbourhood of Naples, southern Italy. It is just outside, to the west, of the original historic center of the Greco-Roman city of Naples...
.

The name probably derives from its ancient agricultural function and from the word "vomere" (ploughshare). Due to the field work done here, the area for centuries was nicknamed "Hill of Broccolis".

Nowadays Vomero is a residential zone that has conserved little from this rural past. Since the beginning of the 20th century the area has had a dramatic increase in residential housing. During this period, numerous dwellings were built around Villa Floridiana
Villa Floridiana
The Villa Floridiana is a large park in the Vomero quarert in Naples, southern Italy. It is overlooks the western Neapolitan suburbs of Chiaia and Mergellina....
, Castel Sant'Elmo and San Martino
Certosa di San Martino
The Certosa di San Martino is a former monastery complex, now a museum, in Naples, southern Italy. It is the most visible landmark of the city, perched atop the Vomero hill that commands the gulf. A Carthusian monastery, it was finished and inaugurated under the rule of Queen Joan I in 1368. It...
, including villas in the late Art Nouveau
Art Nouveau
Art Nouveau is an international philosophy and style of art, architecture and applied art—especially the decorative arts—that were most popular during 1890–1910. The name "Art Nouveau" is French for "new art"...
style and large apartment houses for the upper middle class. Nevertheless, there are still historic buildings near the above-named monuments, such as the Villa del Pontano and an old building of the Bourbon
House of Bourbon
The House of Bourbon is a European royal house, a branch of the Capetian dynasty . Bourbon kings first ruled Navarre and France in the 16th century. By the 18th century, members of the Bourbon dynasty also held thrones in Spain, Naples, Sicily, and Parma...
customs office. Both are situated in the neighbourhood of Antignano
Antignano
Antignano is a comune in the Province of Asti in the Italian region Piedmont, located about 40 km southeast of Turin and about 8 km southwest of Asti...
, one of the most popular and oldest of Vomero. After the Second World War the quarter began to expand to the hill of Camaldoli
Hermitage of Camaldoli
The Camaldolese Hermitage of Monte Giove is a monastery near Naples, Campania, Italy.One of the monasteries still active in the region, it sits on the hill in back of Naples at the highest point in the city, between Vesuvius and the Phlegrean Fields. It was built in 1585 by the Camaldolese...
.

The new underground train system
Metropolitana di Napoli
Metropolitana di Napoli is the metro system serving the city of Naples, Italy. The system includes three underground rapid transit lines and commuter railways , with planned upgrading and expansion work underway...
has contributed to speed up the public transport system and to ease traffic congestion in the last few years. It now connects Vomero with the city centre and the northern suburban quarters.