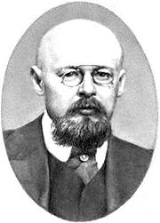 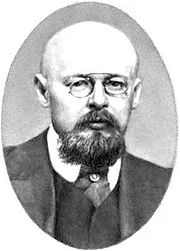 Vladimir Mitrofanovich Purishkevich (August 12, 1870, Kishinev – February 1, 1920, Novorossiysk
Novorossiysk
Novorossiysk is a city in Krasnodar Krai, Russia. It is the country's main port on the Black Sea and the leading Russian port for importing grain. It is one of the few cities honored with the title of the Hero City. Population: -History:...
, Russia), was a Russian politician before the Bolshevik revolution
October Revolution
The October Revolution , also known as the Great October Socialist Revolution , Red October, the October Uprising or the Bolshevik Revolution, was a political revolution and a part of the Russian Revolution of 1917...
, noted for his monarchist and antisemitic views. He was also a significant proponent of the Blood Libel.

Born in a family of a poor nobleman in Bessarabia
Bessarabia
Bessarabia is a historical term for the geographic region in Eastern Europe bounded by the Dniester River on the east and the Prut River on the west....
Purishkevich graduated from Odessa
Odessa
Odessa or Odesa is the administrative center of the Odessa Oblast located in southern Ukraine. The city is a major seaport located on the northwest shore of the Black Sea and the fourth largest city in Ukraine with a population of 1,029,000 .The predecessor of Odessa, a small Tatar settlement,...
university with a degree in philosophy. Purishkevich was a far-rightist who in 1905 was one of the founders of the Union of the Russian People
Union of the Russian People
The Union of Russian People — a loyalist right-wing nationalist party, the most important among Black-Hundredist monarchist and antisemitic political organizations in the Russian Empire of 1905–1917....
, and deputy chairman of the Union. Later after a split within the organization in 1908 he founded his own organization known as Union of Archangel Michael.

During the Russian Revolution of 1905
Russian Revolution of 1905
The 1905 Russian Revolution was a wave of mass political and social unrest that spread through vast areas of the Russian Empire. Some of it was directed against the government, while some was undirected. It included worker strikes, peasant unrest, and military mutinies...
he organized Black Hundreds militia (officially to aid the police in the fight against left-wing extremists and the restoration of order), noted for its participation in numerous pogrom
Pogrom
A pogrom is a form of violent riot, a mob attack directed against a minority group, and characterized by killings and destruction of their homes and properties, businesses, and religious centres...
s.

Purishkevich was elected as a deputee into II, III and IV Russian State Duma
State Duma
The State Duma , common abbreviation: Госду́ма ) in the Russian Federation is the lower house of the Federal Assembly of Russia , the upper house being the Federation Council of Russia. The Duma headquarters is located in central Moscow, a few steps from Manege Square. Its members are referred to...
, where he became a notorious leader of the radical monarchist right and gained fame because of his emotional speeches, flamboyant and scandalous behaviour, and his monarchist and anti-Semitic views. During World War I
World War I
World War I , which was predominantly called the World War or the Great War from its occurrence until 1939, and the First World War or World War I thereafter, was a major war centred in Europe that began on 28 July 1914 and lasted until 11 November 1918...
Purishkevich quit politics and was put in charge of a medical aid train on the front.

In 1916, together with Prince Felix Felixovich Yusupov
Felix Yusupov
Prince Felix Felixovich Yusupov, Count Sumarokov-Elston , was best known for participating in the murder of Grigori Rasputin, the faith healer who was said to have influenced decisions of Tsar Nicholas II and Tsaritsa Alexandra Feodorovna.-Biography:...
and Grand Duke Dmitri Pavlovich, Purishkevich participated in the assassination of Grigori Rasputin
Grigori Rasputin
Grigori Yefimovich Rasputin was a Russian Orthodox Christian and mystic who is perceived as having influenced the latter days of the Russian Emperor Nicholas II, his wife Alexandra, and their only son Alexei...
, an unsuccessful attempt to save the institution of monarchy. After the February Revolution
February Revolution
The February Revolution of 1917 was the first of two revolutions in Russia in 1917. Centered around the then capital Petrograd in March . Its immediate result was the abdication of Tsar Nicholas II, the end of the Romanov dynasty, and the end of the Russian Empire...
in 1917, he called for the abolition of the Soviets
Soviet (council)
Soviet was a name used for several Russian political organizations. Examples include the Czar's Council of Ministers, which was called the “Soviet of Ministers”; a workers' local council in late Imperial Russia; and the Supreme Soviet of the Soviet Union....
. In October, he organized the "Committee for the Motherland's Salvation" in St. Petersburg
Saint Petersburg
Saint Petersburg is a city and a federal subject of Russia located on the Neva River at the head of the Gulf of Finland on the Baltic Sea...
, and was joined by a number of officers, military cadets and others.

In November 1917, Purishkevich was arrested by the Red Guards
Red Guards (Russia)
In the context of the history of Russia and Soviet Union, Red Guards were paramilitary formations consisting of workers and partially of soldiers and sailors formed in the time frame of the Russian Revolution of 1917...
for his participation in a counterrevolutionary conspiracy, after the discovery of a letter sent by him to General Kaledin
Aleksei Maksimovich Kaledin
Alexei Maximovich Kaledin was a Russian Full General of Cavalry who led the Don Cossack White movement in the opening stages of the Russian Civil War.-Biography:...
in which he urged the Cossack leader to come and restore order in Petrograd and he became the first person to be tried by the first Revolutionary Tribunal. At the time Purishkevich had a false passport under the surname "Yevreinov". He was condemned to four years of imprisonment with obligatory community service, but was amnestied the following May 1, on the condition of a promise to refrain from any political activity. After his release Purishkevich immediately moved to the Southern Russia, controlled by the White Army. There he published the monarchist journal "Blagovest". In 1920 Vladimir Purishkevich died from typhus
Typhus
Epidemic typhus is a form of typhus so named because the disease often causes epidemics following wars and natural disasters...
in Novorossiysk
Novorossiysk
Novorossiysk is a city in Krasnodar Krai, Russia. It is the country's main port on the Black Sea and the leading Russian port for importing grain. It is one of the few cities honored with the title of the Hero City. Population: -History:...
.