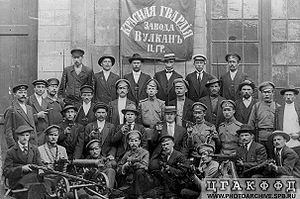 In the context of the history of Russia
Russia
Russia or , officially known as both Russia and the Russian Federation , is a country in northern Eurasia. It is a federal semi-presidential republic, comprising 83 federal subjects...
and Soviet Union
Soviet Union
The Soviet Union , officially the Union of Soviet Socialist Republics , was a constitutionally socialist state that existed in Eurasia between 1922 and 1991....
, Red Guards (Russian: "Красная Гвардия") were paramilitary
Paramilitary
A paramilitary is a force whose function and organization are similar to those of a professional military, but which is not considered part of a state's formal armed forces....
formations consisting of workers and partially of soldiers and sailors formed in the time frame of the Russian Revolution of 1917
Russian Revolution of 1917
The Russian Revolution is the collective term for a series of revolutions in Russia in 1917, which destroyed the Tsarist autocracy and led to the creation of the Soviet Union. The Tsar was deposed and replaced by a provisional government in the first revolution of February 1917...
. Composing the majority of the urban population where Bolsheviks had the strongest support, they were the main strike force of the Bolsheviks in the revolution and the following civil war. Red Guard units were created in March 1917, under the control of Bolsheviks at industrial enterprises by Factory and Plant Committees and by Bolshevik party cells. A number of other militarized formations created during the February Revolution
February Revolution
The February Revolution of 1917 was the first of two revolutions in Russia in 1917. Centered around the then capital Petrograd in March . Its immediate result was the abdication of Tsar Nicholas II, the end of the Romanov dynasty, and the end of the Russian Empire...
, such as "people's militia" (народная милиция), created by the Russian Provisional Government, "groups of self-defence" (отряды самообороны), "committees of public security" (комитеты общественной безопасности), "workers' squads" (рабочие дружины) were gradually unified into the Red Guards.

During the revolution, training of the Red Guards was arranged by the Military Organization of the RSDLP.

Enlistment was voluntary, but required recommendations from Soviet
Soviet (council)
Soviet was a name used for several Russian political organizations. Examples include the Czar's Council of Ministers, which was called the “Soviet of Ministers”; a workers' local council in late Imperial Russia; and the Supreme Soviet of the Soviet Union....
s, Bolshevik party units or other public organizations. The military training of workers was often performed without disengagement from the work at plants. There were both infantry and mounted regiments. At different places the organization was nonuniform in terms of subordination, head count, degree of military training. This state was often called "half-partisan
Partisan (military)
A partisan is a member of an irregular military force formed to oppose control of an area by a foreign power or by an army of occupation by some kind of insurgent activity...
". While successful at local conflicts (e.g., with ataman
Ataman
Ataman was a commander title of the Ukrainian People's Army, Cossack, and haidamak leaders, who were in essence the Cossacks...
Alexander Dutov
Alexander Dutov
Alexander Ilyich Dutov , one of the leaders of the Cossack counterrevolution in the Urals, Lieutenant General .Dutov was born in Kazalinsk...
in Orenburg
Orenburg
Orenburg is a city on the Ural River and the administrative center of Orenburg Oblast, Russia. It lies southeast of Moscow, very close to the border with Kazakhstan. Population: 546,987 ; 549,361 ; Highest point: 154.4 m...
guberniya
Guberniya
A guberniya was a major administrative subdivision of the Russian Empire usually translated as government, governorate, or province. Such administrative division was preserved for sometime upon the collapse of the empire in 1917. A guberniya was ruled by a governor , a word borrowed from Latin ,...
), this loose organization was inefficient when combating larger, organized forces of the White Army. Therefore when the creation of the Red Army was decreed, Red Guards had become the Army Reserve and the base for the formation of regular military detachments.
The source of this article is wikipedia, the free encyclopedia.  The text of this article is licensed under the GFDL.