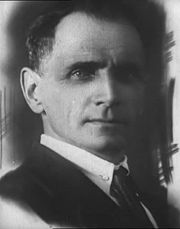 Vladimir Klavdiyevich Arsenyev (10 September 1872 – 4 September 1930) was a Russian explorer of the Far East
Far East
The Far East is an English term mostly describing East Asia and Southeast Asia, with South Asia sometimes also included for economic and cultural reasons.The term came into use in European geopolitical discourse in the 19th century,...
who recounted his travels in a series of books - "По Уссурийскому Краю" ("Along the Ussury land") (1921) and "Дерсу Узала" ("Dersu Uzala") (1923) - telling of his military journeys to the Ussuri basin with Dersu Uzala
Dersu Uzala
Dersu Uzala is the title of a 1923 book by the Russian explorer Vladimir Arsenyev.-Plot:Arsenyev's book tells of his travels in the Ussuri basin in the Russian Far East. Dersu was the name of a Nanai hunter who acted as a guide for Arsenyev's surveying crew from 1902 to 1907, and saved them from...
, a native hunter, from 1902 to 1907. He was the first to describe numerous species of Siberia
Siberia
Siberia is an extensive region constituting almost all of Northern Asia. Comprising the central and eastern portion of the Russian Federation, it was part of the Soviet Union from its beginning, as its predecessor states, the Tsardom of Russia and the Russian Empire, conquered it during the 16th...
n flora and lifestyle of native ethnic people.

Arseniev was born in St. Petersburg, Russia. His father, born a serf, became the chief of the Moscow District Railway. After a military education, Arseniev began his expeditions to the forests of the Far East. He lived in Vladivostok
Vladivostok
The city is located in the southern extremity of Muravyov-Amursky Peninsula, which is about 30 km long and approximately 12 km wide.The highest point is Mount Kholodilnik, the height of which is 257 m...
through the years of the Russian Civil War
Russian Civil War
The Russian Civil War was a multi-party war that occurred within the former Russian Empire after the Russian provisional government collapsed to the Soviets, under the domination of the Bolshevik party. Soviet forces first assumed power in Petrograd The Russian Civil War (1917–1923) was a...
and was a Commissar for Ethnic Minorities (Komisar po delam inrodcheskim) of the independent Far Eastern Republic
Far Eastern Republic
The Far Eastern Republic , sometimes called the Chita Republic, was a nominally independent state that existed from April 1920 to November 1922 in the easternmost part of the Russian Far East...
. After the Far Eastern Republic was absorbed by Soviet Russia
Russian Soviet Federative Socialist Republic
The Russian Soviet Federative Socialist Republic , commonly referred to as Soviet Russia, Bolshevik Russia, or simply Russia, was the largest, most populous and economically developed republic in the former Soviet Union....
in 1922 Arsenyev refused to emigrate and stayed in Vladivostok.

Arseniev is most famous for authoring many books about his explorations, including some 60 works on the geography, wildlife and ethnography of the regions he traveled. Arseniev's most famous book, Dersu Uzala, is the author's memoirs of three expeditions in the Ussurian taiga
Taiga
Taiga , also known as the boreal forest, is a biome characterized by coniferous forests.Taiga is the world's largest terrestrial biome. In North America it covers most of inland Canada and Alaska as well as parts of the extreme northern continental United States and is known as the Northwoods...
, or forest, of Northern Asia along the Sea of Japan
Sea of Japan
The Sea of Japan is a marginal sea of the western Pacific Ocean, between the Asian mainland, the Japanese archipelago and Sakhalin. It is bordered by Japan, North Korea, Russia and South Korea. Like the Mediterranean Sea, it has almost no tides due to its nearly complete enclosure from the Pacific...
and North to Vladivostok
Vladivostok
The city is located in the southern extremity of Muravyov-Amursky Peninsula, which is about 30 km long and approximately 12 km wide.The highest point is Mount Kholodilnik, the height of which is 257 m...
. The book is named after Arseniev's guide, an Ussurian native of the Nanai/Goldi tribe. Eventually the book was made into two films, one by Soviet director Agasi Babayan in 1961, the other by Japanese filmmaker Akira Kurosawa
Akira Kurosawa
was a Japanese film director, producer, screenwriter and editor. Regarded as one of the most important and influential filmmakers in the history of cinema, Kurosawa directed 30 filmsIn 1946, Kurosawa co-directed, with Hideo Sekigawa and Kajiro Yamamoto, the feature Those Who Make Tomorrow ;...
in 1975. The latter Dersu Uzala
Dersu Uzala
Dersu Uzala is the title of a 1923 book by the Russian explorer Vladimir Arsenyev.-Plot:Arsenyev's book tells of his travels in the Ussuri basin in the Russian Far East. Dersu was the name of a Nanai hunter who acted as a guide for Arsenyev's surveying crew from 1902 to 1907, and saved them from...
version won that year's Oscar for Best Foreign-Language Film. The third book of Arsenyev's trilogy, In the Sikhote-Alin mountains was published posthumously, only in 1937.

Arseniev died at the age of 57 in 1930. His widow, Margarita Nikolaevna Arsenieva was arrested in 1934 and again in 1937 after being accused of being a member of an underground organization of spies and saboteurs allegedly headed by her late husband. The military court hearings of the case (21 August 1938) took only 10 minutes and sentenced her to death. She was executed immediately. Arsenyev's daughter Natalya also was arrested in April 1941 and sentenced to the Gulag
Gulag
The Gulag was the government agency that administered the main Soviet forced labor camp systems. While the camps housed a wide range of convicts, from petty criminals to political prisoners, large numbers were convicted by simplified procedures, such as NKVD troikas and other instruments of...

Arsenyev’s family home in Vladivostok
Vladivostok
The city is located in the southern extremity of Muravyov-Amursky Peninsula, which is about 30 km long and approximately 12 km wide.The highest point is Mount Kholodilnik, the height of which is 257 m...
has been made into a museum. Arsenyev
Arsenyev
Arsenyev is a town in Primorsky Krai, Russia, located about northeast of Vladivostok. Population: -History:The history of Arsenyev begins in 1895, when the settlement of Semyonovka was founded. The first settlement dwellers were the Old Believers. In 1901 the migrant peasants from what is now...
, a town located in Primorsky Krai
Primorsky Krai
Primorsky Krai , informally known as Primorye , is a federal subject of Russia . Primorsky means "maritime" in Russian, hence the region is sometimes referred to as Maritime Province or Maritime Territory. Its administrative center is in the city of Vladivostok...
, was named after him.