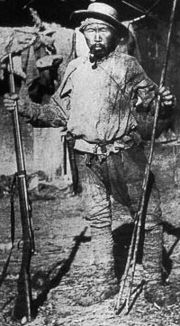 Dersu Uzala is the title of a 1923 book by the Russian explorer Vladimir Arsenyev
Vladimir Arsenyev
Vladimir Klavdiyevich Arsenyev was a Russian explorer of the Far East who recounted his travels in a series of books - "По Уссурийскому Краю" and "Дерсу Узала" - telling of his military journeys to the Ussuri basin with Dersu Uzala, a native hunter, from 1902 to 1907...
.

Arsenyev's book tells of his travels in the Ussuri basin in the Russian Far East
Russian Far East
Russian Far East is a term that refers to the Russian part of the Far East, i.e., extreme east parts of Russia, between Lake Baikal in Eastern Siberia and the Pacific Ocean...
. Dersu was the name of a Nanai  hunter (who lived c. 1850–1908) who acted as a guide for Arsenyev's surveying crew from 1902 to 1907, and saved them from starvation and cold. Arsenyev portrays him as a great man, animist
Animism
Animism refers to the belief that non-human entities are spiritual beings, or at least embody some kind of life-principle....
who sees animals and plants as equal to man. From 1907, Arsenyev invited Dersu to live in his house in Khabarovsk
Khabarovsk
Khabarovsk is the largest city and the administrative center of Khabarovsk Krai, Russia. It is located some from the Chinese border. It is the second largest city in the Russian Far East, after Vladivostok. The city became the administrative center of the Far Eastern Federal District of Russia...
as Dersu's failing sight hampered his ability to live as a hunter. In the spring of 1908, Dersu bade farewell to Arsenyev and walked back to his home in the Primorsky Krai
Primorsky Krai
Primorsky Krai , informally known as Primorye , is a federal subject of Russia . Primorsky means "maritime" in Russian, hence the region is sometimes referred to as Maritime Province or Maritime Territory. Its administrative center is in the city of Vladivostok...
, where he was killed. According to Arsenyev's book, Dersu Uzala was murdered near the town of Korfovskiy and buried in an unmarked grave in the taiga.