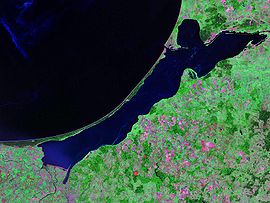 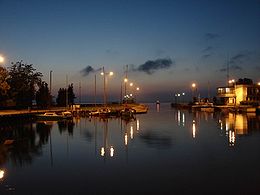 The Vistula Lagoon is a fresh water
Fresh Water
Fresh Water is the debut album by Australian rock and blues singer Alison McCallum, released in 1972. Rare for an Australian artist at the time, it came in a gatefold sleeve...
lagoon
Lagoon
A lagoon is a body of shallow sea water or brackish water separated from the sea by some form of barrier. The EU's habitat directive defines lagoons as "expanses of shallow coastal salt water, of varying salinity or water volume, wholly or partially separated from the sea by sand banks or shingle,...
on the Baltic Sea
Baltic Sea
The Baltic Sea is a brackish mediterranean sea located in Northern Europe, from 53°N to 66°N latitude and from 20°E to 26°E longitude. It is bounded by the Scandinavian Peninsula, the mainland of Europe, and the Danish islands. It drains into the Kattegat by way of the Øresund, the Great Belt and...
separated from Gdańsk Bay
Gdansk Bay
Gdańsk Bay or the Bay of Gdańsk or Danzig Bay is a southeastern bay of the Baltic Sea. It is named after the adjacent port city of Gdańsk in Poland and is sometimes referred to as a gulf.-Geography:...
by the Vistula Spit
Vistula Spit
The Vistula Spit is a spit, or peninsular stretch of land, which separates Vistula Lagoon from Gdańsk Bay in the Baltic Sea. The border between Poland and Kaliningrad Oblast, an exclave of Russia, bisects it, politically dividing the spit in half between the two countries. The westernmost point...
. It is sometimes known as the Vistula Bay
Headlands and bays
Headlands and bays are two related features of the coastal environment.- Geology and geography :Headlands and bays are often found on the same coastline. A bay is surrounded by land on three sides, whereas a headland is surrounded by water on three sides. Headlands are characterized by high,...
or Vistula Gulf. The modern German name, Frisches Haff, is derived from an earlier form, Friesisches Haff. Both this term and the earlier Polish name Zatoka Fryska translate "Frisian
Frisians
The Frisians are a Germanic ethnic group native to the coastal parts of the Netherlands and Germany. They are concentrated in the Dutch provinces of Friesland and Groningen and, in Germany, East Frisia and North Frisia, that was a part of Denmark until 1864. They inhabit an area known as Frisia...
Bay". In historical contexts, Frisches Haff can also refer to the Oder Lagoon.

The lagoon is a mouth of a few branches of the Vistula
Vistula
The Vistula is the longest and the most important river in Poland, at 1,047 km in length. The watershed area of the Vistula is , of which lies within Poland ....
River, notably the Nogat
Nogat
-----------------The Nogat is a 62km long delta branch of the Vistula River and does not empty at Gdańsk Bay as the main river does.The Nogat has its origin near the city of Biała Góra as an anabranch of the Vistula River. Shortly after the river Liwa flows into the Nogat. Than the river passes...
, and the Pregolya
Pregolya
The Pregolya or Pregola is a river in the Russian Kaliningrad Oblast exclave.It starts as a confluence of the Instruch and the Angrapa and drains into the Baltic Sea through Vistula Lagoon. Its length under the name of Pregolya is 123 km, 292 km including the Angrapa. The basin has an...
River. It is connected to Gdańsk Bay by the Strait of Baltiysk
Strait of Baltiysk
The Strait of Baltiysk is a strait in Kaliningrad Oblast, Russia, enabling passage from the Baltic Sea into the Vistula Lagoon. It separates the Sambian Peninsula and Vistula Spit...
.

Digging a canal to connect the lagoon with the Baltic Sea is in consideration as a major EU
European Union
The European Union is an economic and political union of 27 independent member states which are located primarily in Europe. The EU traces its origins from the European Coal and Steel Community and the European Economic Community , formed by six countries in 1958...
-supported project. The canal, 1 kilometre (0.621372736649807 mi) in length, would re-activate the Elblag port. It would also free its dependence on Russia, which time and again revokes the right of passage for Polish ships through Strait of Baltiysk
Strait of Baltiysk
The Strait of Baltiysk is a strait in Kaliningrad Oblast, Russia, enabling passage from the Baltic Sea into the Vistula Lagoon. It separates the Sambian Peninsula and Vistula Spit...
as a form of pressure on Polish authorities. It would cost an estimated PLN 80 million. However, major ecological considerations stand in the way. For example, mammal migration along the lagoon could be disrupted. Also, the inflow of brackish water
Brackish water
Brackish water is water that has more salinity than fresh water, but not as much as seawater. It may result from mixing of seawater with fresh water, as in estuaries, or it may occur in brackish fossil aquifers. The word comes from the Middle Dutch root "brak," meaning "salty"...
s from the Baltic sea could result in serious unbalancing of the lagoon's freshwater ecosystem.

From 1772 until 1918, the Lagoon was part of the Kingdom of Prussia
Kingdom of Prussia
The Kingdom of Prussia was a German kingdom from 1701 to 1918. Until the defeat of Germany in World War I, it comprised almost two-thirds of the area of the German Empire...
, which had become part of the German Empire
German Empire
The German Empire refers to Germany during the "Second Reich" period from the unification of Germany and proclamation of Wilhelm I as German Emperor on 18 January 1871, to 1918, when it became a federal republic after defeat in World War I and the abdication of the Emperor, Wilhelm II.The German...
in 1871. Between 1920 and 1945 it was split between Germany and the Free City of Danzig
Free City of Danzig
The Free City of Danzig was a semi-autonomous city-state that existed between 1920 and 1939, consisting of the Baltic Sea port of Danzig and surrounding areas....
. From January until March 1945 throughout the Evacuation of East Prussia
Evacuation of East Prussia
The evacuation of East Prussia refers to the evacuation of the German civilian population and military personnel in East Prussia and the Klaipėda region between 20 January, and March 1945, as part of the evacuation of German civilians towards the end of World War II...
refugees from East Prussia
East Prussia
East Prussia is the main part of the region of Prussia along the southeastern Baltic Coast from the 13th century to the end of World War II in May 1945. From 1772–1829 and 1878–1945, the Province of East Prussia was part of the German state of Prussia. The capital city was Königsberg.East Prussia...
crossed the frozen Lagoon on their way to the west after the Red Army
Red Army
The Workers' and Peasants' Red Army started out as the Soviet Union's revolutionary communist combat groups during the Russian Civil War of 1918-1922. It grew into the national army of the Soviet Union. By the 1930s the Red Army was among the largest armies in history.The "Red Army" name refers to...
had reached the coast of the Lagoon near Elbing
Elblag
Elbląg is a city in northern Poland with 127,892 inhabitants . It is the capital of Elbląg County and has been assigned to the Warmian-Masurian Voivodeship since 1999. Before then it was the capital of Elbląg Voivodeship and a county seat in Gdańsk Voivodeship...
on January 26. Attacked by Soviet fighter aircraft thousands of them were killed or broke through the ice.
Today the Vistula Lagoon is politically split between Poland
Poland
Poland , officially the Republic of Poland , is a country in Central Europe bordered by Germany to the west; the Czech Republic and Slovakia to the south; Ukraine, Belarus and Lithuania to the east; and the Baltic Sea and Kaliningrad Oblast, a Russian exclave, to the north...
and Russia
Russia
Russia or , officially known as both Russia and the Russian Federation , is a country in northern Eurasia. It is a federal semi-presidential republic, comprising 83 federal subjects...
's Kaliningrad Oblast
Kaliningrad Oblast
Kaliningrad Oblast is a federal subject of Russia situated on the Baltic coast. It has a population of The oblast forms the westernmost part of the Russian Federation, but it has no land connection to the rest of Russia. Since its creation it has been an exclave of the Russian SFSR and then the...
.