Encyclopedia
Villers-Bretonneux is a commune
Communes of France
The commune is the lowest level of administrative division in the French Republic. French communes are roughly equivalent to incorporated municipalities or villages in the United States or Gemeinden in Germany...
in the Somme
Somme
Somme is a department of France, located in the north of the country and named after the Somme river. It is part of the Picardy region of France....
department in Picardie
Picardie
Picardy is one of the 27 regions of France. It is located in the northern part of France.-History:The historical province of Picardy stretched from north of Noyon to Calais, via the whole of the Somme department and the north of the Aisne department...
in northern France
France
The French Republic , The French Republic , The French Republic , (commonly known as France , is a unitary semi-presidential republic in Western Europe with several overseas territories and islands located on other continents and in the Indian, Pacific, and Atlantic oceans. Metropolitan France...
.

Villers-Bretonneux is situated some 19 km due east of Amiens
Amiens
Amiens is a city and commune in northern France, north of Paris and south-west of Lille. It is the capital of the Somme department in Picardy...
, on the D1029 road and the A29 motorway
A29 autoroute
The A29 is a motorway in Normandy, northern France. The road is also European Route 44.-Route:The road connects the port of Le Havre with the A26 autoroute at Saint-Quentin...
. 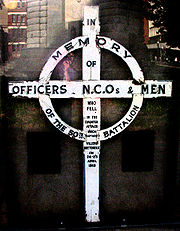 In the First World War
World War I
World War I , which was predominantly called the World War or the Great War from its occurrence until 1939, and the First World War or World War I thereafter, was a major war centred in Europe that began on 28 July 1914 and lasted until 11 November 1918...
, on 24 April 1918, the small town of Villers-Bretonneux was the site of the world's first battle between two tank
Tank
A tank is a tracked, armoured fighting vehicle designed for front-line combat which combines operational mobility, tactical offensive, and defensive capabilities...
forces: three British Mark IV
Mark I tank
The British Mark I was a tracked vehicle developed by the British Army during the First World War and the world's first combat tank. The Mark I entered service in August 1916, and was first used in action on the morning of 15 September 1916 during the Battle of Flers-Courcelette, of the Somme...
s against three German A7V
A7V
The A7V was a tank introduced by Germany in 1918, near the end of World War I. One hundred vehicles were ordered during the spring of 1918, but only 21 were delivered. It was nicknamed "The Moving Fortress" by the British because of the shape of the hull...
s. The Germans took the town, but that night and the next day it was recaptured by 4th and 5th Division of the AIF
First Australian Imperial Force
The First Australian Imperial Force was the main expeditionary force of the Australian Army during World War I. It was formed from 15 August 1914, following Britain's declaration of war on Germany. Generally known at the time as the AIF, it is today referred to as the 1st AIF to distinguish from...
at a cost of over twelve hundred Australian lives. The town's mayor spoke of the Australian troops on 14 July 1919 when unveiling a memorial in their honour:


"The first inhabitants of Villers-Bretonneux to re-establish themselves in the ruins of what was once a flourishing little town have, by means of donations, shown a desire to thank the valorous Australian Armies, who with the spontaneous enthusiasm and characteristic dash of their race, in a few hours drove out an enemy ten times their number...They offer a memorial tablet, a gift which is but the least expression of their gratitude, compared with the brilliant feat which was accomplished by the sons of Australia...Soldiers of Australia, whose brothers lie here in French soil, be assured that your memory will always be kept alive, and that the burial places of your dead will always be respected and cared for..."

The people of Villers-Bretonneux continue to express gratitude to Australia to this day. The Australian War Memorial in France is located just outside Villers-Bretonneux and in front of it lie the graves of over 770 Australian soldiers, as well as those of other British Empire
British Empire
The British Empire comprised the dominions, colonies, protectorates, mandates and other territories ruled or administered by the United Kingdom. It originated with the overseas colonies and trading posts established by England in the late 16th and early 17th centuries. At its height, it was the...
soldiers involved in the campaign. The school in Villers-Bretonneux was rebuilt using donations from school children of Victoria
Victoria (Australia)
Victoria is the second most populous state in Australia. Geographically the smallest mainland state, Victoria is bordered by New South Wales, South Australia, and Tasmania on Boundary Islet to the north, west and south respectively....
(many of whom had relatives perish in the town's liberation), and above every blackboard is the inscription "N'oublions jamais l'Australie" (Let us never forget Australia). The annual ANZAC Day
ANZAC Day
Anzac Day is a national day of remembrance in Australia and New Zealand, commemorated by both countries on 25 April every year to honour the members of the Australian and New Zealand Army Corps who fought at Gallipoli in the Ottoman Empire during World War I. It now more broadly commemorates all...
ceremony is held at this village on Anzac Day, 25 April, each year. Traditionally, Australian commemorations have focussed on Gallipoli
Gallipoli
The Gallipoli peninsula is located in Turkish Thrace , the European part of Turkey, with the Aegean Sea to the west and the Dardanelles straits to the east. Gallipoli derives its name from the Greek "Καλλίπολις" , meaning "Beautiful City"...
. However, the 2008 ANZAC Day commemoration focussed on the Western Front, and a special dawn service marking the 90th anniversary of the battle of 24/25 April 1918 was held on Anzac Day itself at Villers-Bretonneux.

Delacour’s château, or, as the Anzacs called it, the "Red château" served as headquarters and billets for the Generals during the Battle of the Somme. Marshal Foch
Foch
-People with the surname Foch:*Ferdinand Foch , Marshal of France and Allied Supreme Commander in World War I*Nina Foch , Dutch actress-Other uses:...
stayed there. At the end of fighting in November 1918 it became the local headquarters of the Imperial (later Commonwealth) Graves Commission.
Later abandoned, it was extensively cannibalised for rebuilding materials. Its skeleton, which remained as a tourist attraction until 2004, was razed in that year and all traces of it were removed, allegedly to make way for a supermarket.