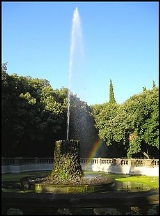 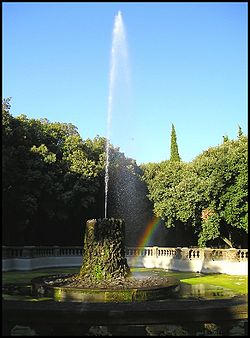 The Villa Torlonia in Frascati is a villa belonging to the Torlonia
Torlonia
200px|thumb|Coat of arms of the House of Torlonia.The princes Torlonia are an Italian noble family from Rome, who acquired a huge fortune in the 18th and 19th centuries through administering the finances of the Vatican.-History:...
family in Frascati
Frascati
Frascati is a town and comune in the province of Rome in the Lazio region of central Italy. It is located south-east of Rome, on the Alban Hills close to the ancient city of Tusculum. Frascati is closely associated with science, being the location of several international scientific...
, Italy
Italy
Italy , officially the Italian Republic languages]] under the European Charter for Regional or Minority Languages. In each of these, Italy's official name is as follows:;;;;;;;;), is a unitary parliamentary republic in South-Central Europe. To the north it borders France, Switzerland, Austria and...
.

The land on which the villa was built originally belonged to the Abbey of Grottaferrata, which donated it in 1563 to Annibal Caro, who commissioned a small villa where he spent the last years of his life, translating the Aeneid
Aeneid
The Aeneid is a Latin epic poem, written by Virgil between 29 and 19 BC, that tells the legendary story of Aeneas, a Trojan who travelled to Italy, where he became the ancestor of the Romans. It is composed of roughly 10,000 lines in dactylic hexameter...
. (In 1896, Prince Leopoldo Torlonia placed a memorial stone to remember this event.)

In 1607 Cardinal Scipione Borghese
Scipione Borghese
Scipione Borghese was an Italian Cardinal, art collector and patron of the arts. A member of the Borghese family, he was the patron of the painter Caravaggio and the artist Bernini...
, Paul V's nephew, took possession of the Villa; he enlarged and embellished it. The waterworks used to feed the fountains of the Villa and the spectacular Water Theatre with a water flight of steps, date to 1607-25, designed and directed by Girolamo Fontana, Carlo Maderno
Carlo Maderno
Carlo Maderno was a Swiss-Italian architect, born in Ticino, who is remembered as one of the fathers of Baroque architecture. His façades of Santa Susanna, St. Peter's Basilica and Sant'Andrea della Valle were of key importance in the evolution of the Italian Baroque...
and Flaminio Ponzio
Flaminio Ponzio
Flaminio Ponzio was an Italian architect during the late-Renaissance or so-called Mannerist period, serving in Rome as the architect for Pope Paul V.Ponzio was born in Viggiù near Varese, and he died in Rome...
and completed at the base with a large retaining wall with niches and fountains.

Other 17th and 18th century owners were the Cardinal Ludovisi
Ludovisi
Ludovisi can refer to:*Ludovisi , a noble Italian family*Ludovisi, Lazio, a rione in the City of Rome* Alberico Boncompagni Ludovisi, prince of Venosa and proprietor of Latium wine estate Fiorano...
, the Colonna family, the Conti family, and the Sforza Cesarini family. In the 19th century, the villa was acquired by Prince Torlonia whose name it commemorates. During the Napoleonic Age, the Torlonias profited by the Holy See's troubles and amassed a fortune by speculative transactions. Besides, they acquired titles and redeemed their plebeian extraction.

The villa's grand Baroque
Baroque
The Baroque is a period and the style that used exaggerated motion and clear, easily interpreted detail to produce drama, tension, exuberance, and grandeur in sculpture, painting, literature, dance, and music...
terraced gardens and fountains provided subjects for watercolors by the American painter John Singer Sargent
John Singer Sargent
John Singer Sargent was an American artist, considered the "leading portrait painter of his generation" for his evocations of Edwardian era luxury. During his career, he created roughly 900 oil paintings and more than 2,000 watercolors, as well as countless sketches and charcoal drawings...
and more others painters.

The old Villa was almost completely destroyed on September 8, 1943, when Frascati was bombed
Frascati bombing raid September 8, 1943
September 8, 1943 is the date of a bombing raid of USAAF planes against Frascati, a historical town near Rome, Italy. The target was the German General Headquarters for the Mediterranean zone and the Italian headquarters, scattered in buildings and Villas nearby the town.131 USAAF aircraft ...
. During that period it housed the court martial and SS detachment. After that numerous partisans from the Alban Hills
Alban Hills
The Alban Hills are the site of a quiescent volcanic complex in Italy, located southeast of Rome and about north of Anzio.The dominant peak is Monte Cavo. There are two small calderas which contain lakes, Lago Albano and Lake Nemi...
(Castelli Romani) area were transferred here and killed.

In 1954, the Duke Andrea Torlonia made an exchange of real property with the mayor Micara of Frascati between the "Gardens" of villa Torlonia and the "Quadrato estate": now the gardens are a public park.