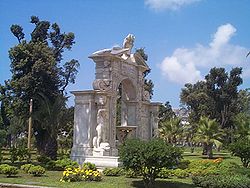 The park houses the Anton Dohrn
Anton Dohrn
Felix Anton Dohrn was a prominent German Darwinist and the founder and first director of the Stazione Zoologica, Naples, Italy.-Family history:...
aquarium, a renowned scientific institution built in the 1870s. The seaside road, via Caracciolo
Francesco Caracciolo
Prince Francesco Caracciolo was a Neapolitan admiral and revolutionist.-Early life and British service:Caracciolo was born in Naples to a noble family. He entered the navy and learned his seamanship under Rodney...
, which now lies between the aquarium and the sea, is another more recent reclamation project added to the city in 1900 to provide another connecting road between the city and the suburbs to the west.
The source of this article is wikipedia, the free encyclopedia.  The text of this article is licensed under the GFDL.