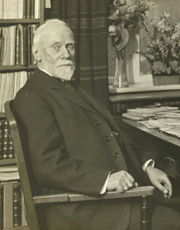 Vilhelm Ludwig Peter Thomsen (January 25, 1842 – May 12, 1927) was a Danish
Denmark
Denmark is a Scandinavian country in Northern Europe. The countries of Denmark and Greenland, as well as the Faroe Islands, constitute the Kingdom of Denmark . It is the southernmost of the Nordic countries, southwest of Sweden and south of Norway, and bordered to the south by Germany. Denmark...
linguist
Linguistics
Linguistics is the scientific study of human language. Linguistics can be broadly broken into three categories or subfields of study: language form, language meaning, and language in context....
. In 1893, he deciphered the Turkish Orkhon inscriptions in advance of his rival, Wilhelm Radloff. He also studied the origins of Russian and Finnish.

According to an article on "The history of Uralic linguistics" by Bo Wickman (1988:808),

The Danish scholar Vilhelm Thomsen (1842-1927) was one of the greatest linguists of all times. He was active in an astoundingly great number of linguistic disciplines, and he was equally masterful in all of them.

He is honored on a stela
Stele
A stele , also stela , is a stone or wooden slab, generally taller than it is wide, erected for funerals or commemorative purposes, most usually decorated with the names and titles of the deceased or living — inscribed, carved in relief , or painted onto the slab...
set up in central Copenhagen
Copenhagen
Copenhagen is the capital and largest city of Denmark, with an urban population of 1,199,224 and a metropolitan population of 1,930,260 . With the completion of the transnational Øresund Bridge in 2000, Copenhagen has become the centre of the increasingly integrating Øresund Region...
along with three other Danish pioneers of modern linguistics, Rasmus Rask
Rasmus Christian Rask
Rasmus Rask was a Danish scholar and philologist.-Biography:...
, N.L. Westergaard, and Karl Verner
Karl Verner
Karl Verner was a Danish linguist. He is remembered today for Verner's law, which he discovered in 1875.Verner, whose interest in languages was stimulated by reading about the work of Rasmus Christian Rask, began his university studies in 1864. He studied Oriental, Germanic and Slavic languages,...
.

A street is named after him in Ankara
Ankara
Ankara is the capital of Turkey and the country's second largest city after Istanbul. The city has a mean elevation of , and as of 2010 the metropolitan area in the entire Ankara Province had a population of 4.4 million....
, Turkey
Turkey
Turkey , known officially as the Republic of Turkey , is a Eurasian country located in Western Asia and in East Thrace in Southeastern Europe...
, Wilhelm Thomsen Caddesi (= 'Vilhelm Thomsen Street'), on which the National Library of Turkey
National Library of Turkey
Millî Kütüphane is the National Library of Turkey, located in Ankara. It was founded on April 15, 1946. Milli Kütüphane has one of the richest collections in Turkey. The collection consists of 2.945.009 items, which can be categorized as follows:...
is located. This is apparently because Thomsen's deciphering of the Orkhon inscriptions was perceived as an important contribution during the formative period of modern Turkish national identity at the turn of the 20th century.
The source of this article is wikipedia, the free encyclopedia.  The text of this article is licensed under the GFDL.