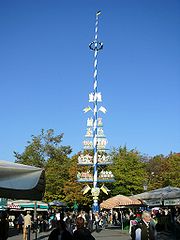 The Viktualienmarkt is a daily food market and a square in the center of Munich
Munich
Munich The city's motto is "" . Before 2006, it was "Weltstadt mit Herz" . Its native name, , is derived from the Old High German Munichen, meaning "by the monks' place". The city's name derives from the monks of the Benedictine order who founded the city; hence the monk depicted on the city's coat...
, Germany
Germany
Germany , officially the Federal Republic of Germany , is a federal parliamentary republic in Europe. The country consists of 16 states while the capital and largest city is Berlin. Germany covers an area of 357,021 km2 and has a largely temperate seasonal climate...
.

The Viktualienmarkt developed from an original farmers' market
Farmers' market
A farmers' market consists of individual vendors—mostly farmers—who set up booths, tables or stands, outdoors or indoors, to sell produce, meat products, fruits and sometimes prepared foods and beverages...
to a popular market for gourmet
Gourmet
Gourmet is a cultural ideal associated with the culinary arts of fine food and drink, or haute cuisine, which is characterised by elaborate preparations and presentations of large meals of small, often quite rich courses...
s. In an area covering 22000 m² (26,311.8 sq yd), 140 stalls and shops offer flowers, exotic fruit, game, poultry
Poultry
Poultry are domesticated birds kept by humans for the purpose of producing eggs, meat, and/or feathers. These most typically are members of the superorder Galloanserae , especially the order Galliformes and the family Anatidae , commonly known as "waterfowl"...
, spices, cheese, fish, juices and so on.

Most stalls and shops are open during the official opening hours (Monday to Saturday 8 a.m. until 8 p.m.); but the Biergarten doesn't open until 9 a.m. Many stalls close at 6 p.m., before the standard closing time. There are special opening hours for flower shops, bakeries and restaurants.

When today's Marienplatz
Marienplatz
Marienplatz is a central square in the city center of Munich, Germany. It has been the city's main square since 1158.-Architecture:...
(the former Schrannenplatz) as a market for cereal
Cereal
Cereals are grasses cultivated for the edible components of their grain , composed of the endosperm, germ, and bran...
s and other agricultural products had become too small, Viktualienmarkt as its official successor evolved where it is still situated today due to a decree issued by King Maximilian I on 2. May, 1807. The King
Monarch
A monarch is the person who heads a monarchy. This is a form of government in which a state or polity is ruled or controlled by an individual who typically inherits the throne by birth and occasionally rules for life or until abdication...
ordered that those parts of the market between Heiliggeist Church and Frauenstraße should be relocated and told the municipal authorities to demolish the buildings of the charitable Heiliggeist hospice which had been acquired by the city. Thus the "green market" had its own place, which was also named "market place" for some time. It was only later that the word "Viktualien" (victuals), which is a Latin
Latin
Latin is an Italic language originally spoken in Latium and Ancient Rome. It, along with most European languages, is a descendant of the ancient Proto-Indo-European language. Although it is considered a dead language, a number of scholars and members of the Christian clergy speak it fluently, and...
word for food, was used. From 1823 to 1829 the central market already had to be enlarged significantly. In 1885 the ancient Heiliggeist infirmary was demolished and the Heiliggeist Church was extended to the west. Thus a new image was created for both the market and the city. In 1852 the precursor of today's Großmarkthalle, the Schrannenhalle, was built close to the ancient city wall at the end of Blumenstraße. It burned down in 1932 and was reopened in 2005. In 1855 the fish market was moved to Westenriederstraße. In the course of time many additions were made to the market, as for example a butchers' hall, a tripe
Tripe
Tripe is a type of edible offal from the stomachs of various farm animals.-Beef tripe:...
hall, pavilions for bakeries, fruit vendors and a fish hall. The butchers' shops at the foot of Petersbergl (Peter's hill, site of Peter's Church), the stalls for poultry and venison and the stands of the flower vendors expanded even further. During World War II
World War II
World War II, or the Second World War , was a global conflict lasting from 1939 to 1945, involving most of the world's nations—including all of the great powers—eventually forming two opposing military alliances: the Allies and the Axis...
this square with its cosy atmosphere was severely damaged. There was even talk of closing down the market in order to erect multi-story buildings on this important site. Instead, the municipal authorities revitalised Viktualienmarkt with considerable financial support, and the citizens of Munich enriched it with memorial fountains for the folk singers and comedians Karl Valentin
Karl Valentin
Karl Valentin was a Bavarian comedian, cabaret performer, clown, author and film producer. He had significant influence on German Weimar culture...
, Weiß Ferdl and Liesl Karlstadt. Later, memorial fountains for the folk singers and comedians Ida Schumacher, Elise Aulinger
Elise Aulinger
-Selected filmography:* Martin Luther * Krambambuli * Wunschkonzert * Das sündige Dorf * Hanna Amon * Fear * Das sündige Dorf -External links:...
and Roider Jackl were added.

In a 2009 New York Times article about meals worth a plane trip across the Atlantic, food critic Mimi Sheraton picked a snack of sausages at the Viktualienmarkt.

The market also hosts a number of traditional and folkloric events such as weighing celebrities, brewers' day, gardeners' day, opening of the asparagus
Asparagus
Asparagus officinalis is a spring vegetable, a flowering perennialplant species in the genus Asparagus. It was once classified in the lily family, like its Allium cousins, onions and garlic, but the Liliaceae have been split and the onion-like plants are now in the family Amaryllidaceae and...
season, summer festival, dance of the market women on Shrove Tuesday
Shrove Tuesday
Shrove Tuesday is a term used in English-speaking countries, especially in Ireland, United Kingdom, Canada, Australia, New Zealand, Philippines, Germany, and parts of the United States for the day preceding Ash Wednesday, the first day of the season of fasting and prayer called Lent.The...
, etc. Hence the Viktualienmarkt, which has been a pedestrian zone since November 6, 1975 is also a meeting point and a place to chill.

The Viktualienmarkt is organized by the Wholesale Market Munich
Wholesale Market Munich
The Großmarkthalle München is an international wholesale market located in the Munich borough of Sendling. In an area of 310,000 m², 270 importing companies and wholesalers offer 140 different product classes from 83 countries with a sales volume of more than 750 million Euro...
. The Wholesale Market Munich, together with Viktualienmarkt, Elisabethmarkt
Elisabethmarkt
The Elisabethmarkt is a daily food market in Schwabing, a district of Munich, Germany.Deep in the heart of Schwabing, the inhabitants have been able to supply themselves with fresh groceries for more than 100 years...
, Pasing Viktualienmarkt
Pasing Viktualienmarkt
The Pasing Viktualienmarkt is a daily food market in Pasing, a district of Munich.Situated next to the Pasing town hall, in a beautiful courtyard, the Pasing Viktualienmarkt offers everything you could wish for: bread and cheese, fish and meat, flowers and herbs...
, Wiener Markt
Wiener Markt
The Wiener Markt is a daily food market in Haidhausen, a district of Munich.The market at Wiener Platz forms the centre of the district of Haidhausen. Here you can stock up on all the foods for your everyday needs...
and the Weekly Markets in Munich
Weekly Markets in Munich
The weekly markets in Munich, Germany, are an important source of food to the residents of the city. The population of the city is provided with groceries by 41 weekly markets, including farmers’ markets and organic-food markets on a daily basis...
, is a municipal company run by the City of Munich.