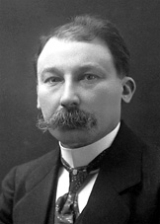 Encyclopedia
François Auguste Victor Grignard (May 6, 1871 in Cherbourg - December 13, 1935 in Lyon
Lyon
Lyon , is a city in east-central France in the Rhône-Alpes region, situated between Paris and Marseille. Lyon is located at from Paris, from Marseille, from Geneva, from Turin, and from Barcelona. The residents of the city are called Lyonnais....
) was a Nobel Prize
Nobel Prize
The Nobel Prizes are annual international awards bestowed by Scandinavian committees in recognition of cultural and scientific advances. The will of the Swedish chemist Alfred Nobel, the inventor of dynamite, established the prizes in 1895...
-winning French chemist
Chemist
A chemist is a scientist trained in the study of chemistry. Chemists study the composition of matter and its properties such as density and acidity. Chemists carefully describe the properties they study in terms of quantities, with detail on the level of molecules and their component atoms...
.

Grignard was the son of a sail maker. After studying mathematics at Lyon he transferred to chemistry and discovered the synthetic reaction bearing his name (the Grignard reaction
Grignard reaction
The Grignard reaction is an organometallic chemical reaction in which alkyl- or aryl-magnesium halides add to a carbonyl group in an aldehyde or ketone. This reaction is an important tool for the formation of carbon–carbon bonds...
) in 1900. He became a professor at the University of Nancy in 1910 and was awarded the Nobel Prize in Chemistry
Nobel Prize in Chemistry
The Nobel Prize in Chemistry is awarded annually by the Royal Swedish Academy of Sciences to scientists in the various fields of chemistry. It is one of the five Nobel Prizes established by the will of Alfred Nobel in 1895, awarded for outstanding contributions in chemistry, physics, literature,...
in 1912. During World War I
World War I
World War I , which was predominantly called the World War or the Great War from its occurrence until 1939, and the First World War or World War I thereafter, was a major war centred in Europe that began on 28 July 1914 and lasted until 11 November 1918...
he studied chemical warfare
Chemical warfare
Chemical warfare involves using the toxic properties of chemical substances as weapons. This type of warfare is distinct from Nuclear warfare and Biological warfare, which together make up NBC, the military acronym for Nuclear, Biological, and Chemical...
agents, particularly the manufacture of phosgene
Phosgene
Phosgene is the chemical compound with the formula COCl2. This colorless gas gained infamy as a chemical weapon during World War I. It is also a valued industrial reagent and building block in synthesis of pharmaceuticals and other organic compounds. In low concentrations, its odor resembles...
and the detection of mustard gas. His counterpart on the German side was another Nobel Prize winning Chemist, Fritz Haber
Fritz Haber
Fritz Haber was a German chemist, who received the Nobel Prize in Chemistry in 1918 for his development for synthesizing ammonia, important for fertilizers and explosives. Haber, along with Max Born, proposed the Born–Haber cycle as a method for evaluating the lattice energy of an ionic solid...
.


The Grignard reaction is an important means of preparing organic compounds from smaller precursor molecules. For this work, Grignard was awarded the Nobel Prize in Chemistry
Nobel Prize in Chemistry
The Nobel Prize in Chemistry is awarded annually by the Royal Swedish Academy of Sciences to scientists in the various fields of chemistry. It is one of the five Nobel Prizes established by the will of Alfred Nobel in 1895, awarded for outstanding contributions in chemistry, physics, literature,...
in 1912 jointly with fellow Frenchman Paul Sabatier
Paul Sabatier (chemist)
Paul Sabatier FRS was a French chemist, born at Carcassonne. He taught science classes most of his life before he became Dean of the Faculty of Science at the University of Toulouse in 1905....
.