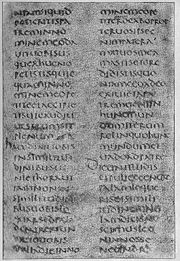 Vetus Latina is a collective name given to the Biblical
Bible
The Bible refers to any one of the collections of the primary religious texts of Judaism and Christianity. There is no common version of the Bible, as the individual books , their contents and their order vary among denominations...
texts in Latin
Latin
Latin is an Italic language originally spoken in Latium and Ancient Rome. It, along with most European languages, is a descendant of the ancient Proto-Indo-European language. Although it is considered a dead language, a number of scholars and members of the Christian clergy speak it fluently, and...
that were translated
Bible translations
The Bible has been translated into many languages from the biblical languages of Hebrew, Aramaic and Greek. Indeed, the full Bible has been translated into over 450 languages, although sections of the Bible have been translated into over 2,000 languages....
before St Jerome
Jerome
Saint Jerome was a Roman Christian priest, confessor, theologian and historian, and who became a Doctor of the Church. He was the son of Eusebius, of the city of Stridon, which was on the border of Dalmatia and Pannonia...
's Vulgate
Vulgate
The Vulgate is a late 4th-century Latin translation of the Bible. It was largely the work of St. Jerome, who was commissioned by Pope Damasus I in 382 to make a revision of the old Latin translations...
Bible (382
382
Year 382 was a common year starting on Saturday of the Julian calendar. At the time, it was known as the Year of the Consulship of Antonius and Syagrius...
-405
405
Year 405 was a common year starting on Sunday of the Julian calendar. At the time, it was known as the Year of the Consulship of Stilicho and Anthemius...
AD) became the standard Bible for Latin-speaking Western Christians
Western Christianity
Western Christianity is a term used to include the Latin Rite of the Catholic Church and groups historically derivative thereof, including the churches of the Anglican and Protestant traditions, which share common attributes that can be traced back to their medieval heritage...
. The phrase Vetus Latina is Latin for Old Latin, and the Vetus Latina is sometimes known as the Old Latin Bible. It was, however, written in Late Latin
Late Latin
Late Latin is the scholarly name for the written Latin of Late Antiquity. The English dictionary definition of Late Latin dates this period from the 3rd to the 6th centuries AD extending in Spain to the 7th. This somewhat ambiguously defined period fits between Classical Latin and Medieval Latin...
, not the early version of the Latin language known as Old Latin
Old Latin
Old Latin refers to the Latin language in the period before the age of Classical Latin; that is, all Latin before 75 BC...
.

There was no single "Vetus Latina" Bible; there are, instead, a collection of Biblical manuscript
Manuscript
A manuscript or handwrite is written information that has been manually created by someone or some people, such as a hand-written letter, as opposed to being printed or reproduced some other way...
texts that bear witness to Latin translations of Biblical passages that preceded Jerome's. After comparing readings for Luke
Gospel of Luke
The Gospel According to Luke , commonly shortened to the Gospel of Luke or simply Luke, is the third and longest of the four canonical Gospels. This synoptic gospel is an account of the life and ministry of Jesus of Nazareth. It details his story from the events of his birth to his Ascension.The...
24:4-5 in Vetus Latina manuscripts, Bruce Metzger
Bruce Metzger
Bruce Manning Metzger was a professor at Princeton Theological Seminary and Bible editor who served on the board of the American Bible Society. He was a scholar of Greek, New Testament and Old Testament, and wrote prolifically on these subjects.- Biography :Metzger was born in Middletown,...
counted "no fewer than 27 variant readings!" To these witnesses of previous translations, many scholars frequently add quotations of Biblical passages that appear in the works of the Latin Fathers, some of which share readings with certain groups of manuscripts. As such, many of the Vetus Latina "versions" were generally not promulgated in their own right as translations of the Bible to be used in the whole Church; rather, many of the texts that form part of the Vetus Latina were prepared on an ad hoc basis for the local use of Christian communities, to illuminate another Christian discourse or sermon
Sermon
A sermon is an oration by a prophet or member of the clergy. Sermons address a Biblical, theological, religious, or moral topic, usually expounding on a type of belief, law or behavior within both past and present contexts...
, or as the Latin half of a diglot manuscript (e.g. Codex Bezae
Codex Bezae
The Codex Bezae Cantabrigensis, designated by siglum Dea or 05 , δ 5 , is a codex of the New Testament dating from the 5th century written in an uncial hand on vellum. It contains, in both Greek and Latin, most of the four Gospels and Acts, with a small fragment of the 3 John...
). There are some Old Latin texts that seem to have aspired to greater stature or currency; several manuscripts of Old Latin Gospel
Gospel
A gospel is an account, often written, that describes the life of Jesus of Nazareth. In a more general sense the term "gospel" may refer to the good news message of the New Testament. It is primarily used in reference to the four canonical gospels of Matthew, Mark, Luke, and John...
s exist, containing the four canonical Gospels; the several manuscripts that contain them differ substantially from one another. Other Biblical passages, however, are extant only in excerpts or fragments.

The language of the Old Latin translations is uneven in quality, as Augustine of Hippo
Augustine of Hippo
Augustine of Hippo , also known as Augustine, St. Augustine, St. Austin, St. Augoustinos, Blessed Augustine, or St. Augustine the Blessed, was Bishop of Hippo Regius . He was a Latin-speaking philosopher and theologian who lived in the Roman Africa Province...
lamented in De Doctrina Christiana (2, 16). Grammatical solecism
Solecism
In traditional prescriptive grammar, a solecism is something perceived as a grammatical mistake or absurdity, or even a simply non-standard usage. The word was originally used by the Greeks for what they perceived as mistakes in their language...
s abound; some reproduce literally Greek
Greek language
Greek is an independent branch of the Indo-European family of languages. Native to the southern Balkans, it has the longest documented history of any Indo-European language, spanning 34 centuries of written records. Its writing system has been the Greek alphabet for the majority of its history;...
or Hebrew
Hebrew language
Hebrew is a Semitic language of the Afroasiatic language family. Culturally, is it considered by Jews and other religious groups as the language of the Jewish people, though other Jewish languages had originated among diaspora Jews, and the Hebrew language is also used by non-Jewish groups, such...
idioms as they appear in the Septuagint. Likewise, the various Old Latin translations reflect the various versions of the Septuagint circulating, with the African manuscripts (such as the Codex Bobiensis
Codex Bobiensis
Codex Bobiensis is a fragmentary Latin manuscript of the bible. Specifically, it is an example of a Vetus Latina bible, which were used from the 2nd century until Jerome's Latin translation, the Vulgate, was written in the 5th century. The text contains parts of the Gospel of Mark and Gospel of...
) preserving readings of the Western text-type
Western text-type
The Western text-type is one of several text-types used in textual criticism to describe and group the textual character of Greek New Testament manuscripts...
, while readings in the European manuscripts are closer to the Byzantine text-type
Byzantine text-type
The Byzantine text-type is one of several text-types used in textual criticism to describe the textual character of Greek New Testament manuscripts. It is the form found in the largest number of surviving manuscripts, though not in the oldest...
. Many grammatical idiosyncrasies come from the use of Vulgar Latin
Vulgar Latin
Vulgar Latin is any of the nonstandard forms of Latin from which the Romance languages developed. Because of its nonstandard nature, it had no official orthography. All written works used Classical Latin, with very few exceptions...
grammatical forms in the text.

With the publication of Jerome's Vulgate, which offered a single, stylistically consistent Latin text translated from the original tongues, the Vetus Latina gradually fell out of use. Jerome, in a letter, complains that his new version was initially disliked by Christians who were familiar with the phrasing of the old translations. However, as copies of the complete Bible were infrequently found, Old Latin translations of various books of the Bible were copied into manuscripts alongside Vulgate translations, inevitably exchanging readings; Old Latin translations of single books can be found in manuscripts as late as the 13th century. However, the Vulgate generally displaced the Vetus Latina and was acknowledged as the official Bible of the Roman Catholic Church
Roman Catholic Church
The Catholic Church, also known as the Roman Catholic Church, is the world's largest Christian church, with over a billion members. Led by the Pope, it defines its mission as spreading the gospel of Jesus Christ, administering the sacraments and exercising charity...
at the Council of Trent
Council of Trent
The Council of Trent was the 16th-century Ecumenical Council of the Roman Catholic Church. It is considered to be one of the Church's most important councils. It convened in Trent between December 13, 1545, and December 4, 1563 in twenty-five sessions for three periods...
.

The following comparison is of Luke 6:1-4, taken from the Old Latin text in the Codex Bezae
Codex Bezae
The Codex Bezae Cantabrigensis, designated by siglum Dea or 05 , δ 5 , is a codex of the New Testament dating from the 5th century written in an uncial hand on vellum. It contains, in both Greek and Latin, most of the four Gospels and Acts, with a small fragment of the 3 John...
:

Probably the most well known difference between the Old Latin and the Vulgate is in the Pater Noster
Pater Noster
Pater Noster is probably the best-known prayer in Christianity.Pater Noster or Paternoster may also refer to:* Paternoster, a passenger elevator which consists of a chain of open compartments that move slowly in a loop up and down inside a building* Paternoster, Western Cape, South Africa* Pierres...
, where the phrase from the Vetus Latina, quotidianum panem, "daily bread", becomes supersubstantialem panem, "supersubstantial
Epiousios
Epiousios is a Greek word used in the fourth petition of the Lord's Prayer, as recorded in the Gospel of Matthew and the Gospel of Luke . The word is not found elsewhere in Classical Greek literature. The term was rendered as cotidianum in the Vetus Latina and revised to supersubstantialem in...
bread" in the Vulgate.