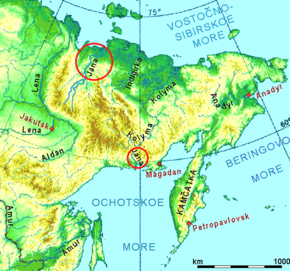 The Verkhoyansk Range is a mountain range
Mountain range
A mountain range is a single, large mass consisting of a succession of mountains or narrowly spaced mountain ridges, with or without peaks, closely related in position, direction, formation, and age; a component part of a mountain system or of a mountain chain...
of eastern Siberia
Siberia
Siberia is an extensive region constituting almost all of Northern Asia. Comprising the central and eastern portion of the Russian Federation, it was part of the Soviet Union from its beginning, as its predecessor states, the Tsardom of Russia and the Russian Empire, conquered it during the 16th...
, spanning ca. 1000 km (600 m.), across the Sakha Republic. It forms a vast arc between the Lena
Lena River
The Lena is the easternmost of the three great Siberian rivers that flow into the Arctic Ocean . It is the 11th longest river in the world and has the 9th largest watershed...
and Aldan
Aldan River
The Aldan River is the second-longest tributary of the Lena River in the Sakha Republic in eastern Siberia. The river is 2,273 km long, of which around 1,600 km is navigable. It was part of the River Route to Okhotsk...
rivers to the west and the Yana River
Yana River
The Yana River , is a river in Sakha in Russia, located between the Lena to the west and the Indigirka to the east.It is 872 km in length. The area of its basin is 238,000 km², whilst its annual discharge totals approximately . Most of this discharge occurs in May and June as the ice on the...
to the east. It rises to ca. 2,480 m (8,150 ft) in the south. There are coal
Coal
Coal is a combustible black or brownish-black sedimentary rock usually occurring in rock strata in layers or veins called coal beds or coal seams. The harder forms, such as anthracite coal, can be regarded as metamorphic rock because of later exposure to elevated temperature and pressure...
, silver
Silver
Silver is a metallic chemical element with the chemical symbol Ag and atomic number 47. A soft, white, lustrous transition metal, it has the highest electrical conductivity of any element and the highest thermal conductivity of any metal...
, lead
Lead
Lead is a main-group element in the carbon group with the symbol Pb and atomic number 82. Lead is a soft, malleable poor metal. It is also counted as one of the heavy metals. Metallic lead has a bluish-white color after being freshly cut, but it soon tarnishes to a dull grayish color when exposed...
, and zinc
Zinc
Zinc , or spelter , is a metallic chemical element; it has the symbol Zn and atomic number 30. It is the first element in group 12 of the periodic table. Zinc is, in some respects, chemically similar to magnesium, because its ion is of similar size and its only common oxidation state is +2...
deposits
Deposition (geology)
Deposition is the geological process by which material is added to a landform or land mass. Fluids such as wind and water, as well as sediment flowing via gravity, transport previously eroded sediment, which, at the loss of enough kinetic energy in the fluid, is deposited, building up layers of...
. It lies just west of the boundary of the Eurasian
Eurasian Plate
The Eurasian Plate is a tectonic plate which includes most of the continent of Eurasia , with the notable exceptions of the Indian subcontinent, the Arabian subcontinent, and the area east of the Chersky Range in East Siberia...
and the North American
North American Plate
The North American Plate is a tectonic plate covering most of North America, Greenland, Cuba, Bahamas, and parts of Siberia, Japan and Iceland. It extends eastward to the Mid-Atlantic Ridge and westward to the Chersky Range in eastern Siberia. The plate includes both continental and oceanic crust...
tectonic plates.

The world's lowest temperature
Temperature
Temperature is a physical property of matter that quantitatively expresses the common notions of hot and cold. Objects of low temperature are cold, while various degrees of higher temperatures are referred to as warm or hot...
s for inhabited places have been recorded in this region, and there is quite deep snow cover for most of the year. During the Last Glacial Maximum
Last Glacial Maximum
The Last Glacial Maximum refers to a period in the Earth's climate history when ice sheets were at their maximum extension, between 26,500 and 19,000–20,000 years ago, marking the peak of the last glacial period. During this time, vast ice sheets covered much of North America, northern Europe and...
the range contained extensive glacier
Glacier
A glacier is a large persistent body of ice that forms where the accumulation of snow exceeds its ablation over many years, often centuries. At least 0.1 km² in area and 50 m thick, but often much larger, a glacier slowly deforms and flows due to stresses induced by its weight...
s, and the scenery in the summer is typical of "alpine" mountains.