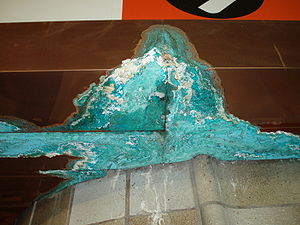 The name verdigris comes from the Middle English
Middle English
Middle English is the stage in the history of the English language during the High and Late Middle Ages, or roughly during the four centuries between the late 11th and the late 15th century....
vertegrez, from the Old French
Old French
Old French was the Romance dialect continuum spoken in territories that span roughly the northern half of modern France and parts of modern Belgium and Switzerland from the 9th century to the 14th century...
verte grez, an alteration of vert-de-Grèce ("green of Greece
Greece
Greece , officially the Hellenic Republic , and historically Hellas or the Republic of Greece in English, is a country in southeastern Europe....
"). The modern French spelling of this word is vert-de-gris. Since it was used as a pigment in paintings and other art objects (as green color), it was required by artists in Greece. It was originally made by hanging copper plates over hot vinegar in a sealed pot until a green crust formed on the copper. Another method of obtaining verdigris pigment, used in the Middle Ages, was to attach copper strips to a wooden block with acetic acid, then bury the sealed block in dung. A few weeks later the pot was dug up and the verdigris scraped off. One method used in the early nineteenth century had to do with reacting copper sulfate solution with solutions of lead, barium, or calcium acetate. Their sulfates are insoluble, forming precipitates and leaving the copper acetate in solution.

It is used industrially as a fungicide
Fungicide
Fungicides are chemical compounds or biological organisms used to kill or inhibit fungi or fungal spores. Fungi can cause serious damage in agriculture, resulting in critical losses of yield, quality and profit. Fungicides are used both in agriculture and to fight fungal infections in animals...
, a catalyst for organic reactions, and in dyeing (The Merck Index , Ninth Ed., 1976). Verdigris has also been used in medicine.

Verdigris fell out of use by artists as more stable green pigments became available.

Copper(II) acetate is soluble in alcohol and water and slightly soluble in ether and glycerol. It melts at 115 °C and decomposes at 240 °C. It can be prepared by reacting copper(II) oxide
Copper(II) oxide
Copper oxide or cupric oxide is the higher oxide of copper. As a mineral, it is known as tenorite.-Chemistry:It is a black solid with an ionic structure which melts above 1200 °C with some loss of oxygen...
, CuO, or copper(II) carbonate
Copper(II) carbonate
Copper carbonate is a blue-green compound forming part of the verdigris patina that is found on weathered brass, bronze, and copper. The colour can vary from bright blue to green, because there may be a mixture of both copper carbonate and basic copper carbonate in various stages of hydration...
, CuCO3, with acetic acid
Acetic acid
Acetic acid is an organic compound with the chemical formula CH3CO2H . It is a colourless liquid that when undiluted is also called glacial acetic acid. Acetic acid is the main component of vinegar , and has a distinctive sour taste and pungent smell...
, CH3COOH.

Verdigris is a variable chemical mixture of compounds, complexes and water. The primary components are copper salts of acetate, carbonate, chloride, formate, hydroxide and sulfate. The secondary components are other metallic salts, acids (organic and mineral), atmospheric gases and water. All the components are in an ever-changing and extremely sophisticated electrochemical reaction equilibrium that is dependent on the ambient environment.

As verdigris consists of various poisonous copper compounds, one should always wash one's hands after handling.