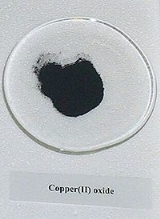 Overview
Copper oxide or cupric oxide (CuO) is the higher oxide
Oxide
An oxide is a chemical compound that contains at least one oxygen atom in its chemical formula. Metal oxides typically contain an anion of oxygen in the oxidation state of −2....
of copper
Copper
Copper is a chemical element with the symbol Cu and atomic number 29. It is a ductile metal with very high thermal and electrical conductivity. Pure copper is soft and malleable; an exposed surface has a reddish-orange tarnish...
. As a mineral, it is known as tenorite
Tenorite
Tenorite is a copper oxide mineral with the simple formula CuO.-Occurrence:Tenorite occurs in the weathered or oxidized zone associated with deeper primary copper sulfide orebodies. Tenorite commonly occurs with chrysocolla and the copper carbonates, azurite and malachite. The dull grey-black color...
.
It is a black solid with an ionic structure which melts above 1200 °C with some loss of oxygen
Oxygen
Oxygen is the element with atomic number 8 and represented by the symbol O. Its name derives from the Greek roots ὀξύς and -γενής , because at the time of naming, it was mistakenly thought that all acids required oxygen in their composition...
. It can be formed by heating copper in air:

Here, it is formed along with copper(I) oxide
Copper(I) oxide
Copper oxide or cuprous oxide is the inorganic compound with the formula Cu2O. It is one of the principal oxides of copper. This red-coloured solid is a component of some antifouling paints. The compound can appear either yellow or red, depending on the size of the particles, but both forms...
as a side product; thus, it is better prepared by heating copper(II) nitrate
Copper(II) nitrate
Copper nitrate is the chemical compound with the formula Cu2. Commonly referred to simply as copper nitrate, the anhydrous form is a blue, crystalline solid...
, copper(II) hydroxide
Copper(II) hydroxide
Copper hydroxide is the hydroxide of the metal copper with the chemical formula of Cu2. Copper hydroxide is a pale blue, gelatinous solid. Some forms of copper hydroxide are sold as "stabilized" copper hydroxide, quite likely a mixture of copper carbonate and hydroxide...
or copper(II) carbonate
Copper(II) carbonate
Copper carbonate is a blue-green compound forming part of the verdigris patina that is found on weathered brass, bronze, and copper. The colour can vary from bright blue to green, because there may be a mixture of both copper carbonate and basic copper carbonate in various stages of hydration...
:

Copper(II) oxide is a basic oxide
Basic oxide
A basic oxide is an oxide that shows basic properties in opposition to acidic oxides and that either*reacts with water to form a base; or*reacts with an acid to form a salt.Examples include:*Sodium oxide which reacts with water to produce sodium hydroxide...
, so it dissolves in mineral acid
Mineral acid
A mineral acid is an acid derived from one or more inorganic compounds. A mineral acid is not organic and all mineral acids release hydrogen ions when dissolved in water.-Characteristics:...
s such as hydrochloric acid
Hydrochloric acid
Hydrochloric acid is a solution of hydrogen chloride in water, that is a highly corrosive, strong mineral acid with many industrial uses. It is found naturally in gastric acid....
, sulfuric acid
Sulfuric acid
Sulfuric acid is a strong mineral acid with the molecular formula . Its historical name is oil of vitriol. Pure sulfuric acid is a highly corrosive, colorless, viscous liquid. The salts of sulfuric acid are called sulfates...
or nitric acid
Nitric acid
Nitric acid , also known as aqua fortis and spirit of nitre, is a highly corrosive and toxic strong acid.Colorless when pure, older samples tend to acquire a yellow cast due to the accumulation of oxides of nitrogen. If the solution contains more than 86% nitric acid, it is referred to as fuming...
to give the corresponding copper(II) salts:

It reacts with concentrated alkali to form the corresponding cuprate salts:

It can also be reduced to copper
Copper
Copper is a chemical element with the symbol Cu and atomic number 29. It is a ductile metal with very high thermal and electrical conductivity. Pure copper is soft and malleable; an exposed surface has a reddish-orange tarnish...
metal using hydrogen
Hydrogen
Hydrogen is the chemical element with atomic number 1. It is represented by the symbol H. With an average atomic weight of , hydrogen is the lightest and most abundant chemical element, constituting roughly 75% of the Universe's chemical elemental mass. Stars in the main sequence are mainly...
or carbon monoxide
Carbon monoxide
Carbon monoxide , also called carbonous oxide, is a colorless, odorless, and tasteless gas that is slightly lighter than air. It is highly toxic to humans and animals in higher quantities, although it is also produced in normal animal metabolism in low quantities, and is thought to have some normal...
:

At what temperature does copper release copper fumes? Is it at the boiling point of 4700 degrees?
More
x